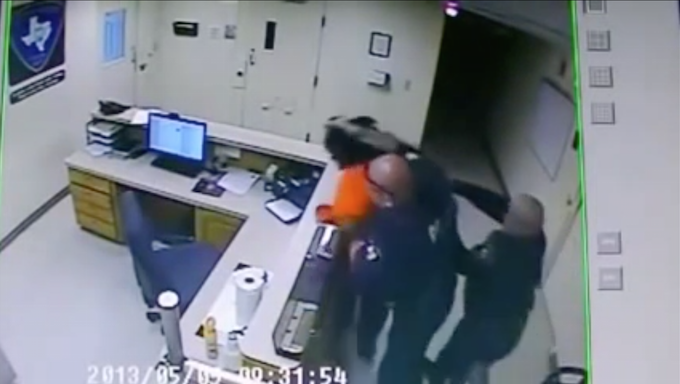 Keyarika Diggles was suspected of failing to finish paying off her traffic tickets. Diggles, a single mother of two, had been making payments, but she still owed more than $100. That led two Jasper police officers, Ricky Grissom and Ryan Cunningham, to her door in May, 2013, to serve a warrant. Diggles was arrested, and what happened in the jail made headlines in East Texas: In a videotaped encounter, Grissom and Cunningham grab Diggles by the hair, slam her head into a counter, pin her down just off-camera for about fifteen seconds, and then drag her around the room by the leg.

The video is hard to watch—and a civil suit filed by Diggles led to a $75,000 settlement against the city, the officers, the mayor, the police captain, and the dispatcher in the room (who can be seen near the end of the video). What it didn’t lead to was an indictment of Grissom and Cunningham, as a grand jury opted not to charge them last month. According to the Beaumont Enterprise, that was a surprise to Diggles’ lawyer.

Her attorney, Cade Bernsen, said he was disgusted by the grand jury’s decision not to indict the officers.

“We are shocked by the failure of the prosecutor to get an indictment,” he said. “I’m wondering what investigation was done because the video speaks for itself.”

“The video speaks for itself” is a sentiment that’s familiar nationally right now, in a higher-profile case than the one that occurred in Jasper: the on-camera death by asphyxiation of Eric Garner, who was stopped by New York police on suspicion of selling individual cigarettes.

A friend of Garner’s, Ramsey Orta, caught the encounter on video. And a report from the New York City medical examiner’s office ruled the death a homicide:

The New York City medical examiner’s office also offered pertinent facts when it classified Garner’s death as a homicide this summer. He died because of a “compression of neck (chokehold), compression of chest and prone positioning during physical restraint by police,” the office found, while also calling Garner’s “acute and chronic bronchial asthma, obesity and hypertensive cardiovascular disease” contributing factors.

That is to say, there’s a broad spectrum of people who seem to agree that video of police using violence on civilians—in New York or in Jasper—is evidence of wrongdoing. And after the Ferguson grand jury failed to indict Darren Wilson, a push has been made to mandate body cameras for police officers to capture that video. In Dallas, DA-elect Susan Hawk promised to use forfeiture funds to buy cameras for officers; in Denton, every officer will soon be equipped; rising-star Congressman Joaquin Castro tweeted his support for the measure; Houston Police Chief Charles A. McClelland, Jr. told the Houston Chronicle that “because of the incident that happened in Ferguson, I just think that it’s a matter of time before every law enforcement agency in the United States has body cameras.” President Obama echoed the sentiments just before the grand jury issued its decision in regards to Garner. But if video of Garner’s death exists, and of Diggles’ beating, and the officers in both cases weren’t prosecuted, it’s worth asking: How much more accountable are the police really if we have the means to record their actions?

Companies that manufacture and sell body cameras are presumably pretty enthusiastic about all of the high-profile public support for adding more of the devices, and few would argue that they’re a bad idea. But it’s also fairly clear that the ongoing conflicts between police and the people they’re hired to protect that have come to a head in recent weeks aren’t something that can be solved with technology, or by throwing money at the problem.

The racial divide revealed by the incidents in Ferguson and Eric Garner’s case—a divide that officials in Jasper, which has had historic issues with race, are working hard to insist doesn’t exist—is, in other words, probably not something that we, as a society, can buy our way out of.

Video evidence is useful. As Patrick Michels at the Texas Observer notes, the existence of video in Diggles’ case resulted in Cunningham and Grissom being fired. “That alone was a stronger response than many allegations of police brutality get,” Michels writes, also pointing to the civil rights lawsuit that Diggles settled for $75,000. But grand juries, to this point, seem unmoved.

It’s unclear in Diggles’ case why no indictment was issued. In New York, legal experts suggest that the prosecutor in the Garner case didn’t want to see an indictment, a similar charge to the ones made about St. Louis County District Attorney Robert McCulloch. Before long, we’ll see how much weight video evidence carries in Cleveland, Ohio, where police shot and killed 12-year-old Tamir Rice, who had been playing with a pellet gun at a park a few minutes before police arrived and shot him instantly.

But if the video evidence there fails to convince a grand jury that a crime was committed, it won’t be much of a surprise to people who’ve followed cases everywhere from Jasper to New York. And the solution offered by Obama and Castro, and invested heavily in by police departments in throughout Texas and beyond, will once more seem to be, at best, a small part of a solution that needs to be much, much larger.