If he ever gets around to it, University of Texas interim athletic director Mike Perrin will have to fire a damn good man in Charlie Strong. Perrin, who might like to return to his law practice soon, was busy tweeting about Jordan Spieth’s Australian Open win Monday morning while Strong attended an awkward news conference.

Various outlets, including the Austin American-Statesman and ESPN, had already reported his firing Sunday, but Strong told ESPN’s Kirk Herbstreit he hadn’t been informed of that news by anyone in power at UT. A report in the Statesman on Monday said some players were threatening to boycott Friday’s home game against TCU in a show of support for Strong. If only the players had shown that much fight against Kansas on Saturday it might not have come to this.

“Next year, I want to come back,” Strong said Monday at a news conference attended by many of his players. “I look at the job this staff has done and look at the players they’ve put in place. The wins and losses, they don’t stack up, but still, you’re looking at a young football team, a team that when you get everything back in place for the coming year has a lot of talent.”

It sounds like a coach who isn’t going to make it easy for his bosses, and I applaud that. But the Horns will now embark on their second coaching search since Mack Brown was reportedly forced out after the 2013 season. Maybe the fact Strong felt like the third or fourth choice when he was hired was a sign of things to come. He was given the benefit of the doubt after going 6-7 in 2014 because Brown hadn’t left him with much. Strong quickly dismissed nine players as he talked about his list of core values. The NFL’s high sheriff himself, Roger Goodell, stopped by campus to see first-hand how Strong was changing the culture.

Strong seemed to form an impressive bond with recruits and players, but it never translated to wins. He heads into Friday’s game with a 16-20 record, which is the worst winning percentage in school history. The loss to Kansas on Saturday made Strong’s firing an easy decision for president Greg Fenves and Perrin, who has seemed in over his head this season. Former athletic director DeLoss Dodds has to feel good about the timing of his own retirement. He went out with Brown, who didn’t comment on Strong’s future Saturday night on ABC because of his “ties” to the school, according to a tweet from ESPN anchor Stan Verrett.

Strong’s tenure was undermined by a high rate of turnover on his staff. He demoted offensive coordinator Shawn Watson early in the 2015 season and then took over play-calling duties from defensive coordinator Vance Bedford this season. It took a traveling party of Fenves, Perrin, and Strong to convince Tulsa offensive coordinator Sterlin Gilbert, a member of the Art Briles coaching tree, to take the same role at UT. Now it’s pretty obvious why TCU co-offensive coordinator Sonny Cumbie and Gilbert were so reluctant to leave jobs despite the prospect of large raises.

It’s also sad that a program that’s not exactly steeped in diversity when it comes to coaching hires will fire an African-American head coach after three years. The Horns sat on the sidelines when other SWC teams such as SMU and Baylor were integrating their rosters in the late sixties. Strong embraced the historic nature of his hiring, but he’ll see it come to an abrupt ending.

The best argument for keeping Strong is to see what Mike MacIntyre has done for the Colorado Buffaloes in his fourth season on campus. But the Buffs had gone through a long drought after the Bill McCartney years and have a more patient, if not apathetic, fanbase. Even though Strong has recruited relatively well, it’s hard to say this program’s made any progress. And it’s a hard truth that Strong’s off-the-field successes don’t compensate for 20 losses in three seasons.

What happens next? To start, every booster this side of Red McCombs will be in Fenves’ ear about who to hire. University of Houston coach Tom Herman is a no-brainer. He’s gone 6-0 against ranked opponents since taking over in 2015. Herman, the offensive coordinator on Urban Meyer’s staff when Ohio State won the national title in 2014, once served as a graduate assistant under Brown at UT. It once seemed unlikely the Horns would be hiring a head coach from a non-Power 5 conference, but times have changed. Herman has plenty of credibility and he had more success at Houston than the former Cougars head coach now walking the Texas A&M sideline, Kevin Sumlin. There’s simply no way Herman can stay at Houston if the Horns come calling. The athletic director who hired him at Houston, Mack Rhoades, is now the AD at Baylor. Sources have told me the Bears aren’t pursuing Herman at this time.

I think there’s enough talent for Herman to win immediately at Texas. And I’m talking about 9 or 10 wins. Having a quarterback in place (Shane Buechele) should help him get a running start. The Horns spent too much time during the last search chasing Nick Saban. (There are still folks who swear he was ready to take the job if Brown’s final days hadn’t been so awkward.) The Horns can reach out to Clemson’s Dabo Swinney and Florida State’s Jimbo Fisher if they want, but I’d just try to stick the landing with Herman. Sometimes the best hires are the most obvious ones.

Strong won’t have a tough time landing a defensive coordinator job, and hopefully he’ll have another shot at being a head coach. He’s as good a man as has ever walked the sideline in Austin, but he didn’t win enough games.

The fact he’s left it a better place than when he arrived will offer him little solace. Maybe replacing an icon like Brown wasn’t as easy as we thought. 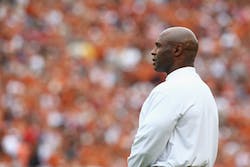 Why I Want Texas to Keep Charlie Strong