By her own proclamation on Saturday morning, Jill Soloway is the “lesbian L. Ron Hubbard.” During her SXSW keynote speech on Saturday morning, the creator of award-winning show Transparent and the upcoming Marfa-set series I Love Dick, promised the audience Hubbard-like wild success in Hollywood if they only used her simple set of tools. She was kidding, of course, about the L. Ron comparison, but not about the tools. In fact, Soloway devoted much of her presentation to advising aspiring filmmakers, specifically those who are female, of color, queer, disabled, or otherwise marginalized in a society in which Soloway believes white men hold the keys.

Soloway quoted her “feminist superhero,” Audre Lorde: “The master’s tools will never dismantle the master’s house.” Although Lorde’s quote refers specifically to capitalism, Soloway feels it’s instructive in filmmaking. It’s well-established that Hollywood is a boys club. Women accounted for only 7 percent of the directors of the 250 top domestic grossing films in 2016, and in all of the Academy Awards’ 89 years, only four women have been nominated for best director. Only one has won. So according to Soloway, if marginalized people want to infiltrate the clubhouse, they shouldn’t use the tools that built it—their devices need to be tailored to their own experience.

At the beginning of her keynote Soloway said there are many social and cultural reasons why women have had less success behind the camera. During a Q&A following the session she elaborated on the idea, saying that when she’s interviewing for crew positions, women are more likely to admit to inexperience and nervousness. Male candidates, on the other hand, will declare, “I got this,” even with a lack of experience, or, at times, even after Soloway had previously turned them down. Soloway said hiring women in key positions often requires a certain amount of mentorship and grooming.

Similarly, Soloway has had to cut her own path and fully embrace her differences in her directing career, often completely bucking the Hollywood rulebook to make it work for her. For example, Soloway she doesn’t focus all her energy on set lists, budgets, storyboards, shot specifications, or transcripts when she directs. More than anything else, she zeroes in on being present in her own body and making sure everyone else on set—from the actors to the sound guys—are doing the same. That level of consciousness allows the team to create a space that feels authentic. Say they’re filming a Transparent scene in a new set, a kitchen. “You have lived in this house for twenty years,” she prompts to her actors. “Where are the spoons?” Only once she can tell her actors are authentically inhabiting that space does she discreetly tell the director to start rolling. She never shouts “action.”

Another Hollywood standard that Soloway doesn’t particularly buy into is the value of networking. It doesn’t matter who you know, she said, it matters what you make. When Soloway was working as a writer on shows like United States of Tara, Six Feet Under, and How to Make it in America, she repeatedly asked for a shot at directing an episode. She was in the right room and with the right people, but she still couldn’t get what she wanted. It was only after Soloway made her own short film that her directing career started to get some traction.

The director’s job is to say, “I want,” which to Soloway means that the job is closely tied to desire. She believes that we live in a society where women (and persons from other marginalized communities) are routinely shamed for openly expressing their wants, which is one of the many systemic roadblocks in Hollywood. But it’s not all glum. At the end of her presentation, Soloway encouraged her audience to tell the difference between their anxieties and their intuition, and to trust their instincts, a fitting cap to a speech focusing on believing there’s value in your creativity. So whether or not you agree with her ideas about gender fluidity and the patriarchy, a rousing “believe in yourself” message is something everyone can use. 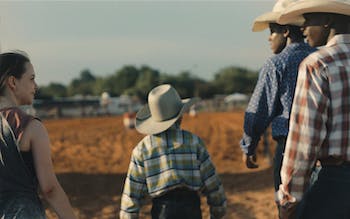