The average price of a Super Bowl ticket right now, according to StubHub, is $5,183. Bring the family to the game or pay cash for a brand-new Nissan Altima? The choice is yours. Plus, if you do want to attend the Super Bowl, and you’re not a Houston native, you’ve also got to pay for lodging that weekend. And boy howdy, is that lodging expensive.

While there are deals to be found—a room at the Super 8 in League City, about 45 minutes from NRG Stadium, runs only $80 per night if you act now!—a place to sleep within ten miles of the event is extremely expensive. For example: a room at the Quality Inn right next to the stadium, which normally runs $62 a night, is currently renting for $999 on travel deals website Kayak. You’re looking at $800 for the Comfort Suites, and $1,520 for the Holiday Inn. The Extended Stay America is a relative bargain at $385 per night—and none of these places represent four-star accommodations. (Those lodgings, for what it’s worth, tend to be less dramatically inflated over their normal rates—the Hilton Westchase, at $479 a night, is only a six-fold increase!)

And pop on over to Airbnb, where ordinary Houstonians are putting the $ in $uper Bowl $unday, and you’ll see that the options—while more varied—are similarly determined to cash in on the needs of people who have thousands of dollars to spend on tickets to the game. But given the sheer volume of options—there are well over three hundred Airbnb listings inside the loop in Houston over Super Bowl weekend—we took it upon ourselves to narrow down the options for visitors seeking different kinds of Super Bowl experiences in Houston. Here are some highlights:

For the brand looking to put up an entire team within a few blocks of the stadium at spare-no-expense rates: 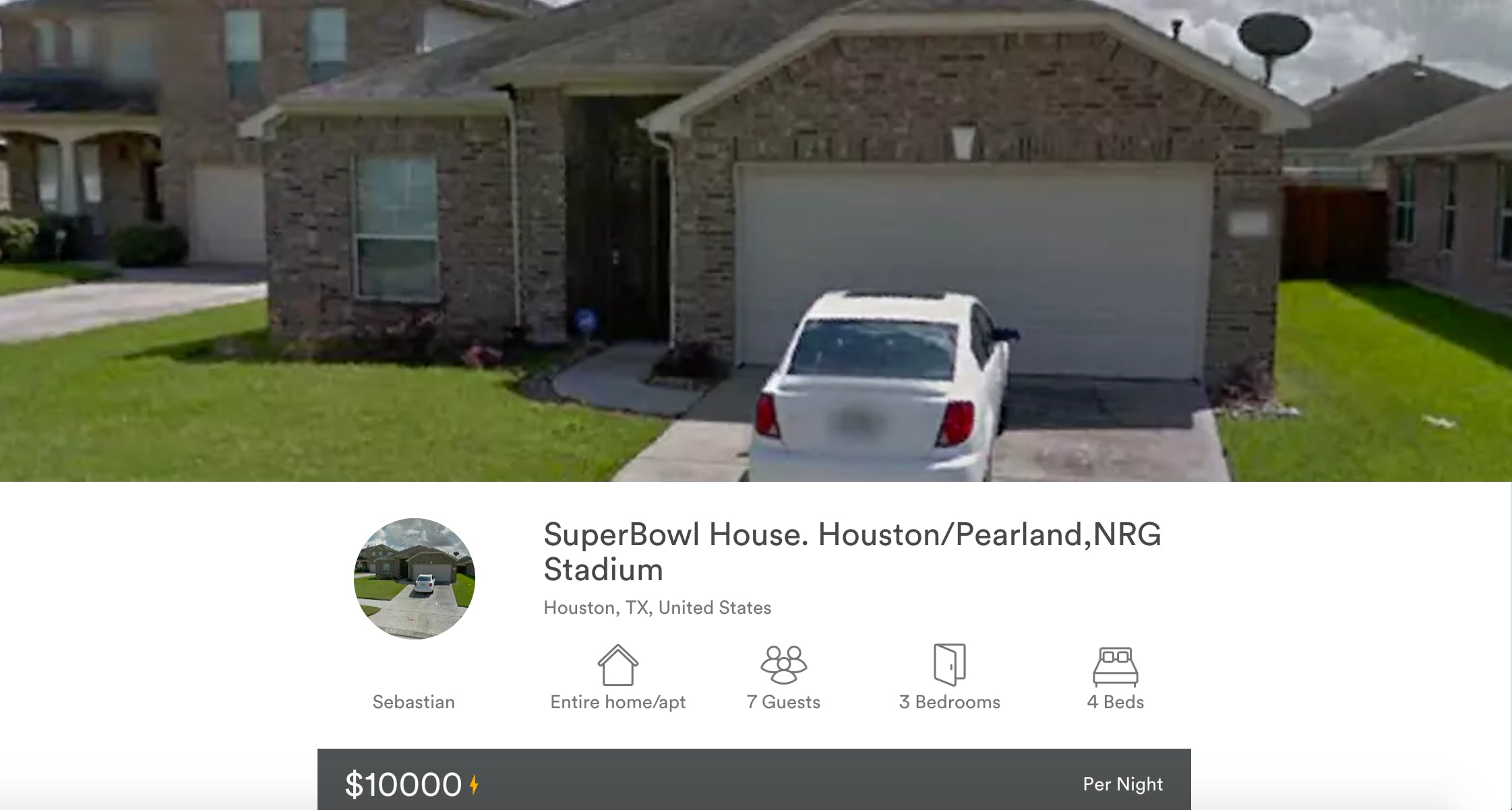 Got $31,800 for three nights in Houston and need to put up seven people? Here’s a three-bedroom house in Pearland (the jewel of the area immediately surrounding NRG Park) for $10,000 a night. The house itself looks, er, fine? Like, there’s nothing wrong with it, seems like a nice enough suburban home—but it’s the kind of place that $31,800 probably ought to get you more like two years of rent, not three nights. We’re going to guess that the person who listed this place probably doesn’t really expect to rent out his house for $10,000 per night over Super Bowl weekend, and instead views listing it at that price like buying a lottery ticket—if it works, yahtzee! If not, well, no great loss. Let’s use this as the top end of the range when exploring the Houston Super Bowl Airbnb market economy, and go from here.

For the person who wants to rent a room at an actual hotel via Airbnb: 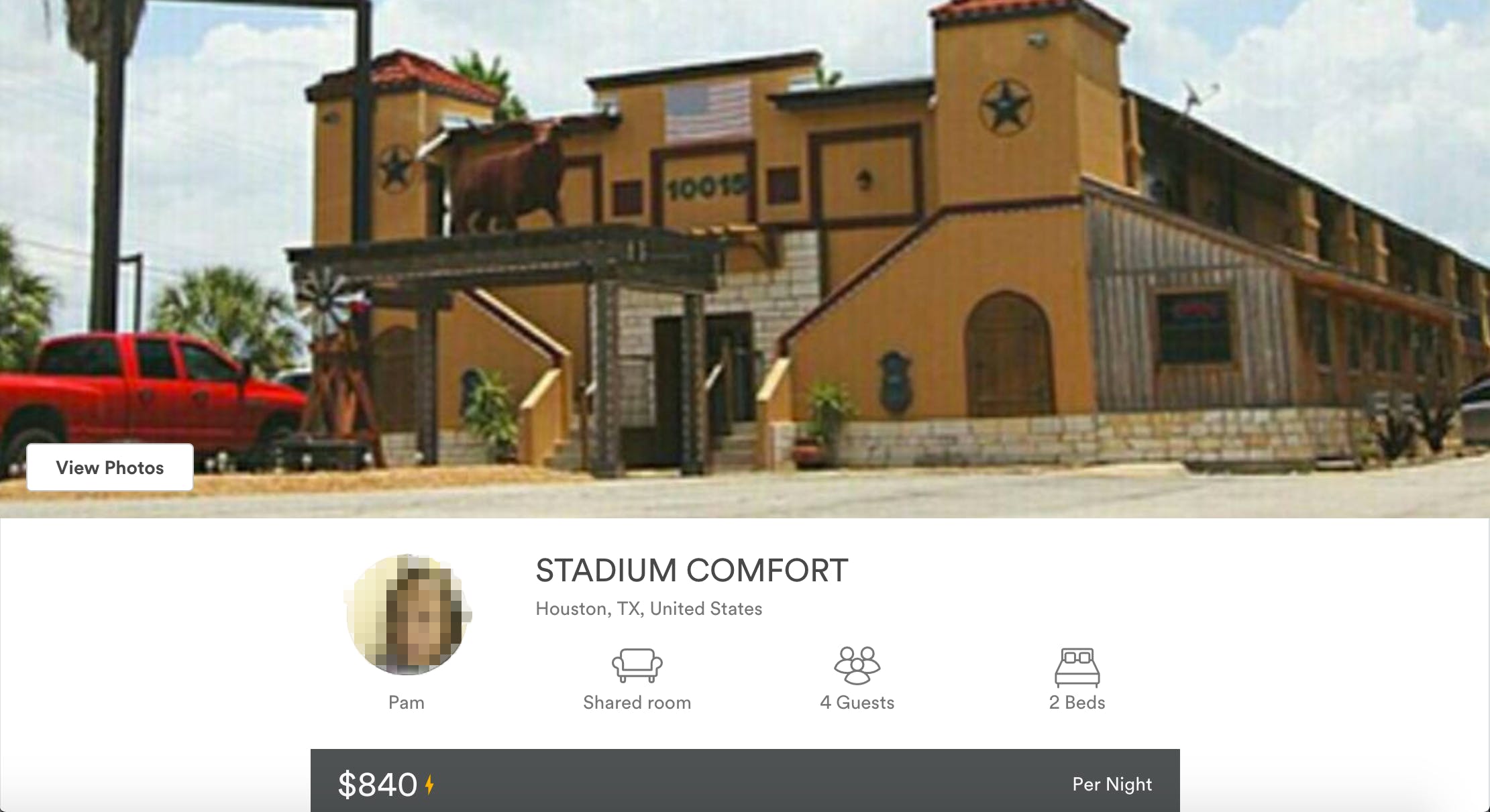 This listing is weird. It’s $840 a night and is listed as a “shared room” (that you will presumably share with Pam). It’s not a space in a private residence, though—it’s a room in the Carefree Inn near the stadium. Its amenities include a hair dryer, a microwave, and a fridge. Also, it’s near the Golden Corral. At the moment, it’s unclear if Pam represents the hotel in an official capacity, or if she’s just an enterprising Houstonian who rented the rooms at their normal price and is hustling to re-sell them via Airbnb at a mark-up. Either way, interested parties should act quickly on this one, as it’s likely to be removed from Airbnb for violating their terms of service.

For somebody who has people to impress:

People go to an event like the Super Bowl for a variety of reasons. Maybe they’re a rabid Atlanta Falcons fan willing to take out a second mortgage in order to see their team compete on the big stage. Maybe they’re idly wealthy and like being in the heart of the culture. Or maybe they’ve got a reason to try to look like a big-shot—say you’re launching a startup and you’re trying to schmooze investors—in which case you can’t just go back to somebody’s very acceptable Pearland suburban home for drinks after the Bruno Mars and DJ Khaled show. You gotta ball. At $2,751 a night, this high-rise right next to the zoo is exactly the sort of place you need if you want to fake it. And if it doesn’t work out, at least you’re by the zoo. Giraffes make most things better.

For anybody who wants to feel like they’re staying with friends who charge them $500 a night to use the spare room:

Some seemingly nice folks have a pretty nice-looking apartment near the stadium. You need a place to sleep, but you also want to hang out with some new people. This is your ideal situation—just pay them $500 per night, and you can not just have a comfy bed with personal touches created by people who enjoy their living space, but you can have people to chat with as you pour yourself a cup of coffee in the morning. Think of it like staying with a friend-of-a-friend, or a cousin you haven’t seen since you were six, who also sees the Super Bowl as an opportunity to make an entire month’s rent in three days off of some desperate friend-in-waiting who needs a place to sleep near the stadium.

For those who just need somewhere cheap to sleep, please:

Sure, you could pay anywhere from $500 to $2,751 for most modern conveniences that you could do without. Alternately, you can stay in this humble, but frankly probably not all that much worse than a lot of the places going for ten times as much, abode just southeast of NRG for $60 a night. Sixty bucks! If you are the sort of person who, say, found your Super Bowl ticket on the street and decided that they’d rather go to the game than try to sell it on the secondary market, but you need to figure out where you’ll sleep, don’t worry: You’ll sleep here.

For anybody with a ton of money to spend and a desire to stay in a colonial mansion like 45 minutes away from the venue for some reason:

It’s unscientific, but this $15,063 per night night colonial mansion in Spring—a suburb just north of Houston, about 35 miles from NRG Stadium—might be the most expensive Houston-area property listed on Airbnb for Super Bowl weekend. Who wants to stay in a colonial mansion 45 minutes from the venue for the cost of a Lexus? Ehhh, hard to say. We bet if this gets rented out, somebody throws a rager, though.

For somebody looking for a reasonable deal amidst all of this ridiculousness:

Here’s the way Airbnb is supposed to work in these moments: people who have space rent it out, but at prices that aren’t completely absurd. People who need space pay a price that’s higher than they might at a time when a major international event isn’t happening, but not so much that they’re going broke. This spot is $300 a night—about a thousand bucks for the weekend—and it sleeps five. So you’re looking at $200 per person for the stay. That’s a reasonable application of supply and demand around the Super Bowl, and ultimately it’s a lot of what’s actually out there. The $10,000 houses are fun to look at, but the win-win scenario of somebody getting to leave town during a traffic-and-headache-inducing event (while cashing in on it) and providing people a place to sleep at a price that isn’t totally gouged is how companies like Airbnb work best.