Last weekend saw the Austin premiere of LBJ, the Rob Reiner-directed biopic that stars a heavily made-up Woody Harrelson playing America’s 36th president. At a Q&A after the screening—held at the LBJ Library, natch—Reiner and Harrelson expressed anxiety about how accurately they portrayed the Johnson City native. Fortunately there was at least one person in the audience who could give them a reality check: Luci Baines Johnson, the president’s daughter, who was sitting in the front row. When Harrelson asked her what she thought, Johnson stood up to address the crowd.

“I knew the man you played tonight,” she said, evidently moved. “I knew him, and I loved him.”

Not every cinematic depiction of LBJ has been as sympathetic as the one by Harrelson, who sensitively lays bare the deep-seated insecurities behind the president’s swaggering public image. Many of the earliest portrayals of Johnson on film bought into the popular caricature of the Texan as a bullying, borderline-racist hayseed hell-bent on getting America into Vietnam. More recently, some historians criticized Ava DuVernay’s 2013 film Selma for portraying Johnson as less than enthusiastic about civil rights—even though English actor Tom Wilkinson’s performance was nuanced enough to accommodate other interpretations.

Reiner’s new film is still in search of a distributor, but as we wait for its general release you can get your LBJ fix with the following films, each of which paints a slightly different portrait of one of America’s most controversial, and complex, presidents. (Caution: contains some salty quotes by a salty man.)

Memorable scene: LBJ welcomes the Mercury 7 astronauts to Houston with a massive BBQ dinner featuring a roping demonstration and a performance by a high school drill team.

Memorable quote: “I, for one, do not intend to go to sleep by the light of a Communist moon.”

Historical detail: A Houston businessman offers each of the astronauts a fully furnished home in the hot new Sharpstown neighborhood. 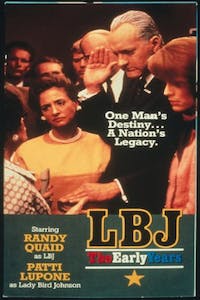 Period: From the 1930s, when LBJ was a congressional staffer, to becoming president in 1963.

Memorable quote: “He’s a good-looking kid. I think he might have a future in politics.” (About then-Senator John F. Kennedy.)

Memorable quote: “Just get me elected. I’ll give you the damn war.” 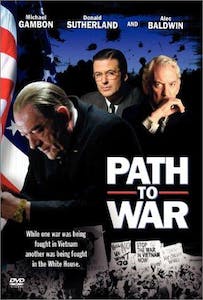 Period: From the 1965 inaugural ball to LBJ’s announcement in 1968 that he wouldn’t run for reelection.

Memorable scene: LBJ threatens to throw speechwriter Richard Goodwin into the army and send him to Vietnam if he leaves the White House to take an academic fellowship.

Makeup: Wig; cotton balls in cheeks; some extra padding around the mid-section.

Period: From Kennedy’s assassination until 1968.

Memorable scene: LBJ sitting on toilet, Basset hounds at his feet, while butler Cecil Gaines (Forest Whittaker) stands attendance outside with a glass of prune juice.

Memorable quote: “The next time there’s a light on in an empty room [in the White House], I will fire every son of a bitch in this house.”

Period: A few months in 1965 during the civil rights protests in Alabama.

Memorable scene: LBJ arguing with George Wallace in the Oval Office over the planned civil rights march from Selma to Montgomery.

Memorable quote: To Wallace: “I’ll be damned if I’m gonna let history put me in the same place as the likes of you.”

Memorable scene: LBJ curled up in bed in pajamas in his Atlantic City hotel during the 1964 Democratic National Convention, refusing to get up to give his acceptance speech.

Memorable quote: “Nothing comes free. Not even good. Especially not good.”

Makeup: Prosthetic nose, ears, and chin. So much makeup work that from certain angles Harrelson looks like Leatherface.

Period: From the late 1950s, when LBJ is Senate Majority Leader, to LBJ’s successful passage of the 1964 Civil Rights Law.

Memorable scene: At Parkland Hospital in Dallas after Kennedy’s assassination, leading his staff in a prayer.

Memorable quote: “Never underestimate the power of a martyr’s cause, or the size of a Texan’s balls.”