Even as Austin’s entertainment districts have taken on different identities (East Austin for hipsters, Rainey Street for college kids, Red River for people who want to hear live music), Sixth Street is still the go-to spot for tourists. Unless, of course, the tourists are in town for the Texas Relays, because last weekend a number of the bars in town opted out.

This isn’t a new trend, but no matter how much people talk about it—and they’ve talked about it a lot over the years—some Sixth Street bars lock their doors and give their staff the weekend off when high school and college track-and-field teams from around the state compete at the Clyde Littlefield Texas Relays. The Relays bring nearly 45,000 people to Austin, many of them African American, and whether by coincidence (as the bars seem to imply) or design (as history suggests), ​Sixth Street establishments are more willing to shut off the profit spigot during this particularly busy weekend than any other comparably crowded event.

This was thrown into sharp focus this past week by UT sociology professor Ben Carrington, who tweeted photos of a number of bars (as well as Palm Door on Sixth, an event venue that’s only open by reservation) that, curiously, were closed while Relays were in town.

Austin struggles to cater to black people the rest of the year—and the history of the city reacting poorly to the sudden influx of young black people looking to have a good time goes back a good ways. In 2009, the now-defunct Highland Mall closed during Relays weekend, leading the local NAACP to declare the mall’s management “incompetent.” Clubs have been closing on Sixth for years—but it’s still jarring to see venues that are normally vibrant shut down when there’s a larger-than-usual number of black people downtown.

@StarvingBeast Nope. Unless "Fear of Black People" is now a health issue in Austin. pic.twitter.com/AOS3tCm8e8

It’s possible that a number of Austin clubs just happened to book private events the same weekend as the Relays, even if, according to Carrington, there didn’t appear to be any outward signs that there were private events happening inside. The owners of Blind Pig, Shakespeare’s Pub, Iron Cactus, and Four Horsemen didn’t respond to requests for comment by Texas Monthly, ​but we did find social media posts from some establishments that explained their closure. 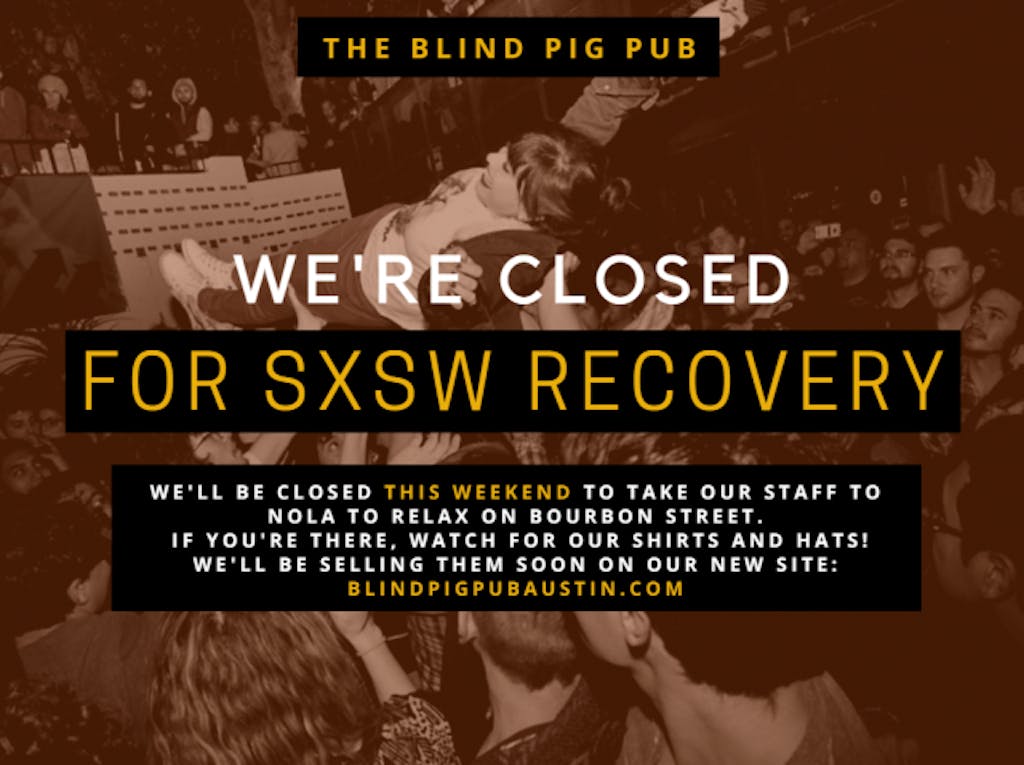 We had a flooring modification scheduled for this past weekend (leveling, refinish, texturing etc.) and had told the staff several weeks ago they would all have that weekend off due to such.  The refinishing was cancelled (by the vendor) just prior to SXSW and we felt it was unfair (with only 7 employees) to change whatever plans the staff had made for their vacations and force them to work.  We are a very busy bar during SXSW, so the break was well needed… also the opportunity to do such is limited throughout the year as we host hundreds of shows many in close succession.

In 2014, Old School Bar & Grill also redid its flooring during Relays weekend. And though “SXSW recovery” is a valid thing, it’s curious that both Blind Pig and Dirty Dog opted to offer that R&R opportunity two weekends after the festival closed.

The Relays crowd, like the SXSW crowd or the Austin City Limits crowd, likes to spend money while they’re in town. The Austin Business Journal noted in 2012 that the event pumps $8 million into the Austin economy, which is no small potatoes for a single weekend. (The Statesman Capitol 10K, which drew more than half as many people that year, generated less than a quarter of the economic impact.) Austin police note that crime numbers are no higher during Relays weekend than any other weekend of the year. In fact, when an APD officer was shot downtown this weekend, Police Chief Art Acevedo was quick to assure the public that the incident had nothing to do with the Relays.

If Sixth Street bar owners want to give employees a post-SXSW break or take the chance to redo their floors, that is their decision. But choosing the same weekend and leaving tons of money on the table year after year makes the bar closures seem like a strange coincidence.