Guy and Susanna Clark were fixtures in my life going back as far as I can remember. Following in the footsteps of Mickey Newbury, the two of them paved the way for much of the Houston country-folk scene’s migration to Nashville, a list that would eventually include Rodney Crowell, Townes Van Zandt, Steve Earle, Richard Dobson, and my parents—John Lomax III and Bidy Taylor.

Some of my earliest memories are the picking parties my parents would throw in our green house on suburban Nashville’s Cadillac Drive. The future legends of Texas songwriting would sit, guitars in their laps, around a coffee table bearing jugs of cheap wine and whiskey. An ashtray sent up Winston and Marlboro smoke signals, EZ Wider and Zig Zag papers were scattered about, shoebox tops were full of stems and seeds, and the whole scene was lit by the flickering glow of an old-fashioned oil-burning lantern. (I think they kept the oil-burning lantern trade in business for a couple of extra years.) It was after one such all-night party that my dad took the now-famous photo of a beyond-pissed Susanna that later graced the cover of Guy’s My Favorite Picture of You. 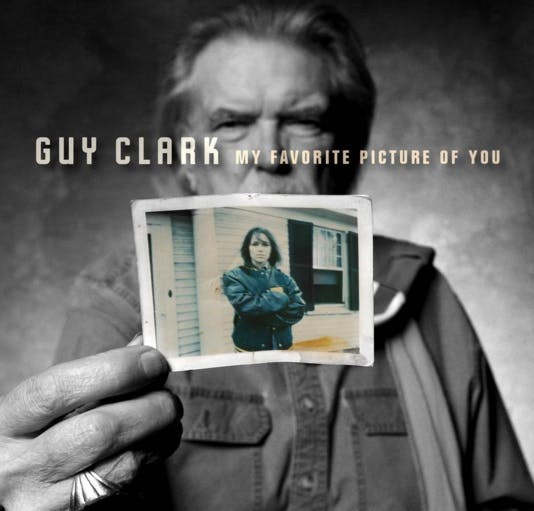 To my pre-school eyes, this is what I saw: There would be Steve in his two-tone, pearl-snap shirts, all nervous energy, pacing a mile a minute and cackling like a madman when he wasn’t behind a guitar. Richard Dobson always reminded me of Pancho Villa, with square-shouldered build and his mustache. All he needed was a sombrero and bandoleros.

Guy and Susanna seemed to have walked in our house straight from a modern-day Western. Guy, to me, was like Black Bart. Gruff, tall, square-jawed, decked out in faded denim from head to scuffed boots, never one to suffer a fool gladly. I always made sure to stay well away from getting under his foot once the jam got underway. Black-haired Susanna was the most beautiful woman I’d ever seen up to that point in my life, and she was always so kind to me, the little waif up way past his bedtime and witnessing adult situations I probably should not have been seeing. Now, I wouldn’t trade those memories for anything.

I saw Guy and Susanna much less often after my parents’ divorce and the sale of the Cadillac house. By that time, Townes had moved to his infamous shack in the country outside Nashville, scene of many a wild party and where, at the age of eight or so, Steve Earle taught me how to shoot a pistol. When the recoil almost took my ear off, Earle laughed and said, “Dirty Harry you ain’t, boy.”

By that time Guy was moving in rarer air. “L.A. Freeway” had been a hit for Jerry Jeff Walker and launched his solo career. I’d run into Guy from time to time at industry functions or at parties at my dad’s house, and I got to spend a weekend with him in about 2003. Wunsche Brothers Saloon in Spring was celebrating an anniversary, and the George Mitchell family hosted a bunch of us at their country compound outside of Magnolia. Shake Russell, JT Van Zandt, Hayes Carll, Guy Clark, Verlon Thompson, and my wife and I spent the weekend there. We were treated to a good old fashioned wee hours guitar pull much like the ones I’d known as a child.

I remember Hayes playing a Blaze Foley tune, and then passing the guitar to Van Zandt, who played another, and then the guitar reached Guy. “I hope y’all aren’t expecting me to play another f—ing Blaze song,” he said. “Not only could that sumbitch not write for s—t, but he was an a—hole to boot.” And on he launched into one of his own tunes.

The man had no ability to bulls—t whatsoever.

These are some of my memories of Guy Clark, but I spoke with some of Clark’s fans and acquaintances to mine their experiences with the legendary songwriter:

“[My favorite Guy song is] ‘Old Friends,’ because I had a hand in the making of it. Susanna and I wrote the chorus, and Guy got involved later and wrote the verses. ‘Desperados Waiting for a Train,’ because of the way it reaches across generations. A story about a kid and an old man, by the end of the song the boy is almost grown. Now we—those of us still around—have become the grandfathers. I wonder if our music sounds quaint and old-fashioned to the people coming up today.

“After we left the radio station one day after a Lone Star Jukebox interview, he and his son Travis were arguing which Antone’s po’boy was the best and that they couldn’t wait to taste that Texas cookin’, per se. They ate as if Antone’s wasn’t ever making another po’ boy.”

“Met Guy in Houston at a little club called World Bait. It was 6 p.m. happy hour. No one knew who he was but I had seen him and Townes play together at Anderson Fair as a kid. I offered him a beer and he said, ‘Got anything stronger?’ We drank whiskey for a couple of hours and he gave me a lift to Rockefellers where he and Townes were playing. He acted unfazed by the whiskey and I asked him before we got out of the car, ‘How do you drink so much before the show and pull it off?’ He said, ‘Wait ’til you see the guy I’m trading songs with, he makes me look straight as a preacher.'”

Back in the early-to-mid 2000s, Clark cut a few TV spots for Taco Cabana. Over the guitar riff from ‘The Randall Knife,’ Clark would expound on the virtues of the 24-hour Tex-Mex chain in what seemed like improvised free-verse poetry. Houston Chronicle journalist Andrew Dansby once asked him how those commercials had been received by his fans:

“I brought up his health, just asking how he was doing. He said, ‘I can’t imagine why people would be interested in that.’ And I offered up some wimpy response like, ‘Well, I think maybe they would be interested…’ He narrowed his eyes, blew a cloud of smoke at me and said, ‘Well, f—k ’em. (Long pause.) I ain’t.’”

“When I interviewed Guy for my book To Live’s To Fly – The Ballad of the Late Great Townes Van Zandt (DaCapo) he asked me to play a few songs for him. He begrudgingly complimented me on one. Saying, ‘Pretty good, but you coulda cut it closer to the bone.’ Whether bolstered by alcohol, or the deep need to free himself from a pain greater than any that I (or we) have known, or just possessing a XXL spirit that thrived on a dare, Guy, through-out his career has proved to be a fearless deep-sea diver of the human spirit. He also has a pretty damn good ear when it comes to picking and singing a simple melody.

Guy always wanted to know what you were made of, what kind of person you were, and he quickly took me to task when I asked for his time to interview him about his old friend Townes Van Zandt. He started drinking pretty hard from the get-go. Smoking one cigarette after the next as he stumbled down memory lane. When I proved to be less than an expert in the canon of Van Zandt-Clark mythology, he drew his fabled Randall knife and called me ‘a little Yankee journalist,’ and assured me that Townes would have skinned me alive.”