“Oh, OK. Great. Does that mean you’re going to be around more? Good. Well then you can buy me LEGOs.”

—Former Dallas Cowboys quarterback Tony Romo’s four-year-old son, Hawkins, in reaction to the news that his father retired from football, according to the Dallas Morning News. 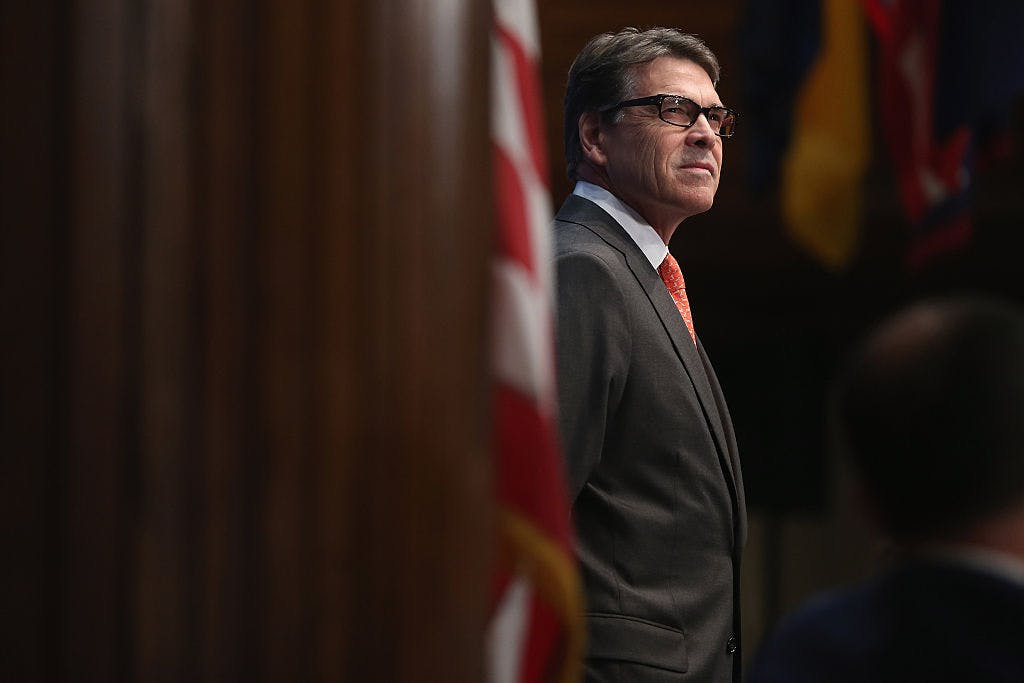 Dance Circle
It’s been a long time since the “oops.” And though it hasn’t been so long since former Texas Governor Rick Perry gave it the old Texas try and laced up his dance shoes as a contestant on Dancing With The Stars, neither of those missteps (or quick-step?) seem to have been enough to keep Perry from being added to one of the most important inner circles in President Donald Trump’s administration. According to a White House memo first reported by Bloomberg on Wednesday, Perry is one of a handful of new faces tabbed to join the National Security Council after chief strategist Stephen Bannon was booted. As secretary of energy, Perry is actually supposed to be a statutory member of the council anyway, so by adding him to the team Trump is simply following a law passed in 2007. But Perry could potentially find himself involved in situations vastly different from anything he experienced in his career as a Texas politician. The council serves as the main policy making body used by the president when deciding issues of national security. The council also has the legal authority to order the killings of suspected terrorists, including American citizens. However qualified Perry may or may not be to have a role in deciding the nation’s most pressing matters of national security, we can only hope that he won’t show up to National Security Council meetings in the shiny, sequined cowboy attire that he broke out for Dancing With The Stars.

Quiet Border
The number of people arrested while crossing over into Texas from Mexico has dropped by two-thirds between January and March, according to the Austin American-Statesman. The number of border arrests in March alone was the lowest mark in seventeen years. It’s unclear exactly what prompted the drop, though some experts believe that President Donald Trump’s crackdown on immigration has something to do with it, something they are calling the “Trump Effect.” Meanwhile, amid what the Houston Chronicle calls a “growing fear of reporting crime,” the Houston Police Department announced on Wednesday that the number of Hispanics who have reported rape and violent crimes is way down since last year. The department found that reports of rape have decreased a whopping 43 percent, while the number of Hispanics reporting violent crimes has fallen 13 percent. “When you see this type of data, and what looks like the beginnings of people not reporting crime, we should all be concerned,” Houston Police Chief Art Acevedo said at a press conference. Acevedo said Hispanics are not reporting crimes because they’re afraid they’ll be deported.

All Night Long
The Texas House will debate its $218 billion budget today. Well, it’ll start today, but will almost certainly stretch into the wee hours of Friday morning. That’s because House members have 400 budget amendments to vote on. That’s a lot of amendments! As the Texas Tribune notes, last year’s legislative session saw about 350 amendments filed to the budget by House members, and it took them eighteen hours to sort that out. Get your popcorn ready. When you get House members cooped up at the Capitol for marathon sessions, some pretty wild stuff is guaranteed to go down. We’ll likely see debates over amendments that address everything from who can use what gender bathroom to abortion rights to border security. One thing we probably won’t see, according to the Dallas Morning News, is any discussion of the state’s spending budget shortfall of between $4 billion and $8 billion.

Reproductive Rally
Supporters of Planned Parenthood gathered on the steps of the Texas Capitol on Wednesday in an effort to push state lawmakers to protect women’s rights and reproductive health. According to the Texas Tribune, there were about 400 people at the rally (the Austin American-Statesman cited Planned Parenthood officials who said more than 1,500 people signed up for the rally), including former state Senator and women’s rights champion Wendy Davis. “They [Republican lawmakers] are hell-bent on holding women back,” Davis told the energetic, pink-clad crowd, according to the Statesman. “Blocking access to Planned Parenthood is dangerous. It is devastating to the women and men who lose that care.” According to KXAN, supporters at the rally came from all over the state, including Dallas, Houston, and as far away as Brownsville. Organizers of the event were expected to meet with lawmakers after the rally, which was held at noon.