Last week, a video captured by a Round Rock High School student went viral. In it, you can see two school police officers confronting a fourteen-year-old boy named Gyasi Hughes. They corner the student, who grabs his backpack as if to leave. As he attempts to move away from the officers, one of them grabs him and put his hands on the boy, who attempts to remove the hand. At that point, the officer grabs him by the throat, turns him around, and slams the boy to the ground.

A statement from Round Rock ISD offers the following explanation:

On Oct. 8, at approximately 2:15 p.m. Round Rock Police School Resource Officers (SROs) were requested by Round Rock High School Administrators to assist with a fight in the cafeteria between two male high school students. The administrator stated she was unable to de-escalate the fight and needed police assistance.

Two Round Rock Police Department SROs responded to break up the fight. One male student refused to comply with an administrator and was attempting to continue to fight the other student. SROs began speaking with the student to calm him down and to de-escalate the situation by walking him into another area of the building. The student refused to calm down and was attempting to get past the SROs to the location of the other student to continue with the altercation. After repeated attempts to calm the non-compliant student, and stop him from going after the other student, officers were forced to detain him for his safety and the safety of others.

Hughes told KXAN that the fight was over a pair of sports goggles that he had loaned to a friend, and that after an assistant principal broke up the fight the officers were called over and told Hughes to walk away.

“As I was walking away the officer was pushing me in the back and I was like, ‘why are you pushing me? I’m not doing anything, I’m walking away like you told me to,” said Gyasi. “Finally we get like in this little corner and he’s (the SRO) sitting there yelling at me saying, ‘You shouldn’t be rude to the lady (assistant principal), don’t talk to her like that,’ I was like, ‘what are you talking about, I’m not doing anything.”

“Finally I asked him (the officer) to leave me alone and that’s the point when he grabbed me and took me down and tried to detain me,” said Gyasi. “I was just very upset, I was amped up over the fight and wasn’t really thinking.”

Watching the video, it doesn’t appear that Hughes is attempting to charge back toward the other student and continue the fight. Although he may have said something rude to the assistant principal or even the police officers, teenage irreverence doesn’t necessarily mean that Hughes represented an active risk to the officers, other students, or himself.

Stories of police using force against citizens—especially young black citizens—very quickly sort people into two camps: Those who argue that the officer’s actions were unquestionably wrong, and those who argue that the citizen on the receiving end of that force brought it on him or herself. The response to this story has been similar. In comment threads across the Internet, the same arguments that have been made in stories involving police and people such as Freddie Gray, Tamir Rice, Sandra Bland, Michael Brown, and Eric Garner were made yet again. Here’s a sample from the comments on KXAN’s initial report on the incident: 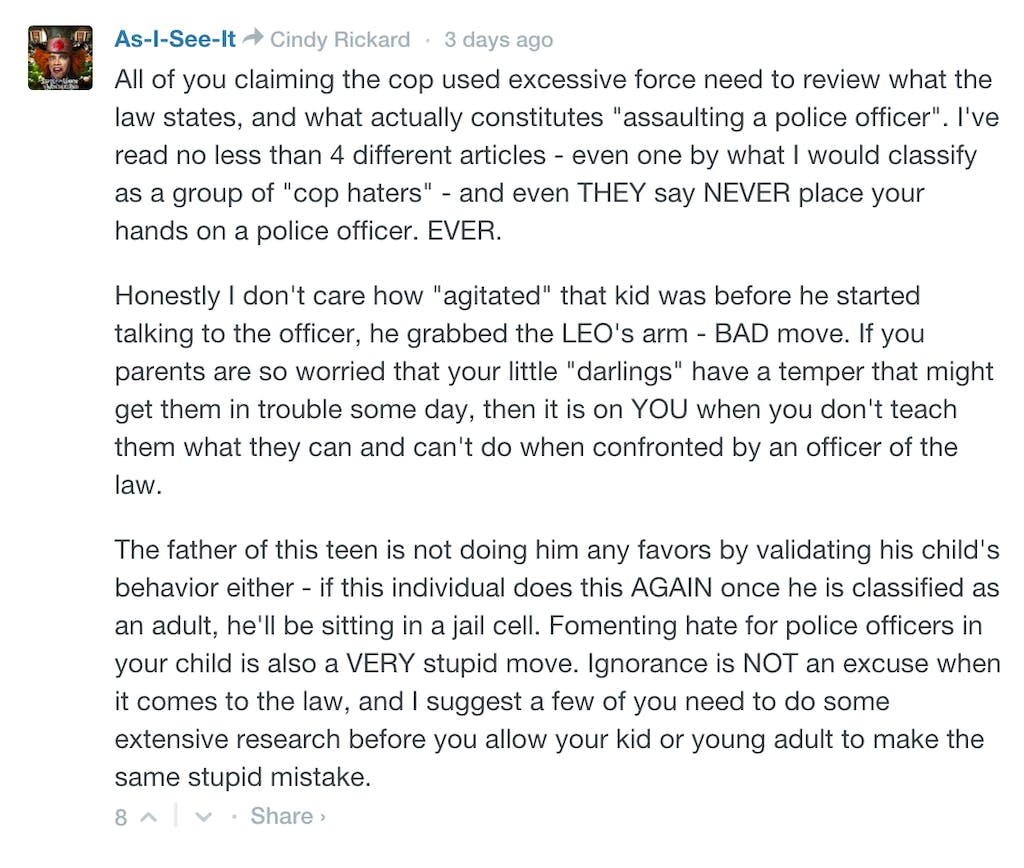 We can argue forever about whether the officer’s actions in the video were justified or not. But ultimately, the question here comes down to something much more fundamental: What are police on school campuses there to accomplish?

If they’re in schools to keep the students safe at all times, then it’s hard to see precisely how Hughes—as one of the students the police ostensibly there to protect—was made safer by being choked and slammed to the ground. But reading the comments, it’s clear that some people believe that officers are there, in part, to teach kids to comply with orders.

Comments in that vein almost universally include sentiments like “do as you are told” or “push a cop, get thrown to the ground” or “the law allows this” or “if he does this as an adult, he’ll be sitting in a jail cell.” It’s the idea that he should have known better.

Outside of a school setting, these questions are a little different. A police officer who stops someone for speeding, or from jaywalking, or from tossing a cigarette butt out their window, is still keeping people safe. But in a school, where police serve as de facto disciplinarians, the idea of “teaching someone a lesson” takes on a different tone.

According to Hughes’ family, he plans on pressing charges for excessive force on the officer in the video. The debate over police and the use of force will continue—and, almost certainly, among predictable lines. But the role of school officers—whether they’re there to protect or to teach—is one that we should consider as the debate continues.