On June 30, Jimmy’s Ice House in the Houston Heights will close after 75 years of operation. Its closure was announced in January, and Jimmy’s was initially scheduled to serve its last beer on March 31. Jimmy’s was spared three extra months and many more beers, but the day has finally come. To give it a proper send off, Texas Monthly decided to spend a recent Sunday hanging out with the regulars at one of the city’s oldest icehouses.

Two minutes after the bar opens for the day, I sit down on a old cowhide-covered bar stool and order a $2 Lone Star longneck from the bartender, Leah Bradley, who has been working here on and off for the past 12 years. Several other patrons are sitting alongside me at the bar, including two women smoking Marlboro 100s. Smoking has been banned at Houston bars since 2006, but Jimmy’s either has an exemption from the law or, more likely, doesn’t care to enforce it.

“It’s a family here,” Bradley tells me as she hands me a beer koozie. “There’s no liquor and no violence.”

I strike up a conversation with Charlie Malone, an eighty-year-old Heights resident with a trucker hat and a full white beard. Malone first came to the bar with his father in 1942, the year it opened; he was five years old. Back then it was a grocery store that also sold ice—hence, icehouse. Malone says he comes here every day. “I got nothing else to do,” he explains.

“What are you drinking?” I ask.

Fifty-year-old Joe Feely, a Marine Corps veteran, is nursing a Red Stripe. He’s been coming to Jimmy’s for two decades, not nearly as long as Malone, but for long enough to have some stake in Jimmy’s. When I tell him I’m spending the day here, he laughs. “A day here is like a year in a Turkish prison where everybody knows your name,” he says.

Feely opens up a tin of Ashton Esquire cigarillos and offers me one. As I smoke it, Eric Quinn, the bar’s manager and part-owner, walks up and introduces himself. He has a white handlebar mustache and sunglasses perched on the brim of his baseball cap. He’s wearing a white Jimmy’s t-shirt. (Slogan: “In the Heights.”)

“I did not want to sell this place, but I got out-voted,” he tells me. “Most people who come here are from the Heights, and there are a lot of people who are gonna be unhappy when we close. We’re hoping for the best.”

The original grocery store was founded by a man named Jimmie Murray, who passed it down to his son Frank and daughter-in-law Marion. (For complicated legal reasons, the spelling changed from Jimmie’s to Jimmy’s at some point.) Frank and Marion sold the bar in 2003, just two years before Frank died. Five years later, as the new owners struggled to make the bar work, Jimmy’s ended up back with Marion, Quinn, and another partner. The 75-year-old bar was bought by Braun Enterprises in January, which plans to renovate and reopen it later this year under a new name.

Customers have been coming up to Quinn asking if they can take home certain pieces of the miscellaneous paraphernalia gracing Jimmy’s walls, but he tells them he’s leaving behind all the signs and tchotchkes for the new owners. “Except for the cat—I shot that one in Llano,” he says, pointing to the stuffed bobcat mounted above one of the vintage arcade games. “I’m keeping that.” 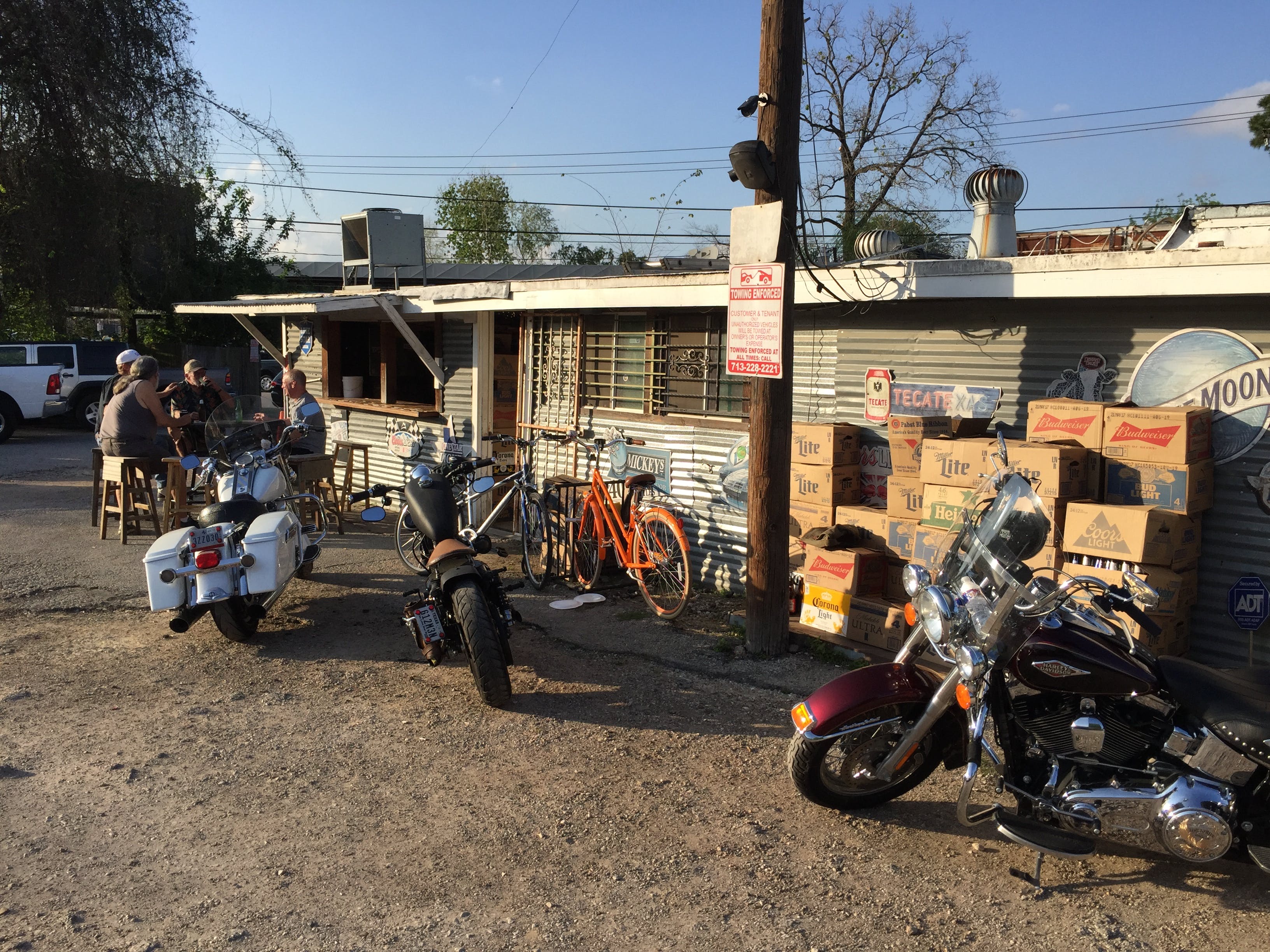 Kevin Harrell sidles up next to me at the bar with a foil-wrapped burrito he brought along with him. He wears a t-shirt emblazoned with the slogan “Peace Through Superior Firepower.” “When I first moved to the Heights, this was the only place to go,” he tells me. “All the other places had a fight every night, they were really rough.”

As he munches his burrito, he ruminates on the icehouse’s appeal. “It gets you up and moving. Like, I came here today just to get out of the house. It’s a social thing—you come here, you see your friends, you watch the sunset.”

Townes van Zandt’s ballad “Pancho and Lefty” comes on the internet jukebox—the un-air-conditioned, cash-only bar’s one concession to modernity—and many of the bar’s patrons begin to sing along.

With the temperature cooling down, I relocate to a picnic table on the back patio, beneath a large outdoor fan. At a nearby table, a man is sitting by himself, drinking a St. Arnold Spring Bock and smoking a joint. A few minutes later, a young couple sits down at a different table with a couple of Peronis. The man takes a glass pipe out of his backpack, packs it with marijuana, and lights up. After taking a hit, he passes it.

Closing time tonight is nearly an hour away, but with icehouse almost empty, Bradley, the bartender, decides to shut down early. She, along with many of the bar’s patrons, will be back on Monday morning at 10 a.m., ready to do it all over again.