They say rainy days and Mondays can get you down, but this is ridiculous.

I woke up about four in the morning on Monday with the rain pelting the roof and lashing the windows. It was a near-continuous son et lumière show of lightning and thunder, as ferocious if not as lethal as a World War I bombardment. By the gray dawn, it was apparent Houston was slogging through yet another historic “rain event,” comparable to both Tropical Storm Allison and last year’s Memorial Day floods.

Schools closed. Metro shut down. Officials told us all to stay home unless we absolutely had to be somewhere else, and to “turn around, don’t drown.” Many people failed to heed that last message, and several paid with their lives. TV news crews brought us Katrina-like footage of people stranded on the top floors of apartment complexes, the salvation of a herd of horses, and a panicked motorist’s rescue from his foundering Prius near downtown. Photographers gave us iconic shots of cockroaches boiling out of storm drains, drowned rats, and a man wading through storm waters brandishing the world’s luckiest armadillo.

Radar maps showed an almighty freight train of livid red and deep purple storms chugging east on the Katy Freeway, one that did not relent until about noon. High tide in the Gulf pushed the bayous backward. Houston Mayor Sylvester Turner expressed concern about the safety of the Addicks and Barker dams west of Houston, both of which have been loosely described as somewhat rickety, and whose failure would bring about one of Houston’s two weather-related doomsday scenarios. (The other being the dirty side of a category five hurricane howling up the Ship Channel.)

Around eight in the morning, I checked up on my own neighborhood.

Houston has just enough topography to get it into trouble. It is not quite pancake flat, like, say, the Panhandle. There is a downhill grade to it, running from the “uplands” in the west to the coast. Fortunately, we live on what passes for high ground in Houston. Not so much our neighbors, a quarter-mile downhill in the Hidden Lake Townhomes, one of Inner Loop’s most enchanting, if flood-prone, areas.

The town homes are situated in a basin on a spit of land behind a levee beneath which flows the channelized White Oak Bayou on their south. On the other side, there’s a swampy, forested, generally stagnant creek. (Hence the “hidden lake.”) It’s beautiful. Wildlife abounds; my daughter and I have fed turtles, ducks and even a brazen raccoon down there over the past few years, and pileated woodpeckers, screech owls, red-tailed hawks, orioles, and osprey prowl the dense canopy overhead. It’s one of the only places in the inner city where you can get a sense of what this part of Texas was like before civilization.  Every now and then up, until last year, my daughter and I would half-heartedly beset my wife with arguments on why we should sell our hilltop abode and move downhill. Fortunately, she is wiser than we are. 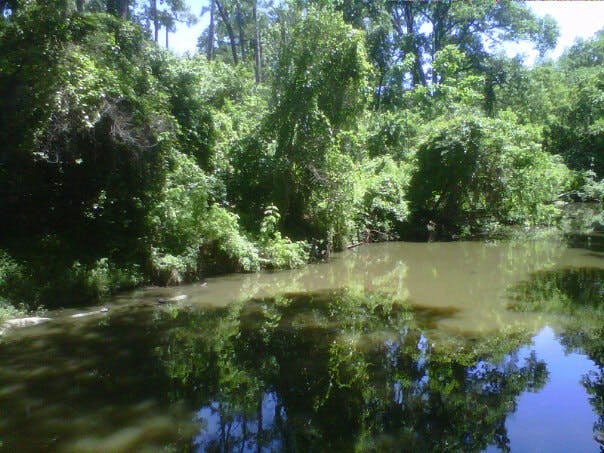 I ventured down there twice yesterday, once about eight in the morning and again about three hours later. It’s a little unnerving. At normal times, White Oak Bayou is a slow trickle sluicing through concrete banks about 40 down the grassy, sloped levee: 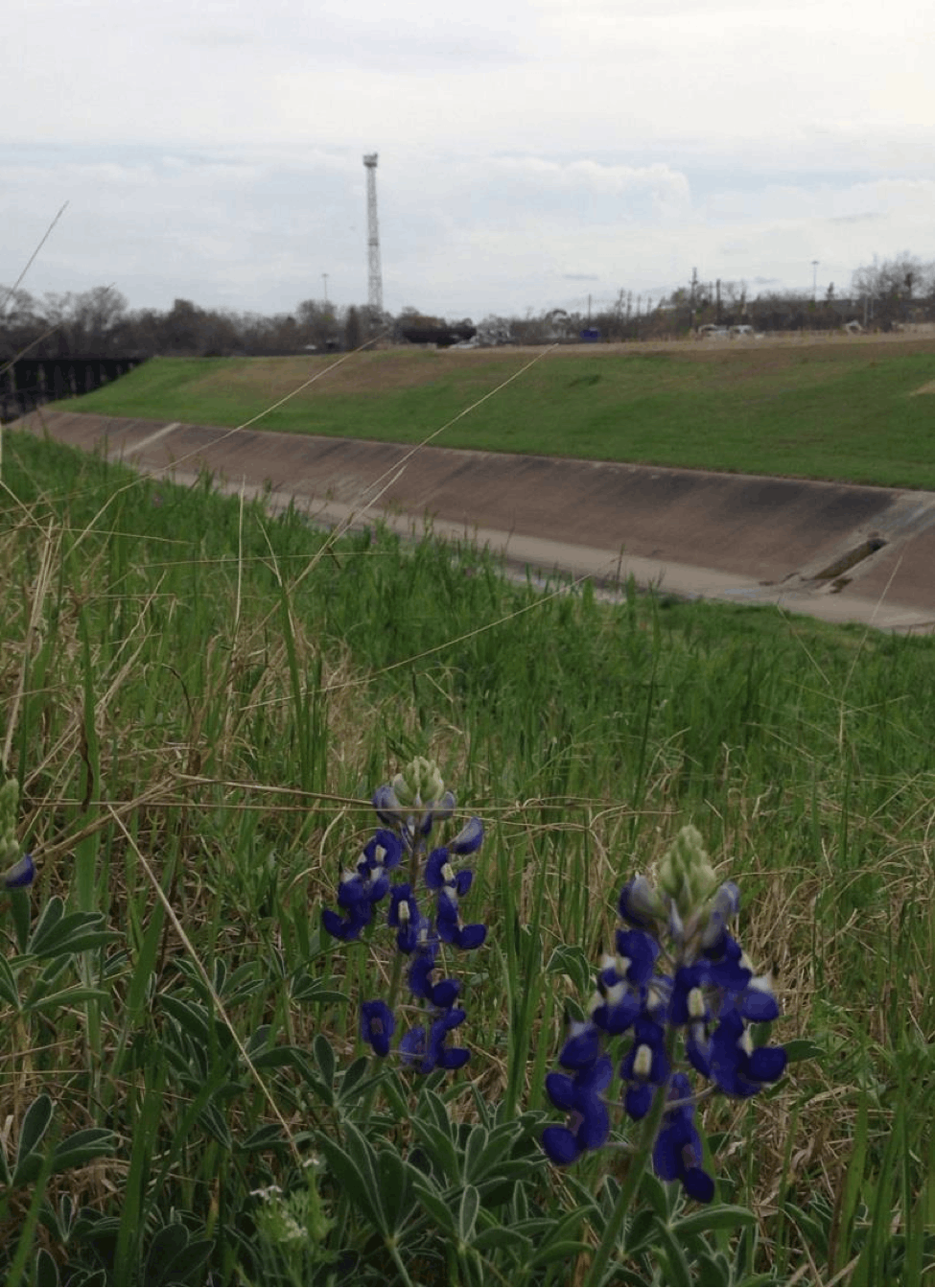 On Monday the White Oak Bayou was raging along.

The bayou itself doesn’t present the greatest threat to Hidden Lake, at least not directly. Instead, it’s the creek on the other side. Along the side of the property, the levee protects the town homes, but about twenty yards beyond the property line, the levee sags a few feet downward. The bayou overtopped the levee there, sending water into the swamp. What’s more, as has happened in Allison and again last year, the creek could not empty into the bayou, sending the swamp waters rising on the north side of the condos.

On my first visit to Hidden Lake on Monday, I spoke to a young couple who were anxiously watching the water’s rapid rise. They were measuring it with a wooden staircase that led down to the lake, and in a matter of minutes, the water had risen up to the second step from the top. (By that point, they and most of the rest of their neighbors had already driven their cars to higher ground.) This couple had purchased this house no more than 48 hours before, they told me, and now they were worried about saving their cats from drowning.

And not two hours later, the first floor of their home had flooded. (By this time they were gone.) I waded through the complex and took a few pics: 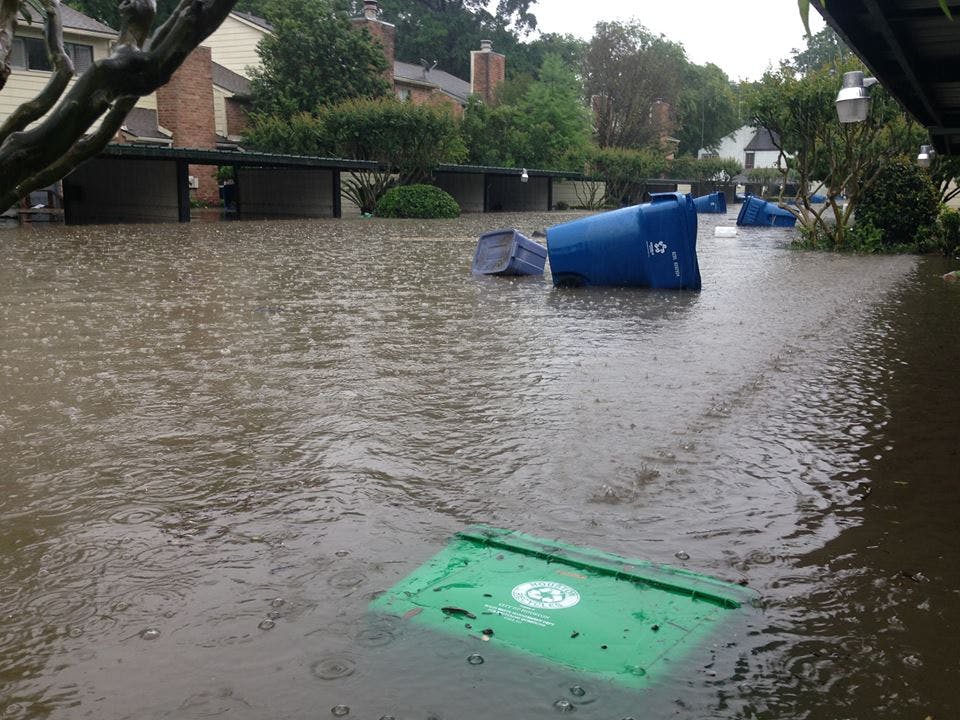 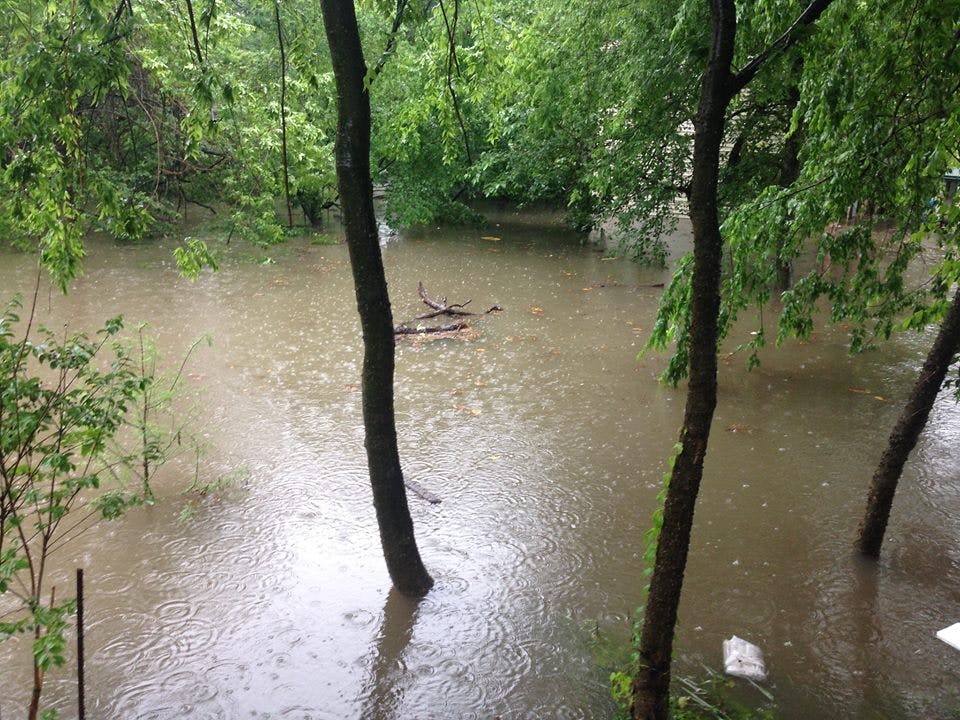 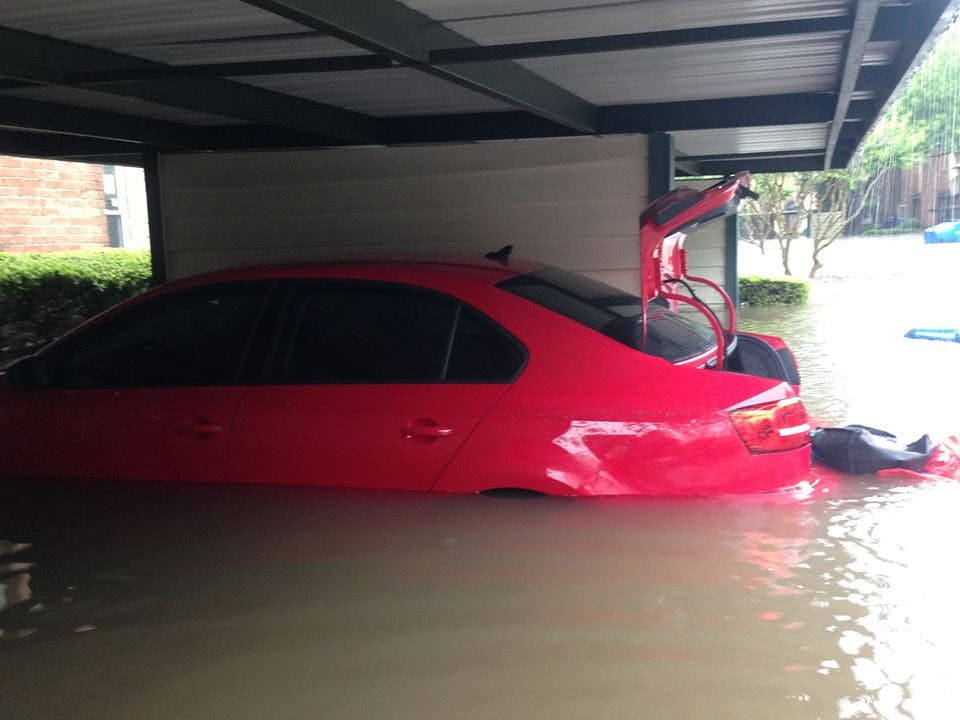 And then I walked the levee, which was so saturated it was bubbling like a soaked sponge under pressure:

And so goes our second hundred-year flood in eleven months, and our third in fifteen years.

Broadway’s Next Great Playwright Is a Texan