Agriculture Commissioner Sid Miller has never been one to mince words, particularly on social media. Who can forget Miller’s reposting of a Facebook meme last year suggesting “the Muslim world” should be nuked? Or that time he said on Facebook that he wanted to “slap” the next person who wished him happy holidays? He’s had a rough ride lately in the non-digital world too, what with the reports from the Houston Chronicle back in March that Miller used taxpayer money to fund a trip to get a pseudoscientific “Jesus shot” and participate in a rodeo in Mississippi (he later paid the state back).

But recently, Miller’s Twitter fingers were too fast and loose. Let’s begin on October 28, when Miller tweeted this reassuring message:

#CrookedHillary needs a dozen people to check her tweets. My thoughts are my own. Healthy as a bull here. #wikileaks pic.twitter.com/1szpSDGFh8

There we have it. Miller is in complete control of his Twitter account, a totally solid, reliable tweeter. No one needs to check his tweets! They are his tweets, his ideas, straight from the brain inside his head, which, now that we think of it, has never actually been seen without the protective coverage of a ten-gallon hat.

Anyway, here he is again at 11:52 the night before Halloween, during the treacherous “night Twitter” time frame, when all computerized hell breaks loose and the ghosts of egg-avatars are unleashed to wreak havoc in the digital world. It is no place for the meek. In this late-night tweet, Miller offered a mild criticism of the Clinton campaign, mocking her social media team for its perceived lack of talent. There are no words to describe a tweet so ironic and prophetic as this one, so we’ll just say this, which is fitting enough considering the platform: hahahaha lololololol

The tweetstorm continued well into the wee hours. Perhaps the timestamp for this tweet can serve as some defense for why Miller was bewildered by what was so clearly a fake account for FBI Director James Comey.

What’s going on here, indeed. His next two tweets both arrived at 12:30 a.m., but then Miller went quiet until noon. Most of his tweets on Halloween afternoon were about poll numbers showing the rise of Republican candidate Donald Trump, but in the evening, Miller began posting again.

It got worse as the night wore on, when “night Twitter” struck again. Shortly after midnight, Miller tweeted praise for Vladimir Putin and then called for the return of Milo Yiannopoulos, whose messages were found so offensive that he managed to get himself banned from Twitter:

One Twitter user, apparently unaware of the ag commissioner’s social media reputation, noticed the tweets and called him out. Miller proudly called himself “deplorable” and proceeded to compliment the man’s sunglasses.

At around two in the morning, Miller began hearing things—a lot of things—a pattern that continued into Tuesday. These “sources” had some interesting things to tell him, mostly about the conspiracy theories du jour:

Word is Comey took a Falcon 900 from DC to Teterboro last night. Hasn't been at HQ all day. Rumors of a meeting with Preet.

I'm hearing Weiner took "great lengths" to hide and protect the backup file. in the case he might need it.

The tweet was soon deleted, but not before Patrick Svitek of the Texas Tribune and other screenshot-savvy media folk were able to save the tweet for all eternity. Miller’s account quickly tweeted out another post, which read that Miller’s account “HAS BEEN HACKED. The disgusting re-tweet has been removed and we have changed all account passwords. Be advised.” Of course, it wasn’t exactly a retweet—some are saying that Miller manually lifted the tweet from another user without giving credit—and soon the tweet informing that us Miller was hacked was deleted too. That’s because there was no hack. According to the Tribune, Miller said the c-word tweet came from an unidentified staffer. “I said, ‘Why don’t y’all just do some retweets?'” Miller told the Tribune. “They didn’t notice it had a derogatory term in it and they tweeted it out.”

Commissioner Miller finds the term vulgar and offensive and apologizes to anyone who may have seen it.

What a wild and whacky run on social media for the ag commissioner. Perhaps the most disturbing part of the spree? He’d been liking his own tweets all along. 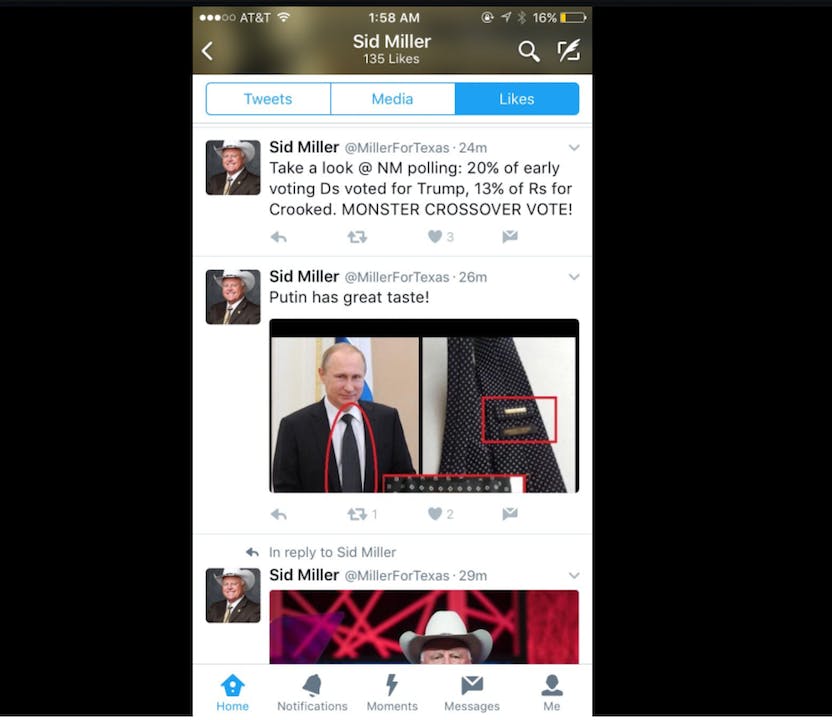