—Graffiti over I-45 in Houston, according to KHOU. Houston’s pre-Super Bowl craze knows no bounds, as a pigskin-headed vandal made some rewrites to Houston’s iconic “Be Someone” graffiti on an overpass above a stretch of highway. 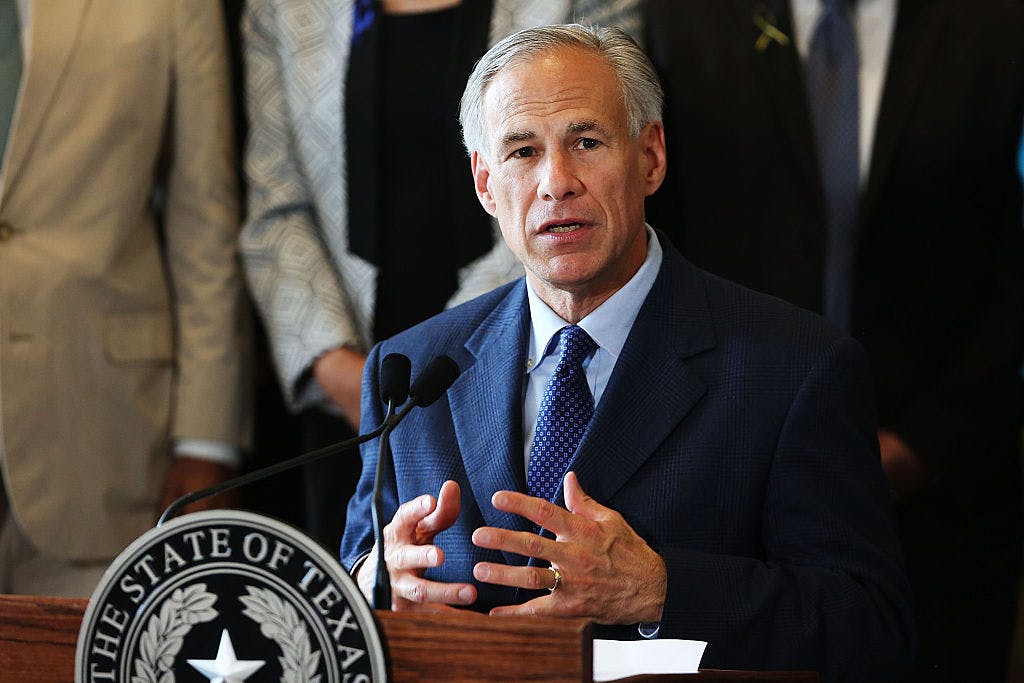 Talking Texas
Governor Greg Abbott gave his state of the state speech on Tuesday, offering a comprehensive agenda for the Eighty-fifth Legislature, and there are a few important takeaways (you can read the full transcript here). First, Abbott announced that he has imposed a hiring freeze on state employees until September, which he said will open up about $200 million in the state’s budget. According to the Austin American-Statesman, the hiring freeze won’t affect positions that directly impact public safety, including Child Protective Services. The freeze applies to “agencies under the direction of the governor,” including state universities, though, according to the Texas Tribune, agencies can get a waiver from the governor’s office “on a case-by-case basis,” and positions funded by money that wasn’t appropriated by the state are exempt, so universities will still be able to do a little bit of hiring with money they get from other sources. Abbott’s white whale—banning sanctuary cities—was one of the emergency priorities listed in Tuesday’s speech. “This is the session we will ban sanctuary cities,” Abbott said. “Some law enforcement officials in Texas are openly refusing to enforce existing law. That is unacceptable. Elected officials don’t get to pick and choose which laws they obey.” Abbott didn’t name any names, but it was basically a big subtweet aimed at Travis County Sheriff Sally Hernandez, who has been squaring off against the governor over her decision not to turn some undocumented immigrants in her jails over to federal immigration authorities. As the Dallas Morning News notes, attempts to ban sanctuary cities have fallen flat in the Lege again and again over the years, but there are a whole bunch of new bills that were proposed this year that call for punishing local governments who follow sanctuary practices. Along with the sanctuary ban, Abbott also declared three other emergency priorities: fixing the state’s Child Protective Services program, reforming ethics laws, and trying to amend the constitution to weaken the federal government.

Show Of Support
Tuesday was Texas Muslim Day at the Capitol, and thousands of Texans showed up to a rally supporting Muslims, according to the Austin American-Statesman. The rally came at a tense time for Muslims in the U.S., just a few days after President Donald Trump issued an executive order barring entry to the U.S. from seven majority-Muslim countries. The majority of the crowd at the Capitol was were not Muslims, which was a pleasant sight for organizers of the rally. “In all the years we have been doing this, we have never seen a sea of supporters like we do today,” Alia Salem, executive director for the Fort Worth chapter of the event’s lead organizer, the Council on American-Islamic Relations, said, according to the Statesman. In one particularly touching display, demonstrators at one point formed a human shield around the other participants, protecting the core of the rally from a tiny contingent of counter-protesters, according to the Texas Tribune.

Texas Two-Step
President Donald Trump announced his nomination for the open U.S. Supreme Court justice slot on Tuesday night, and he didn’t pick a Texan. Texas Supreme Court Justice Don Willett was on Trump’s shortlist, and there has long been chatter that Senator Ted Cruz was a possibility to be nominated, too. But Trump instead went with Neil Gorsuch, a conservative who was appointed to the 10th U.S. Circuit Court of Appeals in 2006 by George W. Bush. As the Texas Tribune notes, Willett never really said if he’d want the nomination, anyway. “The president made a magnificent choice,” Willett said in an email to the Tribune after Trump announced his nomination. “Judge Gorsuch is a superb jurist with an unswerving devotion to the Constitution and the Rule of Law.” Cruz also praised the decision. “I couldn’t be happier with his selection,” Cruz said in a written statement, according to the Dallas Morning News.

New Hope
The mayor of New Hope (population: 670) is believed to be the first openly transgender public officeholder in Texas. Mayor Jess Herbst came out as trans in an open letter to her constituents (you can read it at New Hope’s website here) of the tiny Collin County town, outside of McKinney, according to the Texas Observer. “As your Mayor I must tell you about something that has been with me since my earliest memories,” Herbst wrote in the letter. “I am Transgender. Two years ago, with the support of my wife, daughters and son-in-law, I began Hormone Replacement Therapy (HRT). At the time, I did not imagine I would hold the Mayors [sic] position, but here I am.” Herbst was elected to the Town Council as an alderman and was appointed mayor in May 2016 after the elected mayor died. As the Observer notes, she’s coming out at a pretty fraught time for transgender folks in Texas, what with Lieutenant Dan Patrick’s bathroom bill crusade. Herbst also has a blog, jessherbst.com, in which she documents what her life is like as a transgender person.

Is the Mexican city of Reynosa boycotting the cross-border city of McAllen? McAllen Monitor