“I’m just sick to my stomach. Not basically because the Republicans won or anything, but the disgusting tenor and tone and all of the comments that have been xenophobic, homophobic, racist, misogynistic. I live in that country where half of the people ignored all of that to elect someone. That’s the scariest part of the whole thing to me. It’s got nothing to do with the environment and Obamacare, and all of the other stuff. We live in a country that ignored all of those values that we would hold our kids accountable for. They’d be grounded for years if they acted and said the things that have been said in that campaign by Donald Trump.”

—Gregg Popovich to reporters on Friday, according to the San Antonio Express-News. The San Antonio Spurs’ head coach went multiple-flame-emoji on president-elect Donald Trump. The transcription of his diatribe—available in entirety over at the Express-News—is worth a read. 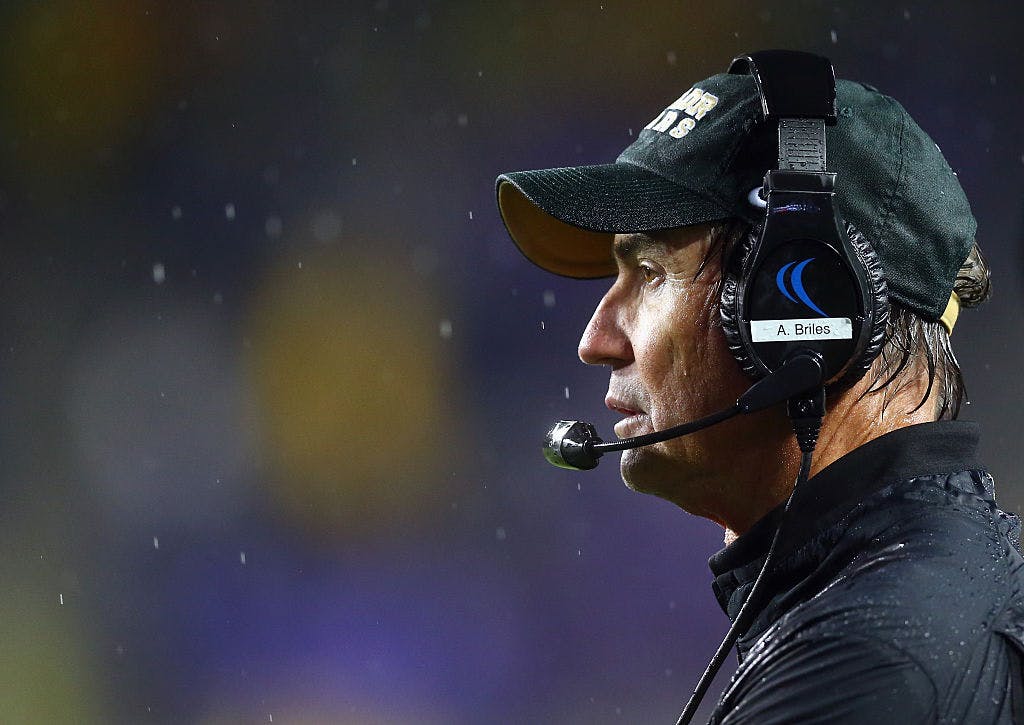 What They Knew
Almost five months after the firing of former Baylor head football coach Art Briles and the resignation of then-athletic director Ian McCaw, the university now says that both knew about a rape allegation made against five football players but failed to report it, according to the Dallas Morning News. Baylor divulged the details in a statement released on Friday. According to the statement, a female student-athlete at Baylor told her coach in 2013 that five football players sexually assaulted her the year before, which her coach then reported to the athletic director, head football coach, and sports administrator of her team. “Over the course of the past year,” the statement said, “the student-athlete’s head coach, his sports administrator, the head football coach, and the Athletic Director have each independently confirmed to the University—in some instances, on multiple occasions—that they did not report this sexual assault allegation to Judicial Affairs in 2013.” As the Morning News notes, federal Title IX rules require that such allegations, when reported, should be passed along to the judicial affairs office. Briles’s attorney denied that the coach failed to report the allegation, telling the Morning News that “everything Baylor is saying is false,” and that the university is “up to the same underhanded and dirty tricks.” Earlier this month, a cohort of Briles’s former assistant coaches issued a statement of their own, claiming the female athlete’s coach had told Briles that the rape allegation had already been reported to the judicial affairs office, but Baylor officials confirmed to the Morning News that the allegation was never reported.

QB Controversy
In most cases having two of the same good thing is, well, a really good thing. But in the case of the Dallas Cowboys’ starting quarterback situation, having two good signal callers available may cause some problems—at least, that’s how some members of the Cowboys’ organization feel about the impending return of veteran QB Tony Romo, who’s been on the shelf since the preseason nursing a shoulder injury. Romo’s return could bump rookie Dak Prescott back to the bench, even though Prescott has played very well and the Cowboys are 8-1. Members of the Cowboys organization told ESPN’s Ed Werder that they’re less concerned about the reaction of Prescott himself than the rest of the squad should he get benched. “It’s a close-knit group, and a lot of that is coming from the quarterback position,” an anonymous Cowboys source told ESPN. “Do you mess with that? I don’t know. There’s a concern there.” In fact, there is so much concern in the Cowboys organization that they have apparently dubbed Romo’s return “The Big Dilemma.”

Border Boost
About 150 U.S. Border Patrol agents are heading to South Texas in an attempt to address a surge in immigrants crossing the border illegally, according to the Associated Press. The agents will be reassigned to the Rio Grande Valley from Arizona, California, and other places. The surge in undocumented immigrants is apparently pushing border cities such as McAllen to the breaking point. According to the AP, city officials in McAllen said earlier this month that they’re struggling to provide services to undocumented immigrants making their way across the border. one church in McAllen offered assistance to more than 5,600 immigrants in October, its busiest month in two years, and the city has apparently spent nearly $1 million in the past two years on showers, tents, and other needs for the wave of border crossers. In a statement, border patrol said the reassigned agents will “assist with screening and processing immigrants taken into custody along the border.”

Mother Knows Best?
Two moms in the Houston area are under fire for two completely separate—and utterly bizarre—incidents that may have put their own children at risk. First, there was the Facebook video of a Houston mom supposedly kicking her seven-year-old son out of the house for voting for Donald Trump in his school’s mock election. “Since you voted for Donald Trump, you can get your shit and get out,” the mother says at the beginning of the footage. When the kid starts to cry, his mom just says, “Uh-uh, the suitcase is packed by the door,” then gives him a sign saying “My mom kicked me out because I voted for Donald Trump.” Just some tough love? Maybe a little too tough—according to KHOU, the Fort Bend County Sheriff’s Office and Child Protective Services are investigating the incident. Also in Houston, a mother is in hot water after police knocked on her door and found three tiger cubs and a skunk roaming around the house as the woman’s fourteen-year-old daughter petted them, according to the Houston Chronicle. The mom also apparently had a “large male tiger,” several admittedly “vicious” monkeys, a fox, and a cougar. She’s now facing a felony charge for endangering a child.