“Leslie’s passing proves that evil does in fact die and hopefully marks a time of healing and safety for all.”

—An obituary for Leslie Ray Charping, according to KTRK. The 75-year-old Galveston man passed away last month after a battle with cancer, and he apparently won’t be missed—at least not by the author of his obit, who wrote that Charping’s “life served no obvious purpose” and that he had “a complete commitment to drinking, drugs, womanizing and being generally offensive.” There was no funeral service. 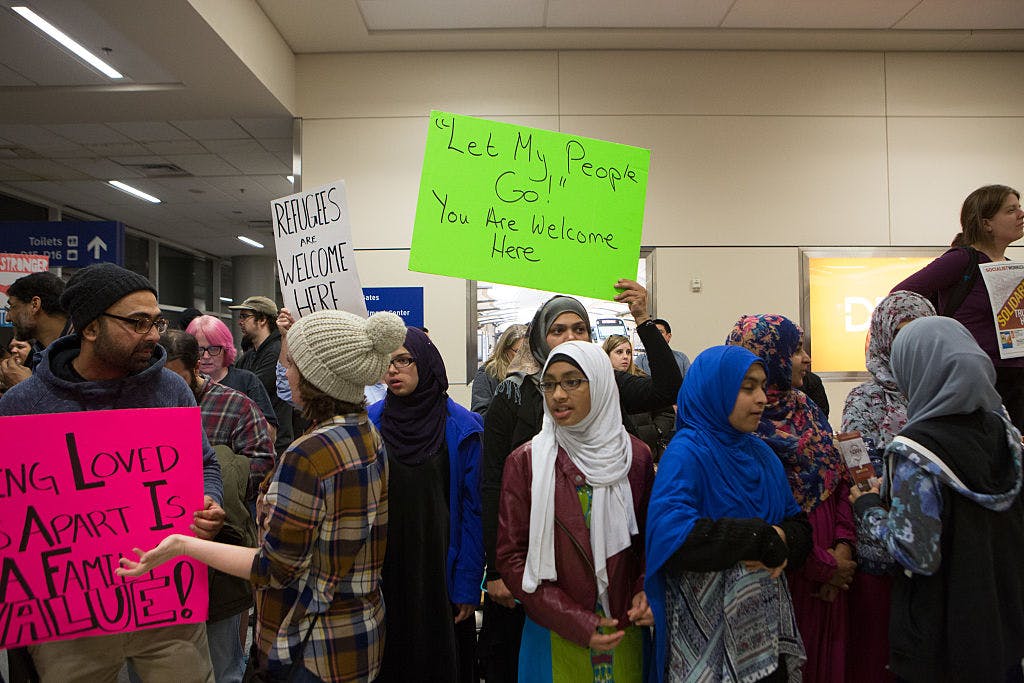 No Ban
A federal appellate court ruled unanimously on Thursday to keep in place a lower court’s decision blocking President Donald Trump’s executive order banning refugees and people from seven majority-Muslim countries from entering the United States. This loss was a major blow-out, according to the New York Times. The judges ruled 3-0 against reinstating the travel ban and said the government had “no evidence” that anyone from any of the seven countries mentioned in the ban had perpetrated a terrorist attack in the U.S. The judges also firmly upheld the power of the judicial branch within our system of checks and balances in the face of criticism from Trump. “It is beyond question,” the decision says, “that the federal judiciary retains the authority to adjudicate constitutional challenges to executive action.” You can read their 29-page decision here. This is, of course, a pretty big deal all across the country, but it’s particularly impactful here in Texas, which has one of the nation’s largest Muslim populations and is a popular place for refugee resettlements. The implementation of the executive order was disorganized and chaotic, causing hundreds of people, including U.S. citizens and legal green card holders, to be detained in airports across the country—including Dallas and Houston—and large protests broke out to demand the release of those who were detained. The ban also separated Texas families, leaving loved ones stranded in places like Syria and Iraq. It’s possible this case could be sent to the U.S. Supreme Court, but that will take a while, and if it does end up before SCOTUS, it’s unlikely it would end in a result favorable to the White House, given the court’s current eight-member status. A tie would uphold the rulings blocking the ban. Trump wasn’t happy. “SEE YOU IN COURT, THE SECURITY OF OUR NATION IS AT STAKE!” he wrote on Twitter.

ICE Cold
U.S. Department of Homeland Security Immigration and Customs Enforcement agents swept up at least five allegedly undocumented people in Austin in what immigration advocacy groups are calling unprecedented raids, possibly the result of President Donald Trump’s policy promises and recent executive orders targeting immigrants. “I’ve never heard of five people getting picked up in one day,” one organizer with Grassroots Leadership, an Austin-based non-profit focusing on abolishing private prisons and detention centers, told the Texas Observer. Rumors had swirled for a few days that ICE was planning widespread raids in Central Texas (ICE consistently denies that such “raids” are anything other than routine enforcement actions), and larger roundups in southern California and Arizona have already sparked major protests. About two dozen protesters rallied in downtown Austin on Thursday night in support of a mother who said her husband will likely be deported after he was detained during a traffic stop in southeast Austin, according to the Austin American-Statesman.

Rising Starr
Former Baylor president Ken Starr’s exit from the university was hardly smooth, but that hasn’t precluded him from being considered for a job in President Donald Trump’s administration. Starr, who left Baylor amid the university’s widespread sexual assault scandal and faced criticism for mishandling the crisis, is reportedly among the candidates who have been vetted for the job of “ambassador-at-large for international religious freedom,” according to Foreign Policy magazine. “It’s my understanding that it’s his job if he wants it,” an anonymous source familiar with the process told Foreign Policy. If he lands it, Starr’s State Department role would involve promoting freedom of religion and monitoring religious persecution around the globe, both issues that are expected to factor heavily into the Trump administration’s playbook during his term. It seems like a gig Starr would for sure be interested in, though he hasn’t publicly commented about it. According to the Dallas Morning News, Starr once said that the issue of religious liberty was one of his “abiding passions.”

Free Piggly Wiggly
A lost pig who wandered into the parking lot of a Stripes gas station in Corpus Christi earlier this week was sent to a pig rescue center in Houston on Thursday, according to the Corpus Christi Caller-Times. It marks a happy ending to the pig’s odyssey, which landed her at the gas station in the early morning hours on Wednesday, leaving the Stripes employees rather bewildered. Here’s how that phone conversation with animal control went, according to KRIS-TV: “I’ve got a really strange thing going on here,” the caller said. “I have a pig that won’t leave my parking lot.” A very relatable problem, for sure. “A pig?” the dispatcher asked. “A pig,” the caller confirmed. “Yes, ma’am. Bacon on the hoof.” It took five cops and one animal control officer to round her up. Animal Care Services named the little one Piggly Wiggly, a perfectly appropriate, if cliché, moniker. According to the Caller-Times, Piggly Wiggly was “friendly, sleepy, and hungry” when animal control arrived, but she was in rough shape, suffering from what appeared to be sunburn, fleas, and bites from other animals. They think she was someone’s pet, and it’s unclear how she ended up in the Stripes parking lot. Piggly Wiggly should be well-cared for at her new home, Houston Mini Pig Rescue.

Justice is blind, and so is this successful Waco attorney Waco Tribune-Herald