“We’re still keeping up a regular pace. We’re not selling more clown costumes than we have in the past. But we have noticed people explaining why they’re buying one.”

—Mary Frerich, manager of Wally’s Party Factory in Wichita Falls, to the Wichita Falls Times Record News. Gone are the simple days when one could purchase a clown costume without feeling judged. Clown costume sales in Wichita Falls stores seem to be doing all right considering the national “crazy clown” hysteria, but Frerich said her store took down its window display featuring clowns because of a potential backlash. Meanwhile, Spirit Halloween’s Wichita Falls store was apparently barred from commenting to the Record News after the national chain “made clear to its retailers that clowns were not to be discussed with the media.” 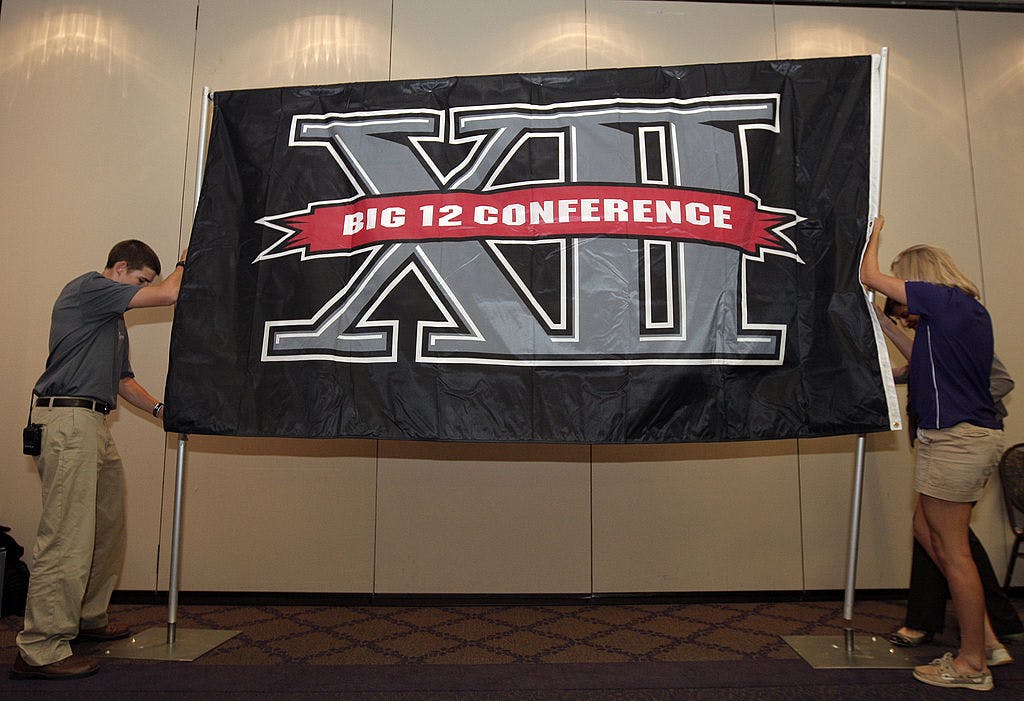 Big Day
Big 12 Conference officials are in Dallas to decide whether to expand the conference or just keep it at its current count of ten teams, according to the Dallas Morning News. We should officially know what went down during the meetings by 5:30 Monday afternoon, when Big 12 Commissioner Bob Bowlsby is expected to hold a press conference. But reports ahead of Monday point toward the conference sitting pat rather than extending an invite to any of the schools hoping to hop on board, including the University of Houston, which was thought to be a lock to get a Big 12 invite. According to Sports Illustrated, “interviews with sources from the Big 12, the television industry and schools involved in the expansion process indicate the league’s most likely outcome is not expanding.” It seems like big television networks are the primary players behind the Big 12’s potential decision. Per Sports Illustrated, ESPN and FOX are willing pay for the conference not to expand, dishing out more than enough cash to cover a $25 million contract clause that would have gone to the Big 12 for each school they decided to add. “If they put more money up and bought out that pro rata clause, we’ll likely keep ourselves at ten,” a high-ranking Big 12 source told Sports Illustrated. Whatever happens, there are big implications for Texas schools. Houston has been a clear front-runner for expansion, and Rice and Southern Methodist are also being considered as possible additions, though they were always long shots. Houston football coach Tom Herman has a lot at stake, too, since he’d get a $5 million bonus should the school get into a Power Five conference. The University of Texas at Austin is highly invested in expansion, having publicly backed Houston’s candidacy while angling to expand its own campus in UH’s backyard. And Governor Greg Abbott and Lieutenant Governor Dan Patrick both came out in support of Houston to join the conference back in July. Since the Big 12 is a bit of a mess right now, literally anything can happen, but we’ll likely have an answer later Monday.

Texas Cash
Donald Trump keeps coming back to Texas for rallies and fundraisers, and it makes sense considering the Lone Star State has been a bit of a cash cow for the Republican presidential candidate. According to the Austin American-Statesman, donations from Texans accounted for 35 percent of all contributions to the Trump Victory fund in the second quarter of the year, and just under 14 percent for the third quarter. The Trump Victory fund reeled in $8.5 million from Texas donors in July, August, and September, the Statesman gathered from Federal Election Commission filings over the weekend. And through the end of August, Texans have chipped in $7 million directly to The Donald, more than he received from any other state. Houston Texans owner Bob McNair and his wife each contributed $449,000 to the Trump Victory committee, while Julianna Holt, who co-owns the Spurs, gave the same amount. As the Statesman notes, a lot of Trump’s Texas money came from those who made their fortunes in oil and gas, though according to the Houston Chronicle, Houston’s reliably conservative energy executives aren’t so hot on Trump.

Awkward Party
Baylor’s homecoming was held over the weekend, and though the weather made a great day for a parade, Baylor’s continuing problems stemming from its sexual assault scandal dampened the mood a bit. Writes the Waco Tribune-Herald: “Though the celebrations did not seem at all restrained, it was impossible to ignore clouds of a different sort.” Baylor recently lost its Title IX coordinator, who said she quit because of “resistance” from the university, and last week the school was hit by a fourth Title IX lawsuit from a woman alleging a former football player sexually assaulted her and that the school didn’t do anything about it. According to the Houston Chronicle, one float in the homecoming parade was designed to take a satirical jab at Baylor’s myriad problems, with the NoZe Brotherhood dragging a rug behind a pick-up truck while group members marched equipped with brooms. The message, apparently, was that Baylor had swept sexual assault accusations under the rug.

Mad Hatters
San Antonio police officers made headlines after donning “Make America Great Again” hats lats week while escorting Republican presidential nominee Donald Trump to and from a fundraising event in San Antonio, and now they’re in hot water for their headwear. According to the San Antonio Express-News, Police Chief William McManus disciplined 23 officers, including six supervisors, for violating a city policy that prohibits city employees from wearing politically-charged attire while on the job. “Six supervisors will be issued a written reprimand, and 17 officers will be provided written counseling,” McManus said in the statement. “In addition, as part of the corrective action, the officers involved will receive training this month that will focus on the importance of impartiality and fairness in performance of official duties.” San Antonio Mayor Ivy Taylor wrote on Facebook that she was “deeply disappointed” by the officers’ partisan fashion statement, and the city attorney requested that the Trump campaign remove a video from its social media accounts that showed the officers in their hats and captured a short, “friendly exchange” between the cops and the candidate.

Someone stole two horses from a pasture in Henderson KYTX