“It was always hanging over me somewhere in the distance but it all came and hit me in the face that day.”

—Resa Woodward to WFAA. Woodward shared her story with WFAA after she was fired from her teaching position at a Dallas ISD middle school, she claims because someone submitted an anonymous tip to the district revealing her prior history as a pornographic actor (she said she was coerced into the illicit business by her former husband). 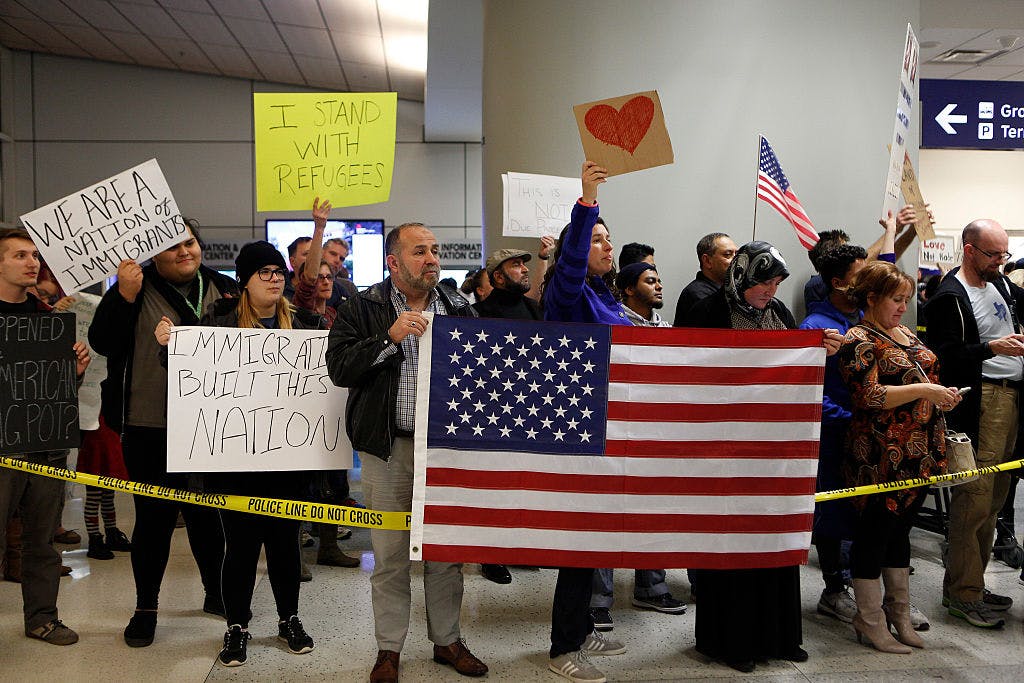 Legal Showdown
State and federal lawyers will present oral arguments in a San Francisco federal appellate court today, putting the fate of President Donald Trump’s executive order banning refugees and people from seven majority-Muslim countries from entering the United States in the balance. The hearing is set for five in the evening, and it should last an hour, according to the New York Times. The appellate court will review a lower court’s decision from Friday that temporarily halted the travel ban and blocked key parts of Trump’s order. It’s unclear when a ruling in the case will be made, but whatever happens, Texas will be impacted. According to the 2010 religious census, Texas has the biggest Muslim population in the country, and the state is a popular destination for refugee resettlements. The ban has so far separated immigrant Texans from their families, and the rollout caused chaos at airports around the state and the nation. No matter what the appellate court decides, it’s entirely possible that the losing side could get the case to go before the U.S. Supreme Court, so today’s hearing—and whatever ruling comes out of it—could just be the beginning of the biggest challenge yet to Trump’s young administration. There’s certainly no shortage of opposition to the ban. More than a dozen states, about one hundred Silicon Valley tech companies, upwards of 280 law professors, and ten former high-ranking diplomatic and national security officials, including John Kerry, Madeleine Albright, Leon Panetta and Michael Hayden, all signed their names to affidavits opposing the ban, according to the Washington Post. You can listen to the hearing live at this link.

Decision Day
The Texas Senate is set to vote on Senate Bill 4 today, which would make it easier for the state to crack down on local governments and jurisdictions with perceived “sanctuary” policies for undocumented immigrants, according to the Austin American-Statesman. The bill received fierce criticism right from the start, but it doesn’t seem to have made much of a difference to state lawmakers—during a sixteen-hour Senate State Affairs Committee hearing for the bill last week, hundreds of folks testified against it, but the committee still approved the bill on a 7-2 vote. The bill would allow the state to withhold state funds from jurisdictions that implement policies discouraging police from working with federal immigration agencies. It give the state more leeway to issue punishments similar to what Governor Greg Abbott has done to Travis County, which was stripped of more than $1.5 million in state grant funding for a variety of programs amid Abbott’s feud with Travis County Sheriff Sally Hernandez for implementing what the governor believes is a sanctuary policy in Travis County jails.

Moving Forward
The case of Zuzu Verk, a 22-year-old woman who was missing in Alpine since October, saw another big development on Monday. Officials confirmed that the body found in a shallow grave outside the small West Texas town on Friday was Verk, and a second arrest was made in connection with her death, according to the Dallas Morning News. Verk’s ex-boyfriend Robert Fabian was arrested on Saturday and charged with tampering with or fabricating physical evidence by concealing a human corpse, and on Monday the Brewster County Sheriff and Alpine Police announced that Chris Estrada, a friend of Fabian, was also arrested and charged with the same crime. The finding of Verk’s body marked a sad end to a long search, one that left Alpine shaken. But more answers may come soon. “Why was she killed and exactly how?” Brewster County Sheriff Ronny Dodson said at a press conference on Monday, according to the Morning News. “Those are the big questions now.”

JerseyGate
Someone stole Tom Brady’s game-worn jersey after the Super Bowl in Houston on Sunday night, and Lieutenant Governor Dan Patrick is not messing around about it. On Monday, Patrick announced he had put the Texas Rangers on the case. “In Texas we place a very high value on hospitality and football,” Patrick said in a statement. “Tom Brady’s jersey has great historical value and is already being called ‘the most valuable NFL collectable ever.’ It will likely go into the Hall of Fame one day. It is important that history does not record that it was stolen in Texas.” This sort of sounds like a case best left for Scooby Doo and the gang rather than the Texas Rangers (many of you on our Facebook page wondered if the Rangers might have better things to do), but what may be even more disconcerting than a stolen sports jersey is the aside Patrick made in his statement regarding his sports team allegiance: “I’m a Texans and Cowboys fan first.” Excuse us, Lieutenant Governor, but you’re not allowed to do that. You can only pick one.

Someone drew anti-Semitic graffiti at a Beaumont park Beaumont Enterprise