“Members of the Satanic Temple are not required to comply with the Texas rule on fetal remains.”

—The Satanic Temple in a statement posted on its website. The group threatened to sue the state of Texas if it forces temple members to abide by the new rule requiring the burial of fetal remains, which is set to go into effect this month. The temple claims burial rights are “a well-established component of religious practice,” and argues the rule would violate the First Amendment rights of the members. 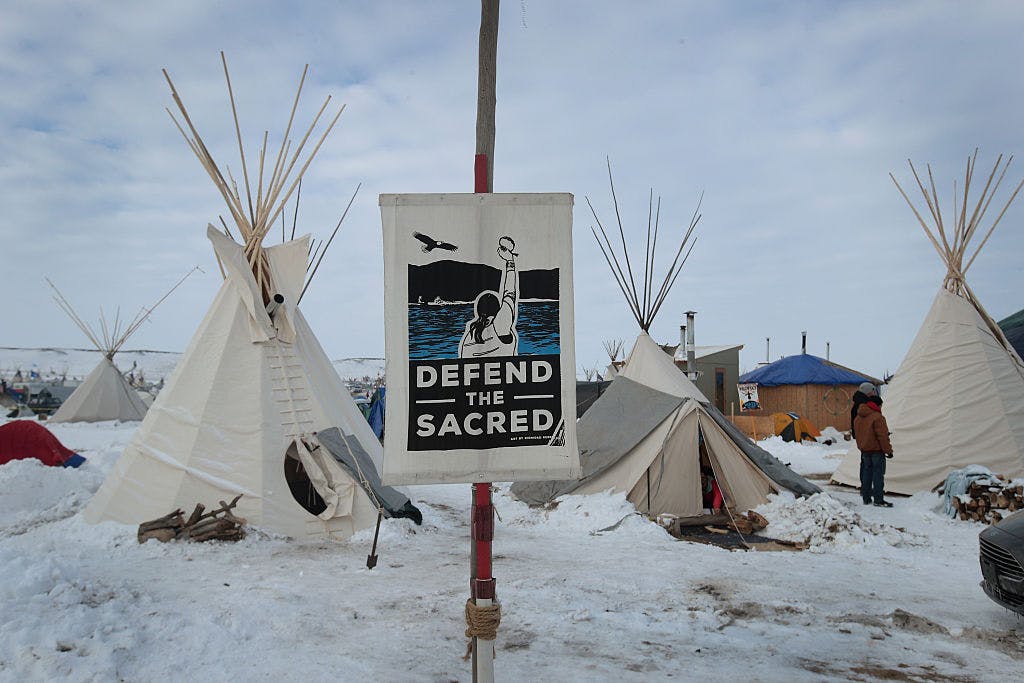 Protests Heard
A controversial plan to run the Dakota Access Pipeline through a North Dakota lake was blocked on Sunday by the U.S. Army Corps of Engineers. Months of protests by the nearby Standing Rock Sioux tribe brought attention to the project and its potentially harmful impact on the tribe’s main water source and sacred ancestral lands, according to the New York Times. Thousands of protesters camped out in teepees, endured North Dakota’s frigid weather, and held strong as private security and militarized police sicced dogs on the protesters, shot at them with rubber bullets, and sprayed them with mace and water cannons. The massive protest movement spread nationwide and made it down to Dallas, where Energy Transfer Partners—the company behind the pipeline—is based. CEO Kelcy Warren sits on the Texas Parks and Wildlife Commission, and in November protesters gathered in Austin to call for him to step down before voting on an East Texas pipeline easement, arguing he had a conflict of interest (Warren recused himself from the vote). The U.S. Army Corps of Engineers’ decision is a huge win for the protesters and a big blow for Warren, who had long downplayed the negative effects of the pipeline. In a statement on Sunday night, Energy Transfers Partners called the Corps’s decision a “purely political action,” and seemed defiant in the face of the mandate that they find an alternative route for the pipeline. It’s unclear what will happen to Warren’s project when President-elect Donald Trump takes office in January. Warren and Trump are basically best buds—as the Washington Post notes, Trump has owned stock in Energy Transfer Partners, and Warren was a big-time contributor to Trump’s campaign. Trump publicly supported the completion of the pipeline in December. It’s anyone’s guess what he’ll do about it once he’s in the Oval Office.

Pension Tensions
A recent Moody’s report analyzed pension debt in local governments across the country, and Texas cities fared, uh, not great. The state’s four largest metros all cracked the top twelve cities with the largest pension liabilities, with Dallas ranking second, Houston fourth, Austin ninth, and San Antonio twelfth, according to the Texas Tribune. Texas’s Great Quartet of Debt combined for a total of $22.6 billion worth of pension fund shortfalls. Dallas’s dire pension situation made national news recently, with the New York Times declaring in November that Big D is facing a “Texas-sized threat of bankruptcy.” Not good! Luckily, Dallas apparently has a plan to ease its pension tension, as indicated by a city council briefing posted online Friday night. But the briefing was, well, brief, and thus light on specifics. According to the Dallas Morning News, Mayor Mike Rawlings and the Dallas city council will reveal the entire plan on Wednesday.

Good Trend
County jails in Texas saw about 60 percent fewer in-custody suicides than 2015, according to the Texas Tribune, and the big drop can likely be attributed to the changes spurred by the death of Sandra Bland, whose death prompted national protest and calls for reform. Shortly after Bland was found dead in a Waller County Jail cell in July 2015, jails started using new and improved screening forms to better flag potentially suicidal inmates during the screening process. Those forms are being hailed as a big reason why the state saw only fourteen jail suicides in 2016, compared to a record thirty-four in 2015 and an annual average of twenty-three. Still, fourteen suicides is a lot. According to the Tribune, counties need more funding toward mental health services for inmates and better training for employees. “That would go a long way toward trying to achieve a zero number,” one county sheriff told the Tribune.

The Replacements
The University of Texas at Austin is going to pay new head football coach Tom Herman at least $25 million over the next five years. University regents didn’t even flinch at the idea of forking over such a large sum of guaranteed money to a guy who’s only been a head ball coach for two years, voting unanimously on Saturday to approve Herman’s contract. “We’ve got a great coach,” university President Greg Fenves told the Associated Press. “It’s a very fair contract, fair to him and fair to the university.” Meanwhile, the list of possible candidates to fill Herman’s old gig at the University of Houston has already been shortened by at least one name. After ESPN reported on Saturday that the Cougars were set to interview former Baylor coach Art Briles, the university made it very clear that Briles will not be considered for the position. “Earlier this week Art Briles expressed interest to me regarding the Houston head coach position,” UH Vice President of Athletics Hunter Yurachek said in the statement, according to the Houston Chronicle. “After discussion with University of Houston leadership, we developed a list of candidates to be interviewed that did not include Art… I want to be clear that University leadership was unanimous regarding this decision.”