“This actually is my first rodeo.”

—Facebook CEO Mark Zuckerberg while visiting the Fort Worth Stock Show and Rodeo, according to the Dallas Morning News. Zuckerberg cracked this very original joke on a trip to the DFW. Zuckerburg’s primary reason for the Texas trip was to testify in a Dallas in an intellectual property rights lawsuit over virtual reality technology that Facebook bought in 2014. When in Rome! 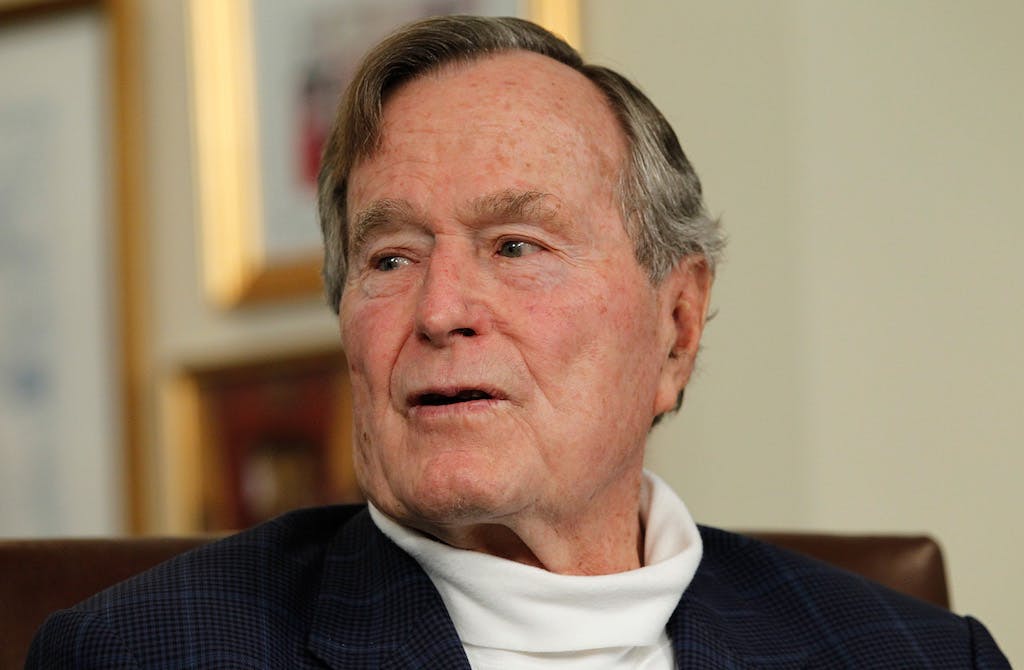 Hospital Scare
Former President George H.W. Bush is in the ICU at Houston Methodist Hospital with pneumonia, according to the Houston Chronicle. As of late Wednesday night, his condition was reportedly (and thankfully) stable, according to a family spokesman. The 92-year-old was admitted to the hospital on Saturday after experiencing shortness of breath and was transferred to the ICU on Wednesday. “The former president still has a row to hoe, but never bet against the Bushes,” spokesman Jim McGrath told the Chronicle. “There’s no one more resilient.” Bush’s wife, 91-year-old Barbara, was also hospitalized on Wednesday after she too experienced fatigue and coughing, though McGrath said doctors diagnosed her with bronchitis, not pneumonia. H.W. Bush was sedated and underwent some sort of medical procedure on Wednesday “to protect and clear his airway” and treat a respiratory problem, though it’s unclear exactly what procedure he had done. Although Bush’s condition is reportedly stable, McGrath admitted that the situation still isn’t ideal: “92, pneumonia and ICU aren’t a good fact pattern on the face of it,” he told the Chronicle. President Barack Obama gave a shout out to the Bushes at his last news conference on Wednesday, saying, “they have not only dedicated their lives to this country, they have been a constant source of friendship and support and good counsel for Michelle and me over the years. They are as fine a couple as we know. And so we want to send our prayers and our love to them.” President-elect Donald Trump, meanwhile, tweeted that he’s “looking forward to a speedy recovery” for the Bushes.

Big Day
President-elect Donald Trump’s pick for energy secretary, Rick Perry, will go before the Senate Energy Committee on Thursday for his confirmation hearing, according to ABC News. He’s put in some work ahead of the hearing, particularly in making sure he knows the full extent of responsibilities that come with the gig, as the New York Times reported Wednesday, and, in the past few weeks, Perry also shed most of his corporate and financial ties to the oil and gas industry organizations that could have been perceived as conflicts of interest for an energy secretary. But he will still probably face particularly difficult questions about his lack of scientific expertise and the fact that he once promised to eliminate the department if elected president. Thankfully, the former governer was also once a contestant on Dancing With The Stars, so he certainly isn’t uncomfortable performing before tough crowds (here’s hoping he leaves the dance moves and sequined cowboy suits at home this time, though). If you’re interested, you can watch the hearing on C-SPAN starting at 8:30 this morning.

Diamond Legends
A pair of Texas baseball heroes were voted into the Major League Baseball Hall of Fame on Wednesday: Ivan Rodriguez, who spent more than twelve seasons with the Texas Rangers and is arguably the best catcher of all time (and, inarguably, has one of the greatest nicknames of all time, “Pudge”); and Jeff Bagwell, who spent his entire career hitting the heck out of the ball while manning first base for the Houston Astros. As the Dallas Morning News notes, Rodriguez is sort of the Rangers’s first true Hall of Famer (with all due respect to Nolan Ryan, who is enshrined in bronze with a Rangers cap but didn’t get to Arlington until he had reached the twilight of his career). Rodriguez hit .296 over his career with 311 home runs, was a fourteen-time All-Star, garnered thirteen Gold Glove awards, and won the American League MVP in 1999. Bagwell was the National League MVP in 1994 and is the Astros’s all-time leader in home runs, with 449, according to the Houston Chronicle. Both players, however, played their careers during baseball’s infamous steroid era, and there were rumors of performance enhancing drug use surrounding them both, though the rumors were never substantiated by hard evidence. Clearly voters didn’t think it was enough to warrant keeping them out of the Hall of Fame.

Mayoral Mess
Corpus Christi Mayor Dan McQueen suddenly resigned on Wednesday, according to the Corpus Christi Caller-Times. McQueen quit after only 37 days on the job, and there were hints he might have been on his way out earlier this week when he posted a cryptic note on Facebook before temporarily deactivating his page. McQueen again took to Facebook to confirm his resignation, explaining, essentially, that he just can’t. “Consider this my resignation,” McQueen wrote on the social media account, according to the Caller-Times. “I resign immediately. The city can no longer deal with such differing views and divisiveness. I step down from my position as Mayor, in order to allow the council and city to regain focus on success.” In his short tenure, McQueen ran into a few controversies, all while facing the city’s most recent water safety crisis. According to the Caller-Times, there were questions about McQueen’s stated educational background and about his relationship with his chief of staff, and a few hours before his resignation McQueen also strangely wrote on Facebook that the City Council was “comprised of only High School graduates” (which isn’t true). There’ll be a special election to fill McQueen’s vacated position in a few months.