—San Antonio Spurs head coach Gregg Popovich to reporters, according to the San Antonio Express-News. This bit of real talk was a bit tongue-in-cheek, considering this response basically came amid an exchange with a reporter about the team’s apparent difficulties defending the three-point line. When asked who he’d be voting for on Monday, he said he’d already cast his ballot for Don… Nelson, a former NBA coach who showed Pop the ropes way back when. The real question, however, is when will Pop run for president? 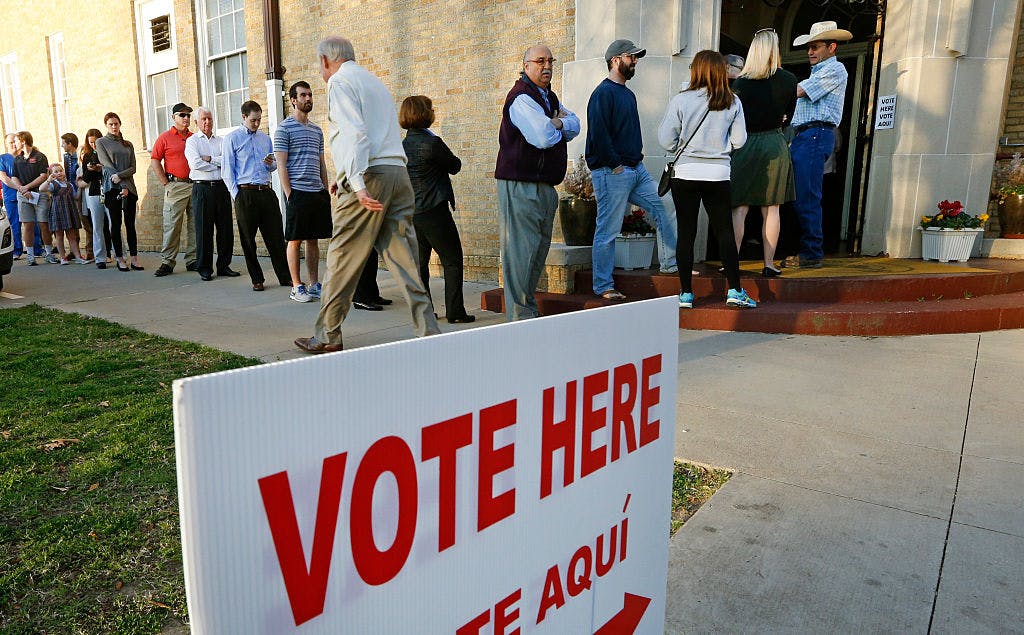 GO VOTE
Today is the day! Cast your ballot. Punch your ticket. Fulfill your American civic duty. Happy Election Day! If you’ve made it this far, congratulations. You’ve certainly earned the right to decide. We’ll spare you a recap of the past year-plus in politics, because if you’ve been living anywhere except underneath a WiFi-less rock, then you probably already know how it’s been. But still, there are a few things you need to know before you head to the polls: first and foremost, like, where are the polls? Google is your best friend for that—simply type in the search engine “where to vote,” and you’ll see the first result will be a handy polling center locator designed by Google; all you have to do is fill in your address and it will tell you where the nearest polling centers are. For the rest of your Election Day needs, here is the voter’s guide from the Dallas Morning News, the Houston Chronicle‘s comprehensive election 2016 headquarters, some answers to your last-minute questions courtesy of the Austin American-Statesman, and the Texas Tribune‘s scoreboard. Here’s the Texas Secretary of State’s “Poll Watcher’s Guide,” the state’s official election night returns tracker, and a refresher of your rights. Here’s a video of a puppy falling asleep. Here’s how to follow along with the New York Times and the Washington Post, both of whom will be dropping their digital paywalls so you can consume their multi-faceted election content for free. For you people who like numbers, here’s the stats-driven FiveThirtyEight, which is good at numbers and stuff. And ProPublica’s Electionland feature is worth checking out too. So, Texans, arm yourselves with knowledge as you go forth today and vote, then sleep well tonight, knowing that when you wake up Wednesday morning, this long nightmare of an election cycle will finally be over.

Fetus And Brimstone
What, you thought that just because today is Election Day that things would quiet down and return to normal by, say, the evening before? Nope. The Dallas Morning News reported late on Monday night that a priest from Amarillo laid an actual aborted fetus on an altar, live-streamed his fetus-accompanied sermon on Facebook, and urged viewers to vote for Republican presidential candidate Donald Trump. According to the Morning News, the priest, Reverend Frank Pavone, a well-known anti-abortion activist, wrote on Facebook that “We have to decide if we will allow this child killing to continue in America or not. Hillary Clinton and the Democratic platform says yes, let the child-killing continue (and you pay for it); Donald Trump and the Republican platform says no, the child should be protected.” According to the Morning News, the sermon lasted an excruciatingly long 44 minutes. The video is firmly nestled in the deep, vast valley of low points so far this election cycle, and the footage is obviously extremely graphic and disturbing, so watch it at your own risk.

BLM Lawsuit
Enrique Zamarripa, the father of slain Dallas police officer Patrick Zamarripa, filed a lawsuit against Black Lives Matter on Monday, blaming the civil rights organization for his son’s murder during Dallas’ sniper attack in July. According to the Dallas Morning News, Zamarripa named the national Black Lives Matter group alongside thirteen other defendants—including the Nation of Islam, Reverend Al Sharpton, the New Black Panthers Party, and Black Lives Matter leader DeRay McKesson—and he is seeking damages of $550 million, alleging the Dallas shooter Micah Johnson was incited by “anti-police rhetoric.” The suit alleges that the defendants have started “a civil war between blacks and law enforcement, thereby calling for immediate violence and severe bodily injury or death.” As the Morning News notes, Zamarripa has fairly high-profile representation in Larry Klayman, an attorney who has sued Hillary Clinton and his own mother.

The story of a Texas meteorite Phys.org