—Destiny Nyanik, of Cedar Park, according to the Austin American-Statesman. Nyanik was one of many Cedar Park residents who showed up at a city council meeting on Thursday, when the council moved to reconsider the city’s new flag. It is a truly strange flag: there’s a horizontal bar of blue above a horizontal bar of green, and straddling a thin white border between the two there are four big white ‘X’s. The resident who submitted the flag’s design said the X’s were meant to represent the barbed wire that strung together cedar posts brought to the area by early settlers. But that artistic interpretation was apparently lost on a lot of folks. 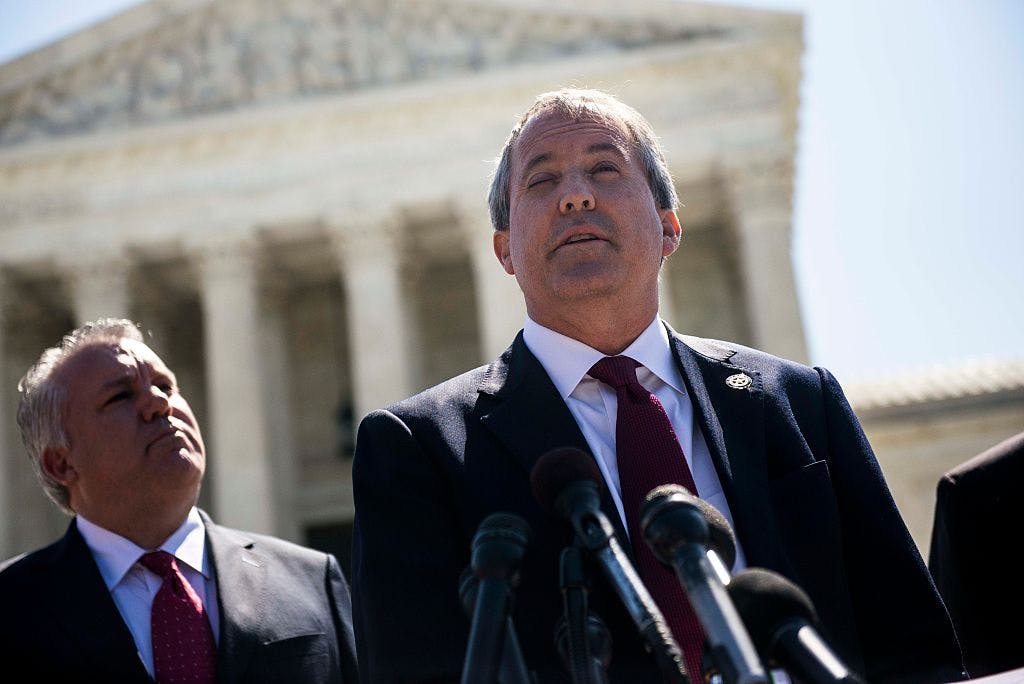 Save The Date
Attorney General Ken Paxton finally has a trial date set for his criminal securities fraud case: May 1, according to the Austin American-Statesman. It’s been almost two years since Paxton was first indicted by a Collin County grand jury and arrested for allegedly recruiting investors for McKinney-based tech company Servergy Inc. without disclosing to the potential investors that he was being paid by the company. Paxton’s attorneys repeatedly tried to have the charges dismissed, and in October Texas’s highest criminal court declined to hear his final appeal, guaranteeing the case would go to trial. If Paxton is convicted on the felony charges, he could face a maximum sentence of 99 years in prison. That would certainly throw a wrench in his re-election hopes, with the 2018 primary elections race starting at around the same time as his trial. His trial date also coincides with the beginning of the last month of the eighty-fifth Texas legislative session, so Paxton will be a pretty busy guy come May. “We’re delighted that the matter is set for trial,” Paxton’s defense lawyer Dan Cogdell told the Statesman. “We’re anxious to begin trial and we’re confident that the right result will happen and Ken will be acquitted.” Paxton himself was rather quiet, however, refusing to talk about the case at a news conference he had set to address human trafficking on Thursday. The Texas Tribune asked Paxton “if Texans can expect to have a full-time attorney general this year, especially in May,” but he declined to answer.

Cold Feet
On Thursday, the White House announced that President Barack Obama is ending the decades-old “wet foot, dry foot” policy for Cuban immigrants, which made it possible for any Cuban who made it to the U.S. to stay and eventually become a legal resident, according to the Associated Press. In short, Cuban immigrants will now be treated just the same as immigrants from other countries so long as Cuba agrees to take back people who are deported. This is a big deal for Texas, as the policy prompted a record number of Cubans to cross the Texas border in the past few years, leaving border cities and refugee resettlement organizations overwhelmed. There was bipartisan support from Texas lawmakers to scale back the special rule. “This makes sense,” U.S. Representative Beto O’Rourke, a Democrat from El Paso, said in a statement Thursday, according to the Texas Tribune. “We shouldn’t be treating Cubans any more favorably than immigrants from any other country.”

Empty Seat
Texas has no state auditor for the first time since Texas created the position 73 years ago, according to the Houston Chronicle. That’s, uh, not good. Longtime auditor John Keel left in early January 2016, according to records obtained by the Chronicle, and while the Texas State Auditor’s Office has continued to operate, it has done so without a captain to run the ship. It seems there’s a good chance we’ll be without an auditor for at least the rest of this legislative session. What gives? Apparently we can look to Lieutenant Governor Dan Patrick and House Speaker Joe Straus on this one. Those guys are responsible for selecting the auditor, and they just can’t seem to get along, sources told the Chronicle. The auditor’s office helps hold state government agencies accountable by conducting audits (duh) to make sure everyone is straight financially and operating efficiently. In an interview with the Chronicle, Keel, the ex-auditor, downplayed the significance of the office operating without a leader, but other office employees and government watchdog organizations are far more concerned.

Water, Texas Ranger
Chuck Norris, the former martial arts star who was best known for his lead role in the TV show Walker, Texas Ranger, is launching a new bottled water business, featuring H2O straight from a natural aquifer on his Lone Wolf Ranch in Navasota, according to the Houston Chronicle. The “CForce” water is already being sold in convenience stores and should make its way to bigger chains like Randall’s and HEB by April. But remember, it’s not just water, it’s water bottled by Chuck Norris. “CFORCE doesn’t flow from the ground; it bursts from an artesian spring with the same unharnessed power and intensity you’d expect from Chuck Norris’ roundhouse kick,” the new product’s website proclaims. You may want to sit down before you take a sip: if the crystal-clear agua isn’t enough to knock you on your ass, then the ultra-aggressive marketing might just do the trick all on its own.

Residents in Pecos are concerned about seismic activity KWES