“They all came out at once and they grabbed that drone. They snatched it like it was the ice cream man.”

—Claude Griffin to KRIV. Griffin runs Gotcha Pest Control in Richmond, and he and his crew recently encountered a particularly pesky pest problem in the form of nearly one million African “killer bees.” Griffin didn’t back down, and his team even had the presence of mind to send a drone up into the sky to document the tricky extermination. 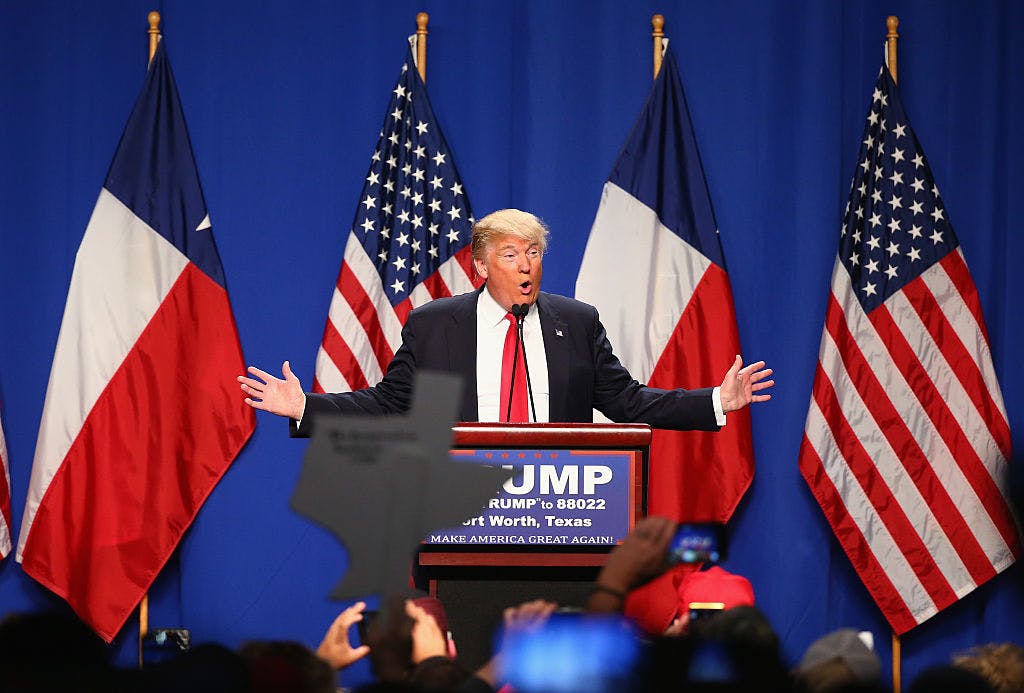 Yuge Jump
Texas might not be so purple after all. Following a wild October in which a handful of polls indicated Republican presidential candidate Donald Trump’s lead in Texas had shrunk to as low as one percentage point ahead of Democratic opponent Hillary Clinton, a pair of new polls shows Trump’s lead has bounced back. According to a poll jointly conducted by NBC News, the Wall Street Journal, and Marist College, Trump leads Clinton among likely voters in Texas 49 percent to 40 percent. Among the poll’s larger sample size of registered voters, Trump’s lead is a little smaller, 45 to 41, just a shade above the 3.8 percent margin of error for that polling group. As the Dallas Morning News notes, the “likely voters” poll is typically the one which poll experts regard as being more accurate. Meanwhile, another poll released on Thursday also shows Trump’s lead in the Lone Star State has grown a bit. According to an Emerson College poll release, “Texas is squarely in the hands of Donald Trump.” The Emerson poll has Trump leading by fourteen points, which puts him in striking distance of former Republican presidential candidate Mitt Romney’s performance when he won the state by sixteen points in 2012. Clinton’s share of voters pretty much stayed the same as the last Emerson poll back in September, but Trump was apparently able to snatch some voters from third party candidates Gary Johnson and Jill Stein. With Tuesday’s election looming, it appears things have returned to the Republican-leaning norm here in Texas.

Pipeline Protest
About one hundred protesters showed up for a fairly routine Texas Parks and Wildlife Department commission meeting in Austin on Thursday calling for commissioner Kelcy Warren to step down, according to the Texas Observer. Warren is the Dallas-based CEO of Energy Transfer Partners, which is behind the controversial plan to plop down the Dakota Access Pipeline to ferry oil from North Dakota to Illinois (he’s also behind the Trans-Pecos Pipeline in West Texas). The project has faced intense resistance from North Dakota’s Standing Rock Sioux tribe, and the company’s harsh crackdowns on protesters there has helped the protest movement gain nationwide support. Protesters in Austin claimed Warren should step down because of what they say is a clear conflict of interest on pipeline-related issues. The commission was supposed to vote on whether to approve a petro-chemical pipeline easement planned to run through the J.D. Murphree Wildlife Management Area in East Texas, but the vote was postponed after Warren recused himself, saying he had too many ties to the vote. According to the Observer, Warren also said he’d meet with a representative of the Society of Native Nations to talk.

Say My Name
Senator Ted Cruz seems to have fully jumped aboard the Donald Trump train. On Thursday, Cruz made his first public appearance to stump for Trump, speaking at a rally in Iowa along with Trump’s ticket partner Mike Pence. According to the Texas Tribune, Cruz had nice words for Pence in Iowa, saying he’s “someone who today I call my friend and I very much look forward to calling Mr. Vice President.” As for Trump? Well, Cruz didn’t exactly say much about him at all. In fact, he didn’t even say his name. When reporters pressed Cruz on the no-name-drop, he pushed back on the implications that he still had serious beef with the Donald. Cruz said he had already cast his ballot for Trump this week, adding, “I’ll make a point: I’m getting ready to get on a gigantic airplane that has Donald Trump’s name painted on the side of it.” Later that day, at a rally for the Republican candidate in Michigan, Cruz made sure to finally say “Donald” and “Trump” together.

City Swindle
El Paso officials admitted that the city was swindled to the tune of $3.2 million, according to the El Paso Times. Somehow the city was duped by an email phishing scam. Apparently, someone posing as a vendor was able to rip off money that had been intended for a streetcar project. The city realized what happened in October after a vendor reported that he hadn’t been paid. After a deeper look at the books, the city found that several large payments to “vendors” had been diverted to fraudulent bank accounts. Whoops. The Times got wind of the scam and started sniffing around on Wednesday, which prompted city leaders to hold a terse press conference that same day to announce that, yes, they had given away a few million bucks to the wrong person. The officials weren’t particularly talkative—the presser lasted about eight minutes and they didn’t answer many questions from reporters, including whether they planned to inform the public about the scam had the Times not forced their hand. Federal investigators have so far been able to recoup about $2 million of El Paso’s lost money, and, for now, El Paso has switched to a more analog and less-scammable method of paying its vendors: paper checks.