“RESOLVED, That the 85th Legislature of the State of Texas hereby reject the notion that the Chilean flag, although it is a nice flag, can in any way compare to or be substituted for the official state flag of Texas and urge all Texans not to use the Republic of Chile flag emoji in digital forums when referring to the Lone Star Flag of the great State of Texas.”

—State Representative Tom Oliverson, of Cypress, in the text of House Concurrent Resolution 75, according to the Houston Chronicle. Oliverson’s newly proposed resolution seeks to keep folks from using the Chilean flag emoji as a substitute for the similar-looking Texas flag, which lacks proper emoji representation. In other words, Oliverson is truly working for the people (and their text emojis). 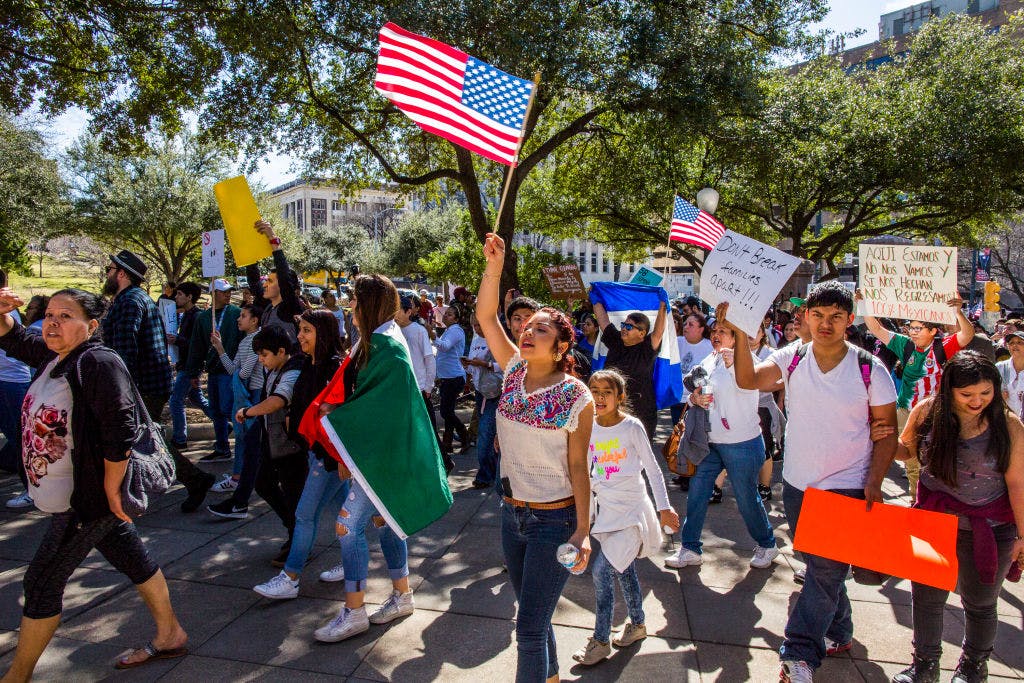 #UnDiaSinMigrantes
After being targeted by several executive orders from President Donald Trump and raids by U.S. Immigration and Customs Enforcement, the nation’s immigrants took a stand on Thursday. The national campaign, “A Day Without Immigrants,” resulted in immigrant workers and students refusing to go to work or attend classes in an attempt to show the impact immigrants have on our communities and, quite literally, what life would be like in the U.S. without them. Participation was high throughout Texas, as the movement reached everywhere from Austin, Houston, Dallas and San Antonio, to Waco, Corpus Christi, Lubbock and Denton. Schools and the restaurant industry felt the brunt of the protest’s impact. According to the Dallas Morning News, more than 1,100 students in Dallas ISD either stayed home or walked out of class in protest, while more than fifty Dallas businesses—including supermarkets, restaurants, furniture stores, and insurance companies—shuttered in solidarity. The Austin American-Statesman reported that 36 percent of students were absent in Del Valle ISD, which has an enrollment of about 3,000. Popular restaurant chain Torchy’s Tacos closed locations across the state, including in Houston and Austin. And hundreds of protesters took to the streets in the state’s capital. “Donald Trump may be president, but this is our country,” seventeen-year-old Noel Covarrubias, a U.S. citizen, said during a speech to protesters in Austin, according to the Statesman. “This is our city, and no one’s going to come take it from us. No one’s going come take our parents, no one’s going to come take our brothers, and no one’s going to ruin our families.”

Breaking The ICE
Speaking of the aforementioned ICE raids, details of what went down last week are still coming to light. According to the San Antonio Express-News, one of the more than 600 undocumented people swept up in the nationwide raids last week was a nineteen-year-old Josue Romero, an art student in San Antonio who had received his work permit under former President Barack Obama’s Deferred Action for Childhood Arrivals program for young undocumented immigrants. Romero, an immigrant from Honduras, was arrested on Tuesday on a marijuana charge and was turned over to ICE by Bexar County. He was detained for two days and released on Thursday evening after his story drew national attention. He is the second known DACA recipient to have been arrested in the ICE raids, sparking concerns that President Donald Trump’s administration will not continue Obama’s policy of not targeting DACA people for ICE arrests. Following a turbulent meeting with ICE officials in Washington, D.C. on Thursday, U.S. Representative Joaquin Castro, of San Antonio, said on Twitter that “it’s hard not to conclude that President Trump has started his mass deportation plan,” adding, “Only Dreamers with no offenses (including traffic tickets) or perceived gang affiliations seem exempt.”

Pot Policy
Harris County announced on Thursday a new marijuana policy that will decriminalize low-level possession of the drug. According to the Houston Chronicle, Texas’s most populous county will offer a four-hour drug education class to misdemeanor offenders found with less than four ounces of marijuana as an alternative to making an arrest, giving a ticket, or requiring a court appearance. District Attorney Kim Ogg, Houston Mayor Sylvester Turner, Houston Police Chief Art Acevedo, and Harris County Sheriff Ed Gonzalez announced the new policy in a joint press conference on Thursday, saying it could save the county as much as $25 million, save officers some precious time, and divert as many as 12,000 people out of the criminal justice system. The announcement drew praise from criminal justice reformers and advocates for marijuana legalization, but it left others fuming. “Unlike Harris County, Montgomery County will not become a sanctuary for dope smokers,” Montgomery County District Attorney Brett Ligon said in a press release. The new policy starts March 1.

Feds Watching
State Senator Carlos Uresti had a bad day on Thursday, when the FBI and IRS raided his law office in San Antonio, confiscating documents and other stuff. According to the San Antonio Express-News, the raid was in connection to a now-bankrupt fracking sand company that has been accused of fraud. Uresti provided legal services for FourWinds Logistics, held a one percent stake in the company, and helped recruit investors. The company went under in 2015 and has been accused of defrauding investors—three FourWinds officials have already been charged in connection with a scheme to defraud investors, and pleaded guilty to a felony charge, though they have yet to be sentenced. The Express-News reported on the scheme back in August, finding that the company’s CEO blew investor money on himself, and that one investor recruited by Uresti lost $900,000. No arrests were made during the raid. “Today, FBI agents are in my office, reviewing our documents as part of their broad investigation of the FourWinds matter,” Uresti said in a prepared statement on Thursday, according to the Express-News. “I have instructed my staff to fully cooperate with the federal investigators. I will help them in whatever way I can.”

After three years in prison, the Rangers’ Matt Bush is making the most of his second chance Dallas Morning News

ICE wants to return to a 3,000-bed South Texas detention facility that it vacated in 2011 Valley Morning-Star