—Omar Rachid to the Victoria Advocate. Rachid, a member of the Victoria Islamic Center, started a GoFundMe page to raise funds to rebuild the mosque after it burned to the ground Saturday. In just five days, more than 21,000 people have donated to help raise than $1 million. 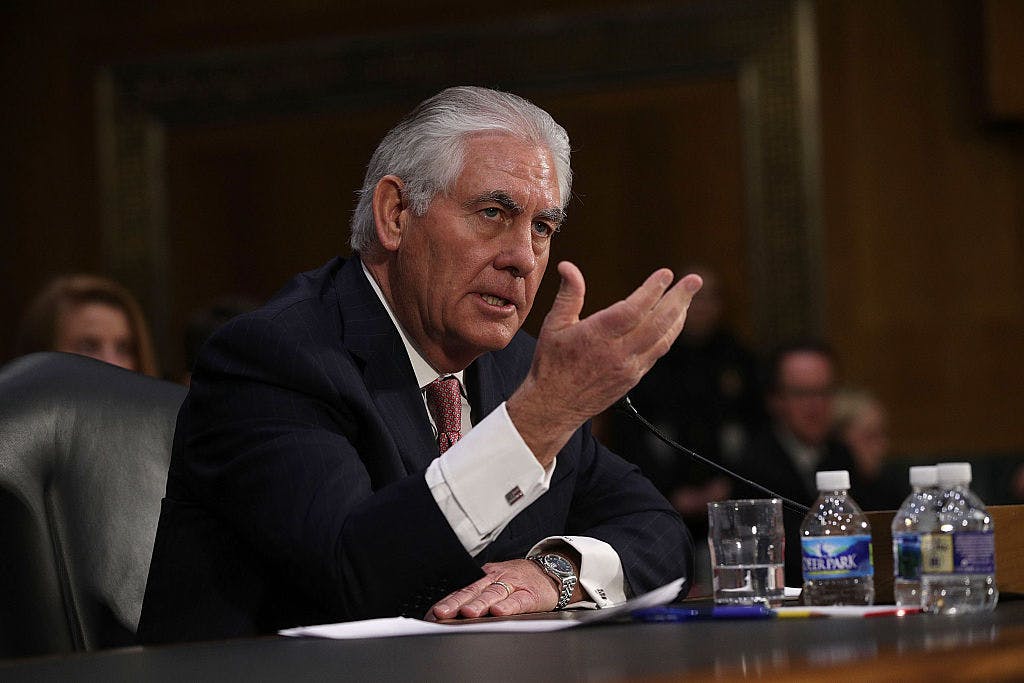 Secretary Rex
Well, it’s official: a Texan is President Donald Trump’s top cabinet member. Former ExxonMobil CEO Rex Tillerson, a native of Wichita Falls, was confirmed as Secretary of State by the Senate on Wednesday in a 56-to-43 vote. According to the New York Times, the 43 votes against broke a Senate record for a Secretary of State confirmation vote. The previous record for most opposing votes was held by Henry Clay, who received fourteen votes against his confirmation way back in 1825. The Tillerson vote was pretty much split along party lines—only three Democrats voted to confirm, while no Republicans voted against confirming. At the heart of the opposition to Tillerson was concern over his relationship with Russia and Vladimir Putin while he was CEO of Exxon, but Tillerson apparently did enough during his confirmation hearing to calm those concerns among enough Senators. Tillerson inherits what will likely be major foreign policy challenges as a result of Trump’s recent executive actions upending international relationships by targeting immigrants and refugees and his promises to continue a nationalistic “America first” approach. During the swearing-in ceremony Wednesday, Trump said Tillerson gets “the importance of strengthening our alliances and forming new alliances to enhance our strategic interests and the safety of our people… It’s time to bring a clear-eyed focus on foreign affairs, to take a fresh look at the world around us, and to seek new solutions grounded in very ancient truths.” It remains to be seen what any of that means.

Twinning
BEYONCE. PREGNANT. TWINS. Beyoncé is pregnant with twins! Beyoncé is pregnant with twins! In a matter of months, Queen Bey will bless us with a set of beautiful twin babies. We’re so lucky, y’all. We (yes, we) get two mini Beyoncés at the same time. The Texas icon announced her pregnancy in magnificent maternal splendor fitting for the true queen that she is. Bey revealed her two-fer on Instagram with a perfectly staged pregnancy portrait, in which she’s draped in a majestic veil amid a backdrop of a bouquet of fresh flowers. “We would like to share our love and happiness,” read the post’s caption. “We have been blessed two times over. We are incredibly grateful that our family will be growing by two, and we thank you for your well wishes.” (Jay-Z is also having twins.) As usual, breaking Beyoncé news broke the Internet. Within eight hours of being posted, Bey’s Instagram pic shattered the social network’s record for most “likes,” flying by the previous record of 6.3 million, which was held by celebrity (and fellow Texan) Selena Gomez, according to the Mirror.

Sanctuary Under Siege
Governor Greg Abbott made good on his threat to cut off some state grant funds to Travis County amid a feud with the county’s sheriff, Sally Hernandez, who implemented a jail policy that’s moderately friendly to undocumented immigrants. On Wednesday morning, Abbott announced the cuts, which amount to about $1.5 million, that would have gone towards a variety of services, including domestic violence and victim outreach programs, drug abuse diversion programs, family drug treatment programs, and a special court aimed at helping military veterans, according to the Houston Chronicle. Hernandez’s sanctuary policy limits Travis County’s cooperation with federal immigration authorities by requiring the detainment of undocumented immigrants on behalf of the feds only when they are charged with serious crimes, like murder, sexual assault, or human trafficking, according to the Austin American-Statesman. Abbott is apparently looking for ways to cut off the flow of even more state dollars to Travis County, and with President Trump’s new executive order promising to stop federal funds to local governments with sanctuary policies, county officials told the Statesman that they could see $52 million—as much as half of the county’s budget—ultimately go up in smoke.

Heads Or Tails
President George H.W. Bush apparently doesn’t have any lasting effects from his lengthy hospital stay. Almost immediately after he was released from Houston Methodist after spending two weeks there receiving treatment for pneumonia—including several days spent intubated in the intensive care unit—Bush was already making moves. On Wednesday, a family spokesperson announced Bush had accepted an offer to flip the coin at midfield before Super Bowl LI in Houston this Sunday, according to the Houston Chronicle. “The Bushes didn’t hesitate for one second in accepting it,” family spokesman Jim McGrath told the Chronicle. “They couldn’t be prouder of their hometown and the Texans organization.” McGrath also said that the prospect of flipping the coin before the big game may have helped the 92-year-old’s strong recovery. “He always has a goal on the horizon, something to keep him charging forward,” McGrath said. “I have no doubt that this was one of them.”

A family in Jones County found one rattlesnake in their toilet, which led to the discovery of TWENTY-FOUR more snakes in their home KTAB