“You can’t believe anything that comes out of his mouth. It changes day to day, depending on the situation and what he needs at the moment.”

—Gregg Popovich on president-elect Donald Trump, according to Sports Illustrated. The outspoken San Antonio Spurs head coach keeps going in on Trump, telling reporters on Wednesday that Trump’s appointment of Steve Bannon as his chief strategist is “troublesome,” while also criticizing Trump for being dishonest. 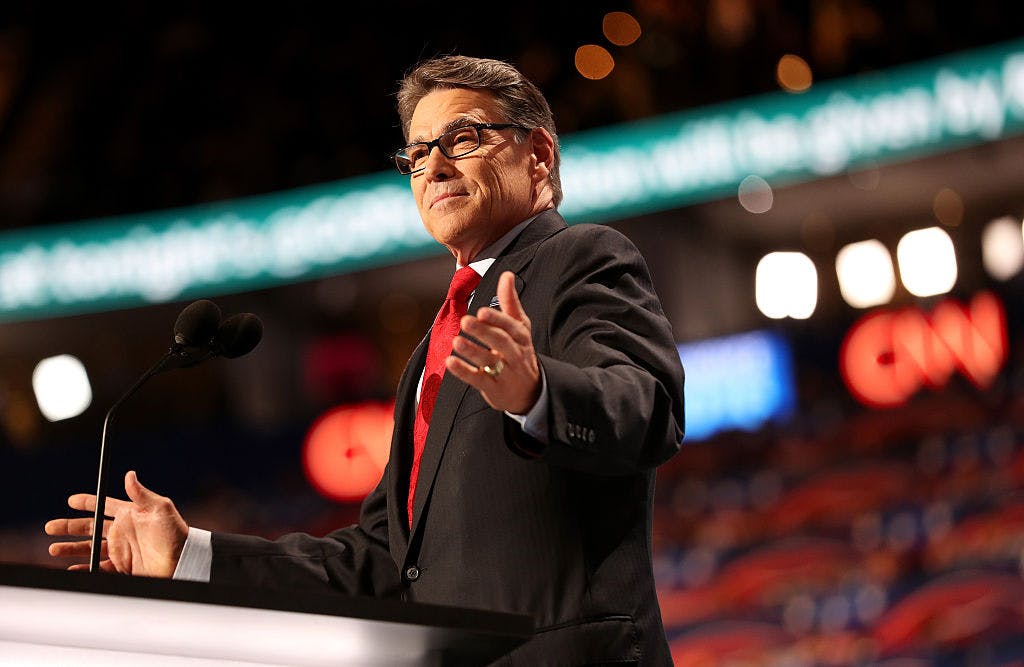 Cabinet Dance
Rick Perry, fresh off his bedazzled-cowboy-shirt-wearing, corn-dog-passing, power-skipping performance on reality TV show Dancing With the Stars, is a top candidate for a spot in president-elect Donald Trump’s cabinet. Perry, who was also once governor of Texas and twice ran for president, is “being discussed” as a possible fit for energy secretary, according to the Wall Street Journal. This is particularly wild for a few reasons. First, as noted earlier, Perry’s most recent time in the spotlight was an actual dance stage spotlight, and if he does become energy secretary, he will almost certainly be the first politician to make the jump back from the reality TV circuit into the world of policy and bills and important stuff like that. Second, Perry called Trump, who is now potentially his future boss, a “cancer on conservatism” and a “barking carnival act” last year (though Perry later changed his mind and endorsed Trump). Third…uh, third… hmm, what was the third one again? Can’t remember the third one. Sorry. Oops. Wait! Wait! We’ve got it! Perry may have muffed it on stage during that infamous debate debacle, but he later clarified that the third agency that he wanted to get rid of was the Department of Energy, the very department he could be tasked with leading. Is this real life? On the bright side for Perry, at least he (probably) won’t get beat out by Vanilla Ice for this particular gig.

Next Book
The Texas State Board of Education unanimously rejected a proposed Mexican-American history textbook in an early vote on Wednesday, pretty much ensuring that it won’t pass the board’s final vote on Friday. According to the Texas Tribune, the board shot down the textbook 14-0, a blowout loss for a book that has been surrounded by controversy since it was first submitted last year and critics quickly pointed out that the book contained hundreds and hundreds of factual inaccuracies (among the more laughable mistakes: in one section, the book claimed communism caused natural disasters) and was also racist, implying Mexican Americans are lazy and that the Chicano movement was out to destroy society. Despite the vote, the book could potentially land on students’ desks anyway, according to the Austin American-Statesman. One member of the board assured the book’s publisher that the vote “wasn’t meant to censor” her, and told her she could still sell the book to school districts even if it gets trashed by the board on Friday.

Untapped Texas
Apparently there are twenty billion barrels of oil out there below a big chunk of West Texas. That is a lot of oil. The figure comes from a report released on Tuesday by the U.S. Geological Survey, according to the Dallas Morning News. The massive West Texas shale formation containing all that untapped black gold goes by the name of Wolfcamp, and apparently it’s not a huge surprise that the formation is oil-rich. “The estimate is just a reflection of what a lot of the companies [drilling] out there already suspected,” one analyst told the Morning News. But it’s still a big deal. According to the Austin American-Statesman, this is “the single largest U.S. unconventional crude accumulation ever assessed,” and the play could be worth $900 billion. “What makes this unique is that there are not one or two layers, but four or five—it’s a real layer cake of opportunity,” one expert told the Statesman. Layer cake sounds pretty good.

Hotel Snub
Mark Cuban’s Dallas Mavericks are one of three NBA teams that have stopped staying at hotels owned by president-elect Donald Trump this season, and the decision to stay elsewhere was made “in part to avoid any implied association” with Trump. At least, that’s what anonymous sources told ESPN. When the Associated Press asked Cuban about the report, he didn’t say much, only telling the AP that the lodging decision “was made months ago. Not recently.” Of course, the tech billionaire was one of Trump’s most outspoken critics during the election, so it wouldn’t be too surprising if the Mavs aren’t staying at Trump hotels for ideological reasons as much as logistical ones. For what it’s worth, the other two teams didn’t have much to say, either. The Milwaukee Bucks pretty much “non-commented” in response to ESPN’s report, while the Memphis Grizzlies’ head coach denied that the hotel decision had anything to do with Trump. In more Mark Cuban news, he recently reinstated media credentials for a pair of ESPN reporters after revoking their press passes earlier this month.