“Anger shouldn’t drive policy. What should drive policy is what is best for people who are angry.”

—George W. Bush in Dallas on Tuesday, according to the Dallas Morning News. Bush detailed some of his thoughts on politics while speaking to members of the North American Strategy for Competitiveness at the George W. Bush Institute in Dallas, but he stopped short of criticizing his successors, saying instead that he doesn’t believe that would be “helpful,” and adding that “it’s a hard job to begin with.” 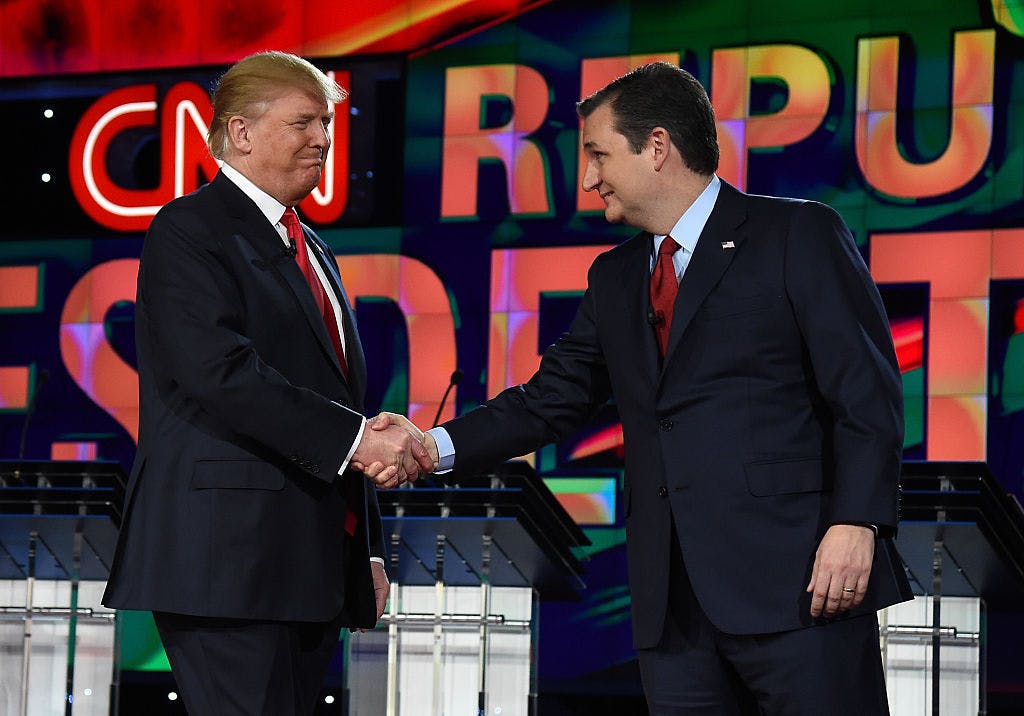 Hot Date
Senator Ted Cruz met with president-elect Donald Trump at the real estate mogul’s tower in New York City on Tuesday, and though Cruz didn’t tell reporters outside what the two had talked about, someone “familiar with the matter” later spilled the beans to Bloomberg Politics that Cruz is apparently a candidate to serve as attorney general under Trump. Former New York Mayor Rudy Giuliani was said to be the favorite for the AG role earlier this week, but he’s since been bumped up to Trump’s top choice for secretary of state, leaving an opening for Cruz. This comes after South Carolina Senator Lindsey Graham said on Monday that he thinks Cruz would make a good nominee for the open U.S. Supreme Court spot, telling reporters that he “would put Ted Cruz on that list, and that “there is no stronger constitutional conservative than Ted Cruz,” according to Politico. This, of course, came from the same guy who once said that Cruz is so hated in Washington, D.C. that you could murder him on the floor of the Senate and get away with it. If Cruz does end up taking a position in Trump’s cabinet, it would be a pretty awkward situation, considering the barbs those two lobbed at each other as rival candidates during a brutal presidential campaign. In case you forgot, Trump basically called Cruz’s wife ugly, assigned him the nickname “Lyin’ Ted,” and implied Cruz’s dad killed John F. Kennedy. Cruz, meanwhile, called Trump a “sniveling coward,” a “pathological liar,” a “serial philanderer,” and “utterly amoral.” Cruz also refused to endorse Trump at the Republican National Convention before he flip-flopped and (reluctantly) endorsed Trump later on. No matter what position Cruz may be up for, these guys would make a weird team.

Fall of Romo
It appears that the Tony Romo era is over in Dallas, and the transfer of power was peaceful. The veteran Cowboys quarterback announced on Tuesday that the QB job belongs to rookie Dak Prescott, whose strong play calling helped lead the team to an 8-1 record while Romo recovered from an injury. Romo got pretty deep in the statement he read at Tuesday’s press conference. “Getting hurt when you feel like you have the best team you’ve ever had was a soul crushing moment for me,” Romo said. “It’s a dark place. Probably the darkest it’s ever been.” But he said the injury has also given him a chance for reflection. He’s seen the light, and that light is Dak Prescott. “He’s earned the right to be our quarterback,” Romo said. “As hard as that is for me to say, he’s earned that right.” So, what’s next? Romo, 36, isn’t getting any younger, but he’d still be a serviceable starting quarterback for quite a few NFL teams. According to ESPN, we could possibly see Romo wearing a New York Jets, Chicago Bears, Denver Broncos, or Arizona Cardinals jersey sometime in the near future. But he’ll always be a Cowboy at heart.

Textbook Trouble
With the State Board of Education set to decide later this week if it will approve a controversial Mexican-American history textbook for use in schools, critics of the textbook rallied in Austin on Tuesday as the book’s publisher defended her work during a hearing before the board, according to the Dallas Morning News. Among the book’s many issues: it calls Mexican immigrants “lazy,” says Chicano activists were out to “destroy society,” and contains hundreds and hundreds of factual errors, critics say. “This book would only perpetuate that hatred,” board secretary Ruben Cortez said, according to the Morning News. “This book can’t see the inside of any classroom.” The book’s publisher, Cynthia Dunbar, said in the hearing that the critics just weren’t reading the passages in question thoroughly enough. “We’ve done a most thorough review and abided by the proclamation set out by the state,” Dunbar said. “We went back—even though we didn’t have to—and made revisions based on numerous amounts of testimony.” But the board was hard to convince. “I do believe what you submitted was a bad book,” one board member told Dunbar. Ouch.

Pipeline Protest
A few hundred protesters took to the streets of Austin on Tuesday in solidarity with the Standing Rock Sioux tribe that has been fighting the construction of the Dakota Access Pipeline, according to the Austin American-Statesman. The protesters gathered at the Texas Capitol grounds and marched to a few banks in the city to protest their investments in the pipeline. The protest was peaceful and no arrests were made. This is the second time in November that protesters have descended on Austin to fight the pipeline—they gathered outside of a Texas Parks and Wildlife Commission meeting earlier this month during a vote on a smaller Texas pipeline, to protest what they felt was a conflict of interest for commissioner Kelcy Warren, CEO of Energy Transfer Partners, the Dallas-based company behind the Dakota Access Pipeline. The protesters were fresh off of a small victory on Monday, when the Army Corps of Engineers said the oil company couldn’t continue building the pipeline until it finishes discussions with the Standing Rock tribe about possible risks associated with it.