“You’ve got to roll up your sleeves, pull down your pants, and pee with LGBT.”

—a new digital ad shot by Austin filmmaker Richard Linklater. “Taking a Seat, Making a Stand” is part of the ACLU’s push against “the bathroom bill.” 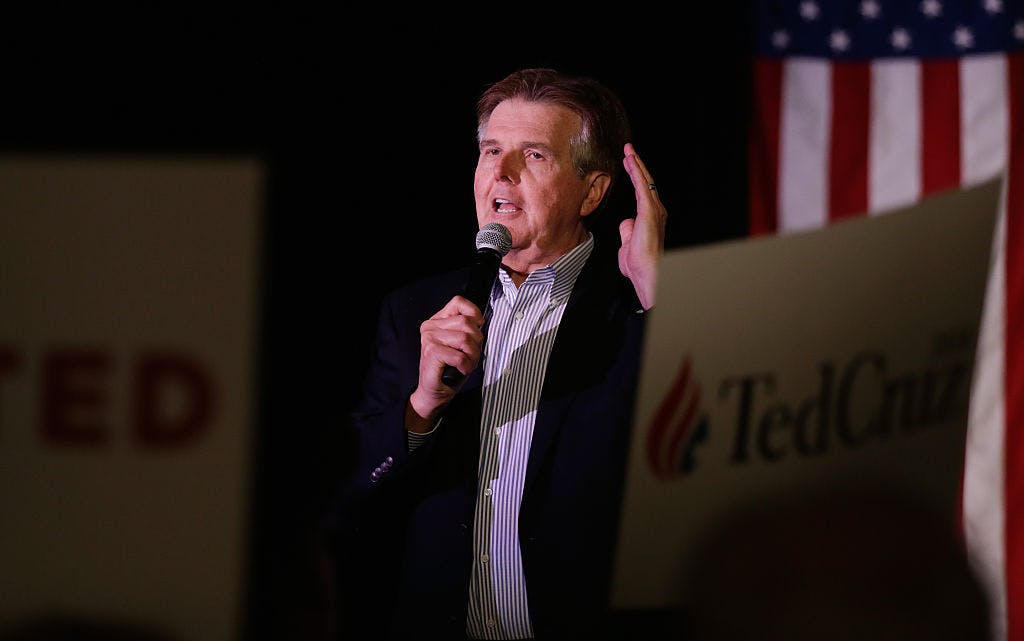 The Flood
Lieutenant Governor Dan Patrick’s office has been bombarded by messages from citizens about his so-called “bathroom bill,” which would force people in public schools, public universities, and government buildings to use restrooms that align with their biological sex. According to the San Antonio Express-News, the bill has truly opened up the floodgates. The Express-News filed an open records request and tallied the number of folks who reached out to Patrick’s office to express either their support or opposition to the bathroom bill. In just the two weeks since the bill was filed, an incredible 10,000 phone calls, emails, letters, smoke signals, and attempts at telepathic communication (OK, maybe not those last two, but you get the point) flowed into Patrick’s office deriding the bill. About 200 messages, meanwhile, expressed support. Among Texas’s political power players, Patrick, who spearheaded the legislation, is definitely feeling the brunt of the pushback against the bill. According to the Express-News, about 800 people contacted Governor Greg Abbott since last summer, while about 200 folks reached out to House Speaker Joe Straus in that same timeframe. Of course, as one Rice University political scientist told the Express-News, people are generally less likely to contact a public official regarding policies they actually agree with. But the opposition seems particularly vocal. “I was voting Republican before you could spell it. This is stupid,” one rancher from Sinton wrote in an email to Abbott, according to the Express-News. “Do I wear my birth certificate and drivers license on my shirt before I make a bathroom call or do I just drop my pants before I go in so that someone can check the plumbing. I don’t vote for stupidity. Don’t expect another vote from me if you support this.”

Twisters And Shout
At least four tornadoes hit the San Antonio area during a scary storm on Sunday night. Amazingly, no one was hurt, according to the San Antonio Express-News, but San Antonians were understandably spooked. “It was raining inside the house,” one Northside resident said. “It was insane.” The National Weather Service rated the first two tornadoes EF-1, with wind speeds reaching up to 105 miles per hour, while the next two twisters were a mere EF-0 (while that’s the lowest rating on the Fujita scale for tornado intensity, it certainly isn’t anything to scoff at—winds for those last two were still as high as 70 miles per hour). Most San Antonians seemed to be caught off-guard, despite warnings and alerts. The tornadoes didn’t stick around for long, though they did spin long enough to cause serious damage, ripping off roofs, toppling trees and downing power lines. At one point during the storm, 84,000 people were without power. Residents and city crews were still cleaning up debris by Monday night, and Mayor Ivy Taylor declared the area a disaster zone, hoping to secure state and federal funds toward recovery. “It was a war zone here,” City Councilman Roberto Treviño told the Express-News, while surveying the damage in the Shearer Hills-Ridgeview neighborhood.

Wrestling With The Matter
Mack Beggs, a 17-year-old junior at Euless Trinity High School, won the girls Class 6A Region II wrestling championship over the weekend. Beggs, who identifies as male, went undefeated this season and is currently taking testosterone to transition from female to male. Not everyone is okay with that. According to the Dallas Morning News, Jim Baudhuin, an attorney and parent of a wrestler from Coppell, filed a lawsuit against the University Interscholastic League earlier this month arguing that Beggs should be suspended because of the testosterone treatment, claiming that allowing him to compete causes “imminent threat of bodily harm” to competitors. If given the choice, Beggs would compete against guys, but UIL rules limit him to wrestling only against girls. Baudhuin says his lawsuit is not about Beggs’s gender identity. “I respect that completely, and I think the coaches do,” Baudhuin told the Morning News. “All we’re saying is she [sic] is taking something that gives her an unfair advantage. It’s documented. It’s universal that it’s an unfair advantage.” Several of Beggs’s playoff opponents—including his championship match foe—forfeited. “Today was not about their students winning,” Nancy Beggs, Mack’s grandmother, told the Morning News after the championship. “Today was about bias, hatred and ignorance.”

Its Day In Court
It’s been nearly seven years since fifteen-year-old Sergio Hernandez was shot dead by a U.S. Border Patrol agent near El Paso, and his family is finally getting its day before the nation’s highest court. According to the Huffington Post, the U.S. Supreme Court will hear the case of Hernandez’s shooting today. At issue here is how far the constitution extends beyond U.S. borders, and to whom. Hernandez, a Mexican citizen, was unarmed when he was gunned down on the Mexican side of the El Paso-Ciudad Juárez border. Border Patrol agent Jesus Mesa Jr. shot him through the fence. Mexican authorities indicted Mesa for murder, but the U.S. refused to extradite him. Hernandez’s family has attempted to seek justice through the courts on our side of the border, though they’ve had little success, taking a serpentine path that has eventually lead to today’s SCOTUS hearing, which will determine whether or not Hernandez’s family can sue Mesa in an American court and maybe get some sort relief. The bigger picture here, of course, is that this case could determine whether the border remains a de facto “no man’s land,” and whether federal agents can be held completely accountable for their actions in cross-border zones.

Call him CEO and keep his briefings no longer than two pages: inside Rex Tillerson’s State Department Reuters