—Deadspin to Ted Cruz, via Twitter. After Cruz announced that he would be planning a weekly basketball game in a Senate office building, the sports site wanted proof that the senator could ball. Cruz responded by tweeting a picture of Grayson Allen, a Duke basketball player that bears an uncanny resemblance to the former presidential candidate. Deadspin was not amused. 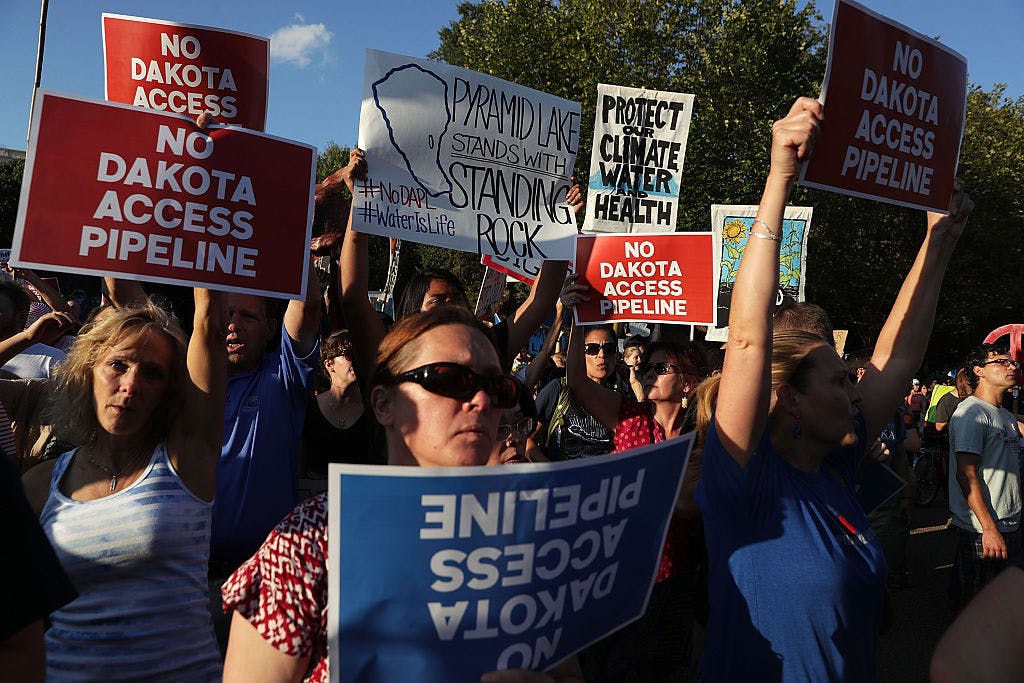 Reversal Of Fortunes
In a major blow to environmentalists, the efforts of thousands of protesters, and the legacy of former President Barack Obama, President Donald Trump signed an executive order (full text available here) on Tuesday that could potentially allow Dallas-based company Energy Transfer Partners to complete its controversial Dakota Access Pipeline, according to the Washington Post. The company still has 1,100 feet left of its 1,172-mile pipeline route that runs partly under North Dakota’s Lake Oahe, which is a main water supply for the nearby Standing Rock Sioux Tribe. The original pipeline plan drew thousands of protesters who camped out along the construction site, braving freezing temperatures and frequently facing use of force by law enforcement. In December, the Army Corps of Engineers announced it would not grant approval of an easement that would allow the pipeline to run below the lake, and would explore alternate routes instead. It’s important to note that Trump’s order seems to green-light the pipeline but is also pretty vague, as it appears to simply direct the Corps of Engineers to “review and approve in an expedited manner, to the extent permitted by law… requests for approvals to construct and operate the [pipeline].” Trump has had significant financial ties to Energy Transfer Partners. The company’s CEO, Kelcy Warren, donated more than $100,000 to Trump’s 2016 campaign, and Trump once owned up to $1 million worth of stock in the company before he supposedly divested last summer (as the New York Times notes, Trump’s most recent Federal Election Commission filing lists the investments—Trump has not provided any documentation to back up his divestment claim, and there is no other way to verify that he has actually dumped his investments). Trump’s pick for energy secretary, Rick Perry, also had financial ties to Energy Transfer Partners—he owned $154,000 worth of partnership units in the company and served on its board for about a year before reportedly divesting and stepping down earlier this month.

By The Numbers
A new study published by the University of Texas at Austin reveals some pretty striking statistics about human trafficking in Texas, according to the Austin American-Statesman (you can read the full study here). The study says there are at least 313,000 human trafficking victims in the Lone Star State. About 79,000 youths are victims of sex trafficking, and about 234,000 workers in Texas are victims of labor trafficking. Still, the study conceded that these numbers are a “conservative understatement.” The study also calculated the financial cost. Apparently traffickers ripped off $600 million from Texas’s victims of labor trafficking in at-risk industries, including “migrant farm work, construction, kitchen workers in restaurants, and landscaping services.” And an astounding $6.6 billion is spent in Texas on providing care to victims and survivors child sex trafficking. Young people who are homeless or in foster care have the highest risk of being coerced by traffickers into sex work.

Bugging Out
The Tim Curry Criminal Justice Center at the Tarrant County Courthouse has for the past month been reluctantly playing host to the most unwelcome of all houseguests: bed bugs. According to the Fort Worth Star-Telegram, the blood-sucking crawlers invaded sometime before January 6, when they were first discovered on the second floor of the building after two employees in the district attorney’s office were bitten in a grand jury room. Three chairs were found to be infested. They were quickly thrown away, along with some cloth table aprons. Pest control workers bug bombed the room twice (they don’t mess around, man) and treated the rest of the floor as well as the floors immediately above and below the infested site. “We thought that’d take care of it—but then a week later or so, we found one bug across the hall,” Tarrant County facilities director David Phillips told WFAA. “Since then, we’ve kind of gone ballistic on them.” According to WFAA, one of the bug-bitten employees even had their house fumigated. Gotta do what you gotta do. Apparently, this is the first Tarrant County building to have ever had bed bugs in its 26-year history.

Fat Lip
An East Texas judge made an offensive remark about the Women’s March on Washington on Monday, then quickly doubled down on the comment, according to the Dallas Morning News. “Just think about this,” Judge Bailey Moseley, who serves on Texas’ Sixth Court of Appeals in Texarkana, wrote on his Facebook page on Monday. “After just one day in office, Trump managed to achieve something that no one else has been able to do: he got a million fat women out walking.” Moseley deleted the post, but he turned up again later with even more thoughts on women, responding to a commenter that the post’s deletion was “likely a mistake” (sure it was, buddy). “I think the march of last Saturday was nothing more than a hissy fit with no defined purpose,” he wrote. As the Morning News pointed out, Moseley’s campaign website claims he is “known for his strong integrity.” Moseley has now apparently deactivated his Facebook account. It’s probably for the best.