“I pledge to every citizen of our land that I will be president for all Americans.”

—President-elect Donald Trump during his victory speech before a crowd of supporters in New York City Tuesday night, according to the New York Times. 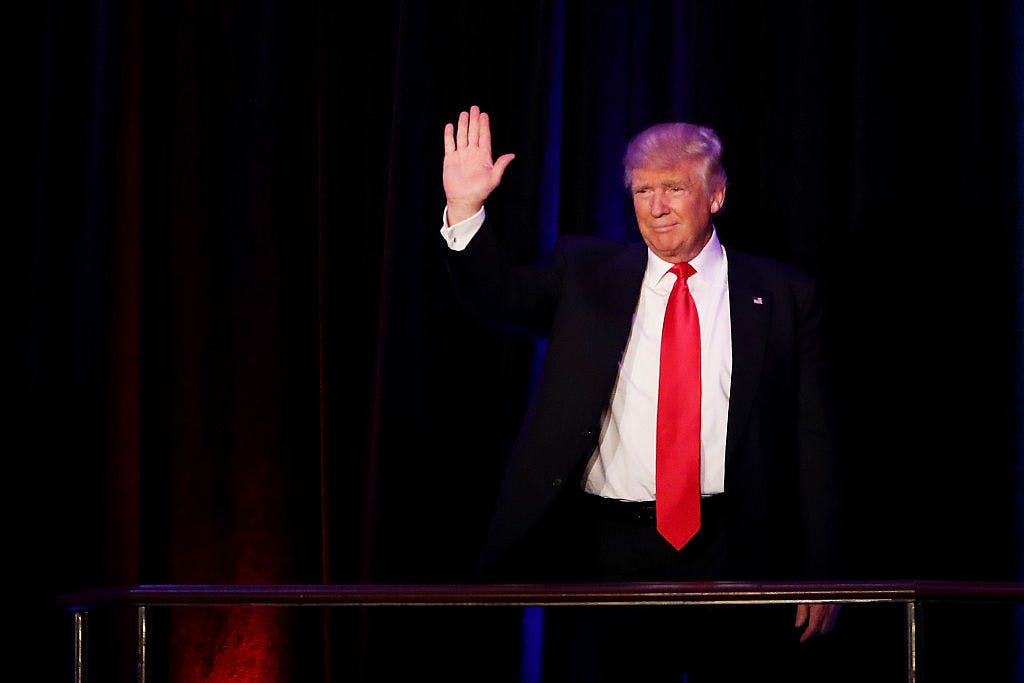 Trumped
Donald Trump is the president-elect of the United States. On Tuesday, the nation—and the state of Texas—elected a candidate with no military experience and no experience in government. That much is true; so is the fact that Trump rallied a voter base to defy all odds and upend everything political observers thought that they knew about politics. Trump was right. The pre-Election Day polls were wrong, both in Texas and across the country. Texas did not go blue, a possibility which was indicated by polls as late as last week, though Trump did not meet the historical Republican standard here in Texas. Trump garnered 52 percent of the vote in Texas, beating Clinton by just eight percentage points, the smallest margin the state has seen in decades. Despite fears that Texas would be an absolute mess on Election Day, things for the most part proceeded without a hitch. There were a few instances of long lines and confusion over polling locations and the voter ID law, but there were hardly any reported cases of voter intimidation, and things really went quite smoothly throughout the state. Still, people just about everywhere are unhappy: they are unhappy, which is why they voted for Trump; they are unhappy, now, because Trump was voted for. We are a deeply divided country, and it remains to be seen if we can repair that divide. Regardless who you voted for, one thing you can and should do this morning and every morning after that is wake up, take a deep breath, and try your hardest to respect others, to be honest, and to do good in the world.

Cop Out
George W. Bush voted on Tuesday, but he did not cast his ballot for president. According to the Texas Tribune, Bush and his wife, Laura, left a pretty important part of their ballots blank. “They didn’t vote for Hillary; they didn’t vote for Trump,” Bush spokesman Freddy Ford told the Tribune in an email. The Bush clan has been fairly divided over this presidential race, with rumors circulating within the past few months that George W. and his father, George H.W., would be voting for Democratic candidate Hillary Clinton. Meanwhile, failed presidential candidate Jeb Bush said he would be voting for neither Clinton nor Republican Donald Trump, and Texas Land Commissioner George P. Bush has been actively stumping for Trump. It’s unclear what direction H.W. ultimately decided to go with his ballot. “We are not commenting on the presidential race,” Jim McGrath, a spokesman for H.W., told the Tribune in an email.

Good News Bears?
Looks like Baylor won’t face the worst of the National Collegiate Athletic Association’s wrath. According to the Wall Street Journal, the NCAA has no plans to “bring the hammer down” on Baylor the way it did on Penn State, meaning the university won’t face harsh punishment related to its sexual assault scandal. The news followed a particularly rocky week in the scandal that has engulfed the university. As the Journal notes, the Penn State scandal was believed to be an indicator of how the NCAA would handle Baylor—in that case, Jerry Sandusky, a former assistant coach for the Nittany Lions, was convicted of sexually molesting young boys over a fifteen-year period, and the NCAA responded by vacating more than 100 wins, barring the team from bowl games for four years, stripping scholarships, and issuing a $60 million fine toward fighting child abuse (those sanctions have since been reduced).

Texas’s Lil’ Sebastian
Here’s your cute animal post-election palette cleanser: a miniature horse was found roaming the streets of downtown Conroe, just outside of Houston, on Tuesday afternoon. According to the Houston Chronicle, local police managed to wrangle the little guy after a short (pun absolutely intended) foot chase through the streets of downtown Conroe, herding the horse into a pen near a plumbing business. The commotion apparently startled and worried the staff of the plumbing business. “I looked in the mirror and saw three guys running [down Main Street],” Clayton Lee Plumbing employee Devin Boyd told the Chronicle. “I ran out and saw the cops and thought ‘oh man, they have a [suspect] back there.’ That’s when I came back out and saw the horse.” It’s unclear what, exactly, happened to the horse after police caught up to it. But, hey, if you’re missing a tiny horse, let the Conroe Police Department know as soon as possible, OK?

A man was arrested in Fort Bend County for trying to vote twice, claiming he was testing the system for Trump KTRK