“It was pretty clear to everybody that there was just really no way they were going to get that thing all the way up the hill to South Congress.”

—Mike Hollis to KVUE. Hollis, a resident near East Live Oak in South Austin, was apparently not shocked then when a moving company attempting to transport a vacant home got stuck right in the middle of the street. So now there’s just a house sitting in the street, basically keeping Austin weird all on its own. It’s expected to be there for a few days until it can be successfully extricated. 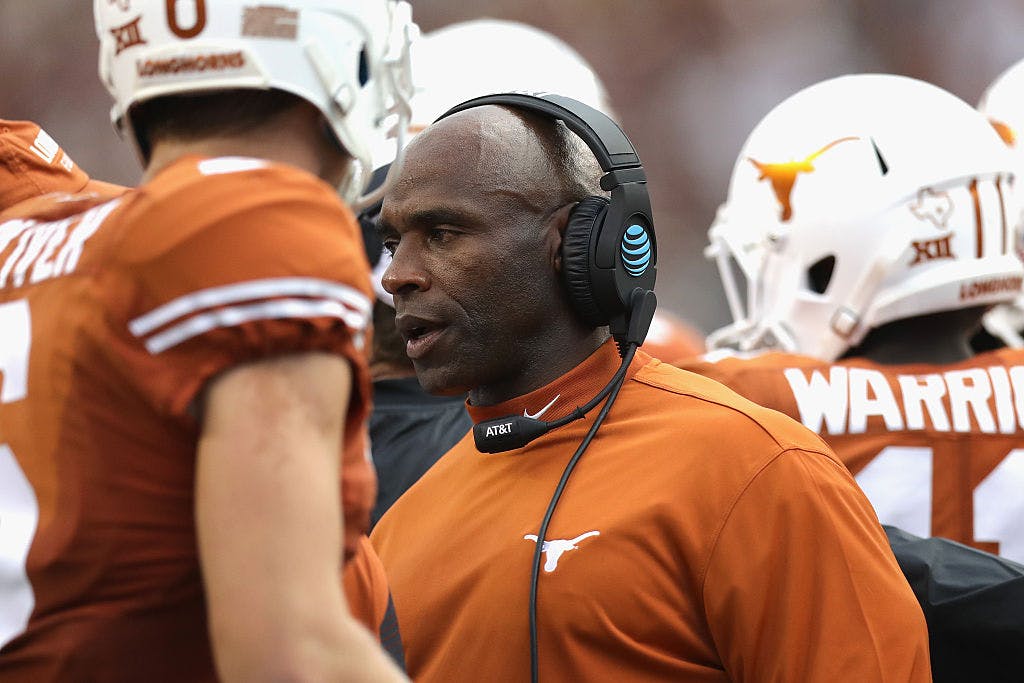 Charlie Wrong
It looked like Texas Longhorns football was back on track after a thrilling 50-47 upset win in double-overtime against Notre Dame in the season opener, but the Longhorns have dropped two out of three games since then, all against teams that they were expected to beat. They’ve given up a combined total of nearly 100 points in those two losses, which is definitely not good (and neither is Notre Dame, as it would turn out). Anyway, it’s been a while since the Longhorns actually had a good season, and it seems like Saturday’s 49-31 loss to Oklahoma State has reignited chatter about coach Charlie Strong’s future. After the game, Texas Athletic Director Mike Perrin said he’d “evaluate what happened here,” later explaining to ESPN that “I’m not evaluating Charlie, per se. I’m evaluating everything.” An anonymous source also told ESPN that Strong would at least not be fired during the season, adding that the upcoming rivalry game against Oklahoma is a pretty big one in terms of determining Strong’s future, but the game is not quite a do-or-die situation. The source also said that it’s more likely that the defensive coaching staff would be axed so Strong can stick around next year. Changes seem to be underway already: Strong apparently demoted defensive coordinator Vance Bedford and has taken control of the defense for the rest of the season, the Austin American-Statesman reported. Meanwhile, a “high-ranking Texas official” told Sports Illustrated on Sunday night that Strong is “very close” to being canned after the season, and that part of the reason he’ll make it through 2016 is simply because there’s no one on the coaching staff right now who would be fit to take Strong’s place.

No Refuge
Governor Greg Abbott announced on Friday that the state had officially withdrawn from the federal refugee resettlement program, according to the Texas Tribune. Abbott had threatened to withdraw a few weeks earlier in a letter he sent to the federal government, requesting the program guarantee that it only send Texas refugees who are “certified” to not be a “security threat.” Of course, the move doesn’t make much of a difference because states don’t actually get to determine whether they receive refugees. Pretty much nothing will change. The feds can get around the state’s refusal to cooperate by just working directly with the non-profit groups tasked with resettling refugees. “Refugees will continue to be resettled in Texas only after extensive screenings are conducted by the State Department and Department of Homeland Security,” a spokesman for the Office of Refugee Resettlement told the Tribune. Meanwhile, there’s been a surge in resettlement activity here since Texas threatened to close its doors to Syrian refugees late last year. According to the Tribune, non-profits are seeing sizable increases in volunteers and donations benefiting their resettlement services.

Computer Crash
It didn’t take long for Texas to lose its fight to stop the federal government from relinquishing its role of overseeing the non-profit that regulates Internet domain names. Attorney General Ken Paxton filed a lawsuit to stop the transfer last week, and a judge kicked it out of court on Friday after determining that there wasn’t enough evidence the move would actually cause harm, according to the Houston Chronicle. On Saturday the feds officially handed over control of ICANN, the non-profit that controls domain names, to private global players, signaling the final nail in the coffin for Texas’s fight. The lawsuit included a handful of other states, but the battle was clearly led by Texas. Senator Ted Cruz had made blocking the move a priority, but he failed after his colleagues left his suggested provision to halt the transfer out of a recent spending bill, leaving Paxton to pick up the fight. Both Cruz and Paxton had said that they believed the transfer would be bad for free speech, and that it’d give “authoritarian regimes” the ability to control the Internet. But tech experts dismissed that concern, according to the Dallas Morning News.

Not Funny
Creepy clowns are (supposedly) popping up across the country, and the Pagliacci paranoia has now apparently reached Texas. Great. For those of you unfamiliar with the criminal clown concept, here’s how it goes: someone somewhere reports to the police that they saw someone dressed as a clown creeping around their yard, or something similar. That story gets traction in the national news, because clowns are weird, fascinating, and inherently creepy. Copycats follow. The current clown craze began in August in South Carolina, where kids told adults that a group of clowns were trying to lure them into the woods, and now clown copycats/wolf-criers have recently shown up all across Texas. Four school districts in Waco increased security last week after a post surfaced on social media stating the user’s intent to “kill everybody” at Waco High School and an unspecified university, along with a picture of a clown with a knife. Also last week, someone using an Instagram account called “Ain’t Clownin Around” threatened to kidnap students and shoot teachers at Houston-area high schools. Similar clown-related threats were made in Corpus Christi last week, while in Longview, someone called the cops to report a clown lurking around town (police never found the alleged clown). What a circus.