The nerds have left town, and the film buffs are still holed up in darkened theaters, which leaves Austin’s streets vulnerable to the most raucous of SXSW’s three big conferences: music. Though interactive has overtaken music in terms of attendance (in 2015, music had 30,308 registrants to interactive’s 33,825), there is still something about the spirit of the final conference—which runs from Tuesday through this Sunday—that makes it feel much more massive.

Although Tuesday is the official start of the music conference, Wednesday is when the real action gets underway. The Texas Monthly SXSW team scattered in all directions to see folk-rock stalwarts, hometown heroes, and poppy goodness. 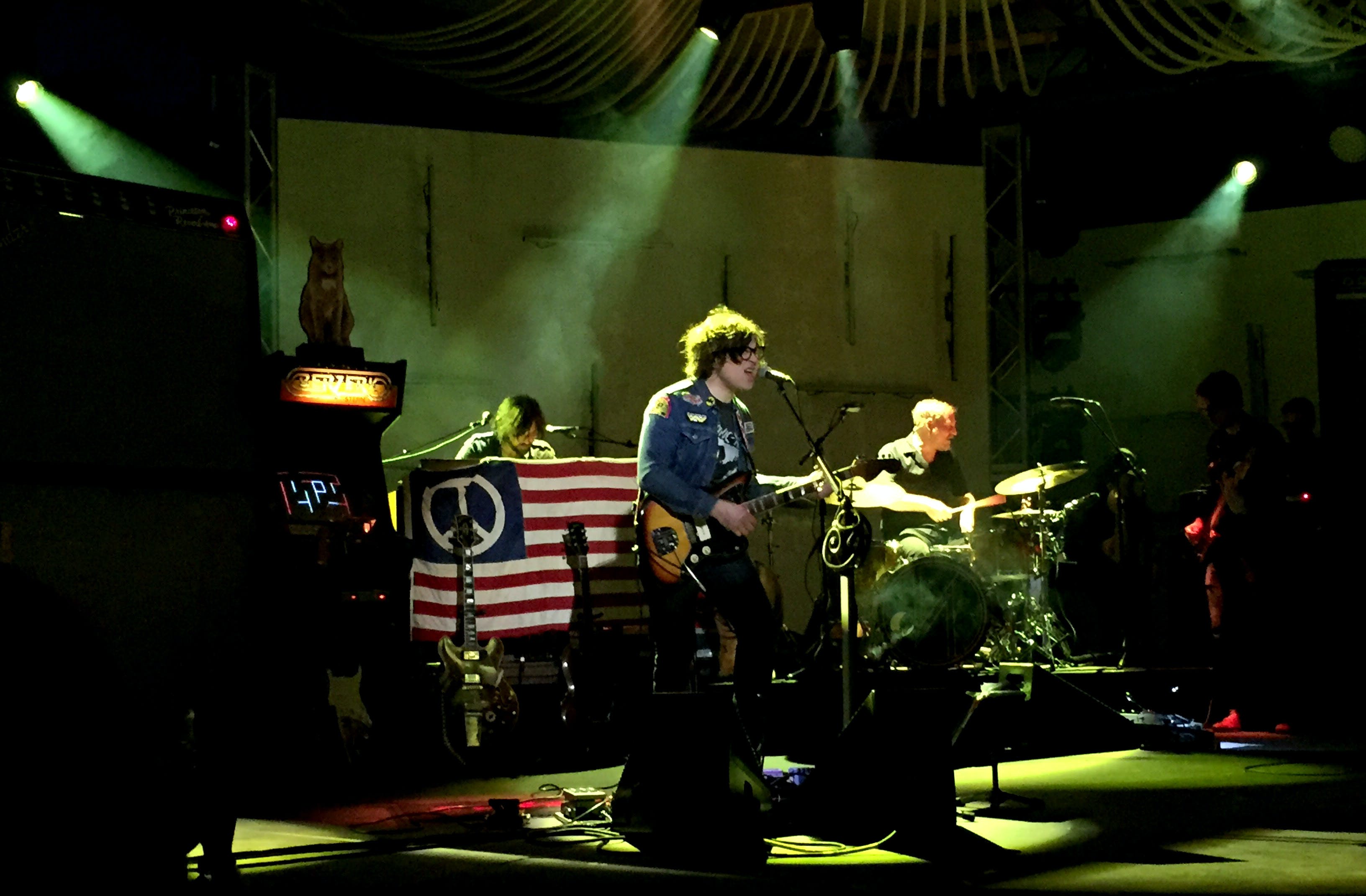 Ryan Adams’s most recent album may have been a surprisingly spry front-to-back cover of Taylor Swift’s 1989, but he kept his hands off the catalog of America’s pop princess for his headlining slot at the Universal Records showcase at the JW Marriott on Wednesday.

Instead, he focued on an array of hits and deep cuts from all of the other phases of his career—his catalog from the late aughts and the earlier part of this decade got a heavy workout in the first part of the set, dropping tracks like “Gimme Something Good” and “Let It Ride” at the start, as well as a blistering take on the Stones-esque “Dirty Rain,” before shifting gears for the Gold-era b-side “Dear Chicago” (which was eventually released on 2003’s Demolition), which is one of the prettier songs ever to feature the line “I’ve been thinking some of suicide.”

Despite insisting that “the crowd-pleasing Ryan Adams set is in some other hotel,” Adams did visit the parts of his discography that made him famous. He strapped on an acoustic guitar for a quiet, solo rendition of “My Winding Wheel,” from his 2000 solo debut Heartbreaker, and donned a harmonica for his breakthrough single “New York, New York.” He had cool rock star moments: Too cool for SXSW, he let the band jam a few chords for a minute, “until you guys are done networking,” and later in his set he made fun of a guy at the front for a jacket covered in cats (“there’s no way you’re getting out of here with that jacket,” Adams insisted, at which point the fan took it off and gave it to him). The set concluded its nearly 90 minute tour through Adams’s entire solo career (he never touched any of his Whiskeytown material, alas) a little after 11 in the evening. (And not to worry—he gave the jacket back.) 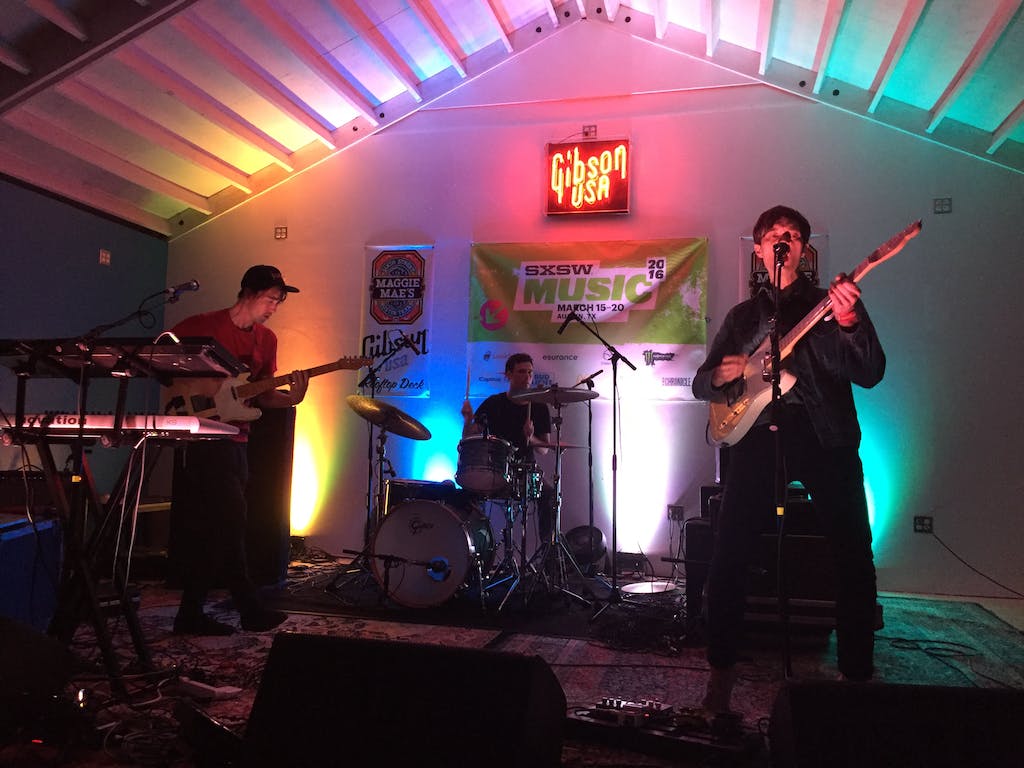 POP ETC’s short show at Maggie Mae’s had rough start—they performed one song before missing about ten minutes of performance time trying to fix the sound. To soothe the situation, lead singer Chris Chu and drummer Jonathan Harmon performed a stripped down version of “Excuses,” their breakout single from the Big Echo album from their days as The Morning Benders. (The band changed their name to POP ETC in 2010 to after finding out “benders” was a derisive term for LGBT people in Europe).

After “Excuses” the band dove into songs off their latest album, Souvenir, ending on a high note with “What Am I Becoming” and “Running in Circles.” The energy of the show was a bit off, with the sound problems and the audience standing no closer than five feet to the stage (possibly because a lot of feedback in the beginning), but the band tried their best to make up for it. It was a rough show, but the high points showed promise. 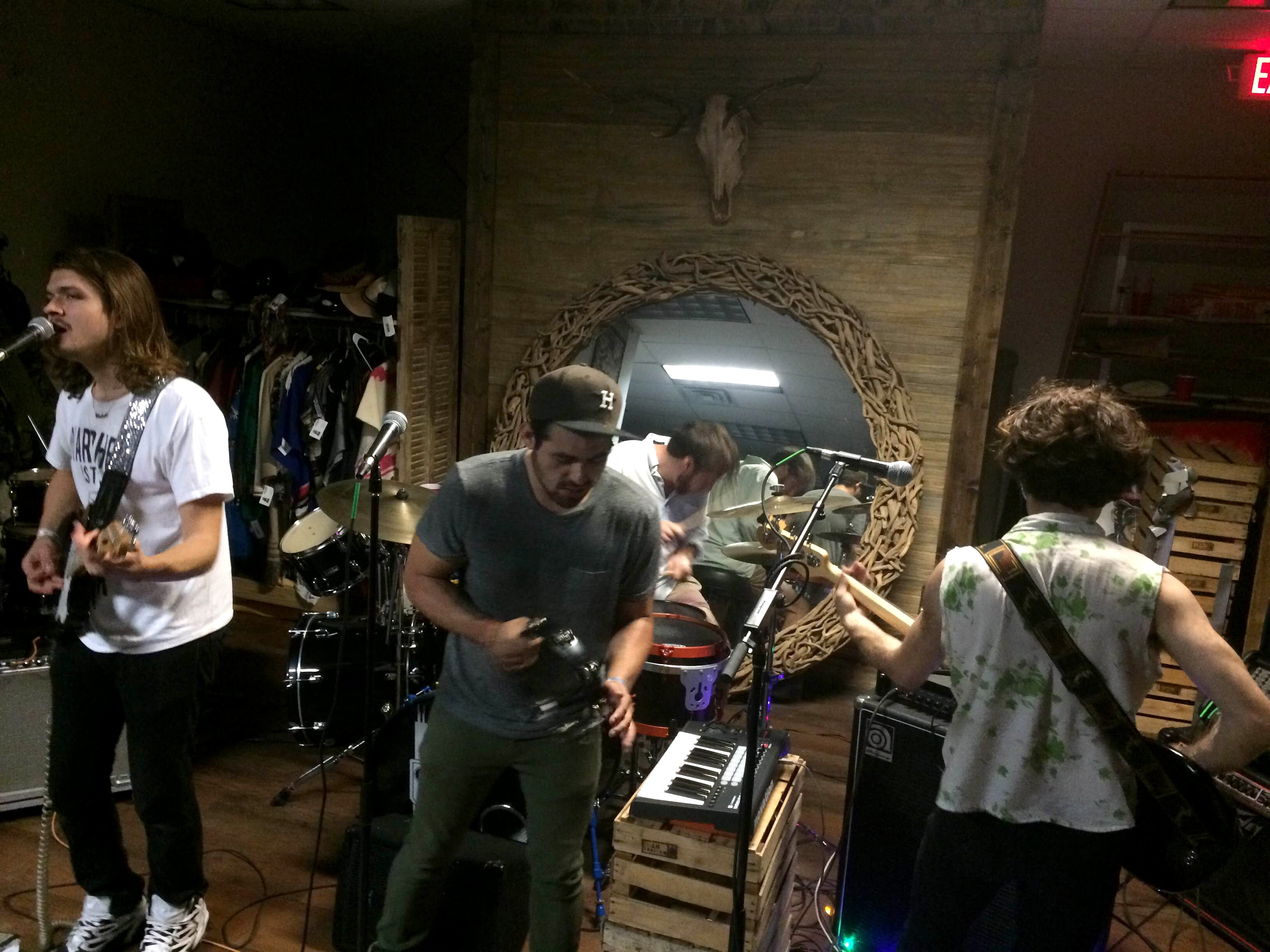 After a week of free booze, tiny finger foods, and faux lounge set-ups, the soirée aspect of SXSW starts getting old. There’s something about the excess surrounding SXSW Interactive and the more exclusive bits of the music conference that becons you back to basics (you know, after you’ve loaded up on all of the crostini that you can take in one day). So Wednesday evening we were driven out of the downtown fold and landed near the UT campus at Monkies Vintage, which had—like every other building in Austin—been turned into a temporary venue for the night.

Instead of finger foods there was Domino’s pizza. There was still free booze, but the beer came from a keg instead of a tap. And there was absolutely no badge line or guest list to speak of. So no one had to wait to hear the hard-driving whiplash of Austin four-piece the Delicate Boys. Surrounded by vintage boots, the Delicate Boys—who are, as you might of guessed, anything but—ripped through a series of bangers that were fueled by gritty guitar solos, pummeled drumming, hip-shaking bass lines, and the occasional air horn. Because why can’t rock have air horns, right?

In a way, it was a welcome return to normalcy. It gave locals a chance to see the music that they come out for every week, and hopefully gave out-of-towners a chance to see what the Austin music scene looks like after the big name acts and catering are gone. 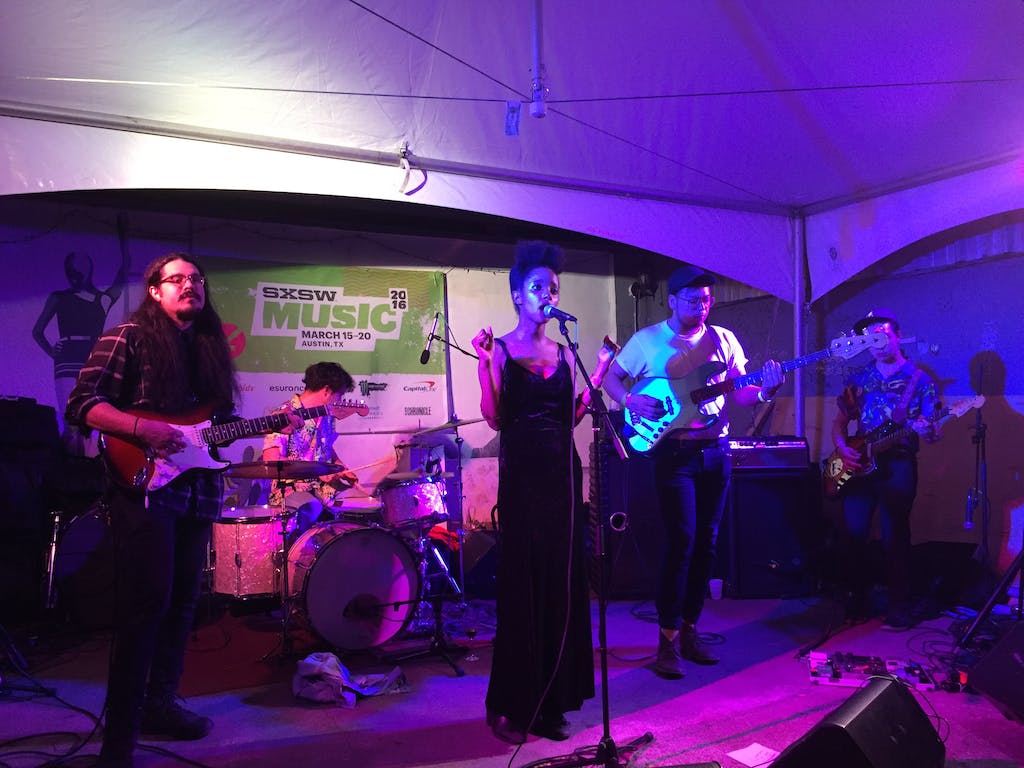 The backyard stage at Swan Dive proved to be a fitting location for Houston-based band The Tontons. Lead singer Asli Omar’s voice and presence on stage is enough to get the attention of even the casual bar-goer on the other side of the Swan Dive’s shared backyard with Barbarella. Omar punctuates her vocals with small, controlled dance moves that you’d think would get distracting, but never actually do.

Omar’s voice is both powerful and sultry, and its sound over Tom Nguyen’s bass and Justin Martinez’s drums are enough encouragement to get people moving. Their show managed to be both intimate and personal while loud and danceable. The Tontons have a way of captivating the audience that keeps you coming back. 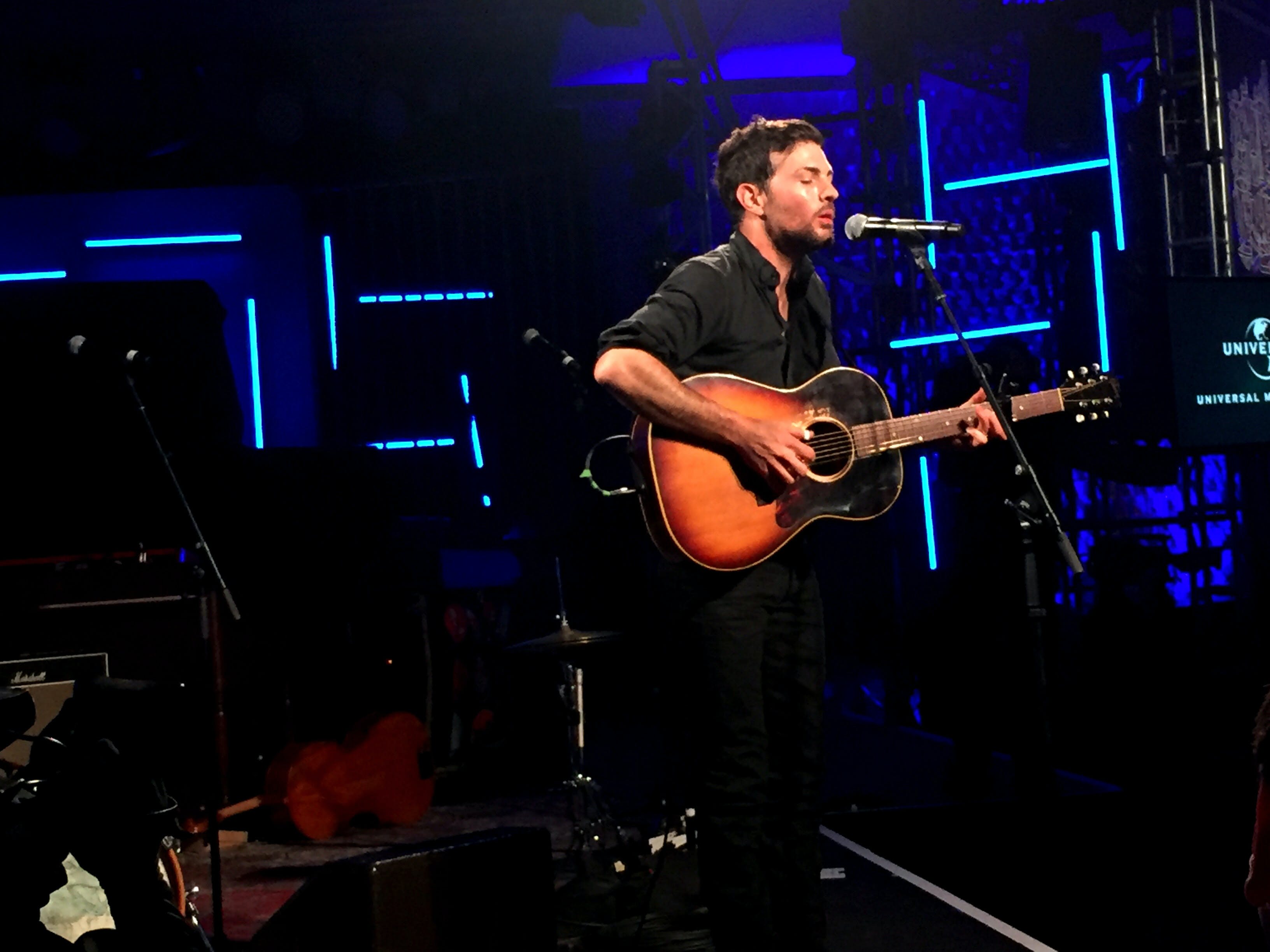 Cowpunk may have died a long time ago, but bands who like to jam out on banjos, fiddles, upright bass, and kazoos(!!) still have their niche, and if you fit into it, the Avett Brothers are here for you. The band, playing at a seemingly incongruous-but-entirely-SXSW appropriate venue—the third floor ballroom of the JW Marriott—delighted a packed crowd that wanted to hoot and holler as singer Scott Avett opined things like “you know I did, mama” after the choruses on “Talk On Indolence.”

Fellow Avett Bro Seth brought things down a notch for twangy spins through new songs from the band’s forthcoming album, which is out in June, like “Divorce And Separation Blues,” which wear the George Jones influence so fully on the sleeve that he literally drops a “yodel-ay-hee odee odee” in the chorus. In other words, it was the Avetts doing what they do —a little bit of pastiche, a lot of rolickin’, and plenty to stomp along with.