There are plenty of ways to flaunt your wealth. You could buy a Bentley! You could purchase a one-of-a-kind, for-your-ears-only Wu Tang Clan album, and then release a video threatening members of the group you just gave $2 million! You could run for president of the United States, proudly declaring your ability to shoot someone and still keep all of your votes! But the best way to show off how friggin’ rich you are—no matter how rich that is—is with your house. For most people, their house is the most expensive purchase they’ll ever make, and that’s true whether they bought it for $80,000 in Weslaco or for a hundred million bucks in the South of France.

Still, when looking the rarefied properties sought after by the wealthiest of wealthy homebuyers, you don’t have to cross an ocean. There are plenty of mid-eight figure houses on the market right now here in Texas. And thanks to the folks at real estate portal Point2 Homes, we have a list of the ten most expensive to sift through. Whether you like these lists because they reassure you that $50,000,000 really can’t buy happiness, or because you dream of one day having a house with an elevator, it’s fun to see what tens of millions of dollars can net you in real estate. 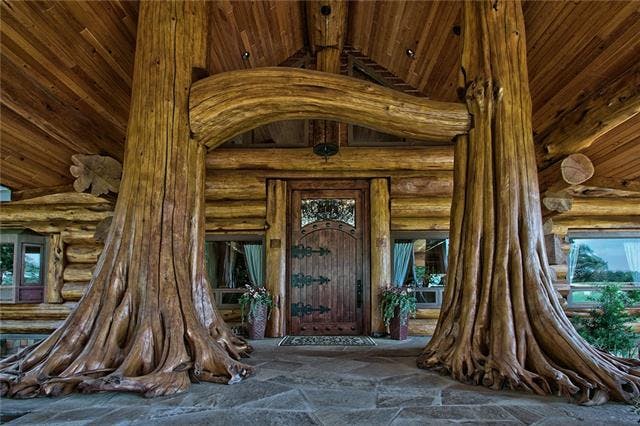 Southlake, the Tarrant County suburb near the Grapevine Lake, is a small community of just under 30,000 people. That’s just under 30,000 people who will say things like, “Holy cow, is your door really flanked by two giant tree trunks?” and “Man, this is one wacky looking wooden house!” when they see your new abode. The most expensive house in Texas is a $50,000,000 place that combines the rustic charms of a log cabin with the square footage of a small Walmart. At nearly 9,00- square feet, the property on Dove Road seems to favor open spaces to an unnecessary number of rooms: at the very least, the 3 bedroom, 3.5 bathroom house opts not to cram the home full of sleeping spots that will never be used. While $50,000,000 is an awful lot of money (more than twelve times what Deion Sanders’s massive property sold for!), can you put a price tag on design touches like an all-wood-and-wrought-iron interior? Actually, yes, you can—and that price tag is $50,000,000. 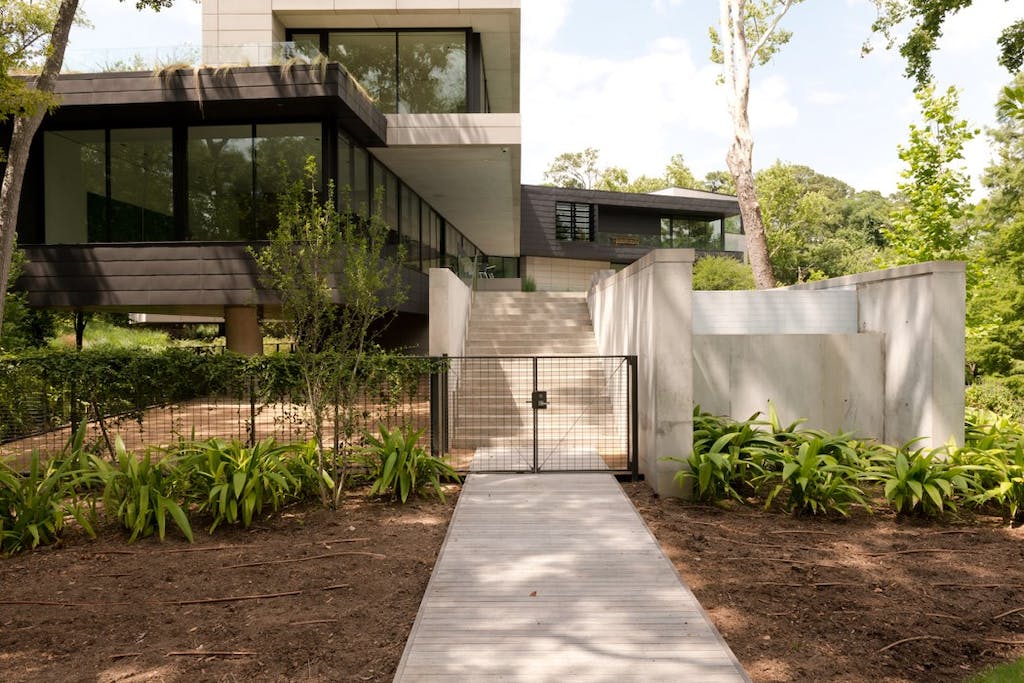 Although the house on Mott Lane is outside of the loop, it boasts an address in Houston proper. That’s impressive, because the 14,868-square feet is a relative bargain at $35 million—at least compared to the house in Southlake, which is stuck in the ‘burbs and 6,000-square feet smaller. It also replaces the ornate-yet-faux-rustic styling with a sleek industrial edge: the marketing copy describes it as an “estate of steel, concrete, zinc, and glass.” Those are four great tastes that go even better together, and they make the house on Mott Lane perfect for storing your giant statue of Buddha or gazing out the floor-to-ceiling windows onto the dead grass outside. The contemporary efficiency of the giant space captures the museum-like feel of the home—but it’s a museum with its own theater, as the “meticulously designed acoustics” in the media room come with a retractable wall, so you can expand or contract the amount of space you have available depending on who you want to invite over to watch the Rockets game. Talk about a win/win/win for a mere $35,000,000. 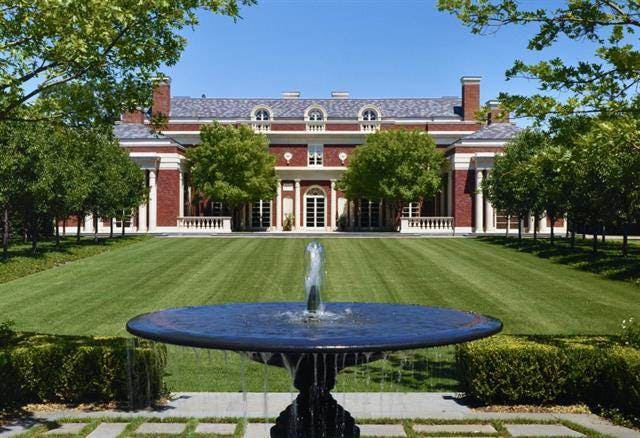 If you’re the sort of person who’s got $33,5000,000 to drop on a house, you could also very likely be the sort of person who pals around with ex-presidents. That makes the property on Deloache Avenue in the North Dallas neighborhood of Preston Hollow downright convenient: You’re less than two miles from your buddy George W. Bush’s place! Feel free to invite the guy over to enjoy your nine acre estate. Y’all can go fishing in your private lake, enjoy a relaxed lunch in one of the many terraces and gardens, get blood pumping with a game on the tennis court, cool off in the pool (unless it’s raining—in which case you’ll have to go inside and use your own personal natatorium!), and then settle in for cigars in the leather-walled billiard room. (If you get bored with all of that, the 15,254-square-foot, three-story property—not to mention the two-story guest house—could be a great setting for a truly epic game of hide-and-seek!) Although the exterior of the property looks something like the law building of an elite East Coast university, if you pony up the $33,500,000 to own it, you can use it for whatever you want. 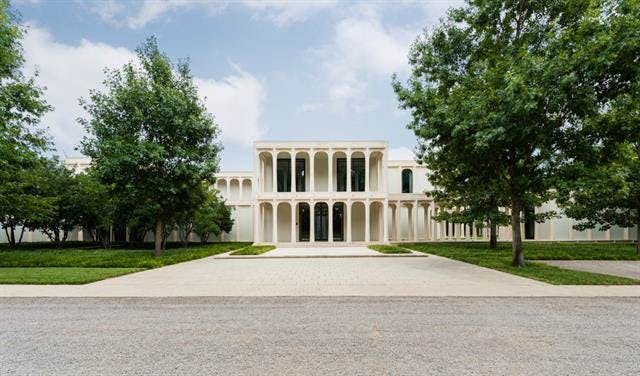 If you want to stay in Preston Hollow, but you think $33,500,000 is just a crazy amount of money to spend on a house, don’t worry: Just two miles west of Deloache Avenue, on the other side of the North Texas Tollway, is 10210 Strait Lane, which comes in at a far more sensible $27,500,000 for its 11,387-square feet. It’s still got five bedrooms, seven full bathrooms, and four partial bathrooms, and its columned architecture is distinctly more modern than its more expensive neighbor a few miles to the east. (Plus, at a mere two stories, think of all the money you’ll save not having to power the elevator!) Ultimately, when dealing with neighboring properties like these, it’s a matter of taste: Those who prefer a more active lifestyle may crave the tennis courts and indoor/outdoor pools of Deloache; those who enjoy the opportunity to sit around and be entertained can kick it on Strait Lane and enjoy the entirely separate media house, or sit under any of the 300 trees on the property to read a good book. Also, it has a tennis court and a pool, so what are you really missing besides the extra 4,000-square feet you wouldn’t ever use anyway?

For the most part, those looking to spend a truly offensive amount of money on a single house are going to do it in Dallas or Houston. But there is one property in the state’s capital that cracks the top ten, and it’s the house on Crystal Mountain Drive. Sotheby’s notes that it’s the largest house available close to downtown Austin, though “close” is relative—it’s more than eleven miles from the State Capitol, or roughly three hours in traffic. The $25,000,000 doesn’t just get you (relative) location, though—though its 6,588-square feet may seem paltry compared to the Preston Hollow palaces, if you’re looking to live in Austin, you’re probably a more iconoclastic gazillionaire, excited to enjoy the views of Barton Creek and the fishing/swimming/kayaking/hiking/biking/horseback riding opportunities provided by the 128+ acre property in the outskirts of Austin. Also, as you undoubtedly guessed: tennis court!

Here’s the thing about a house with its own private tennis court: You have to think about maintaining your tennis court. Even if that’s just paying somebody to keep it clean, that’s a conscious thought you have to have at some point in your life. You didn’t earn yourself a net worth big enough to buy a house with a tennis court just to have to think about crap like that. So why not skip the acreage and property and just land yourself the sweetest penthouse condo in all of Texas? Over at 1918 N. Olive Street in Dallas—mere steps from the city’s Klyde Warren Park and in the heart of the Arts District—you can own the Museum Tower penthouse for just $24,000,000. While all the other rich homeowners are writing checks to whoever is mowing their massive lawns, you can literally look down on them, since you are 42 stories up in your 9,350-square-foot penthouse (or, if you’re feeling frisky, you’re 43 stories up on your 5,600-square-foot rooftop terrace). If you’re the sort of swingin’, freewheelin’ multi-millionaire on the go who can’t be tied down to all of that acreage, then Museum Tower penthouse is the only choice for you. 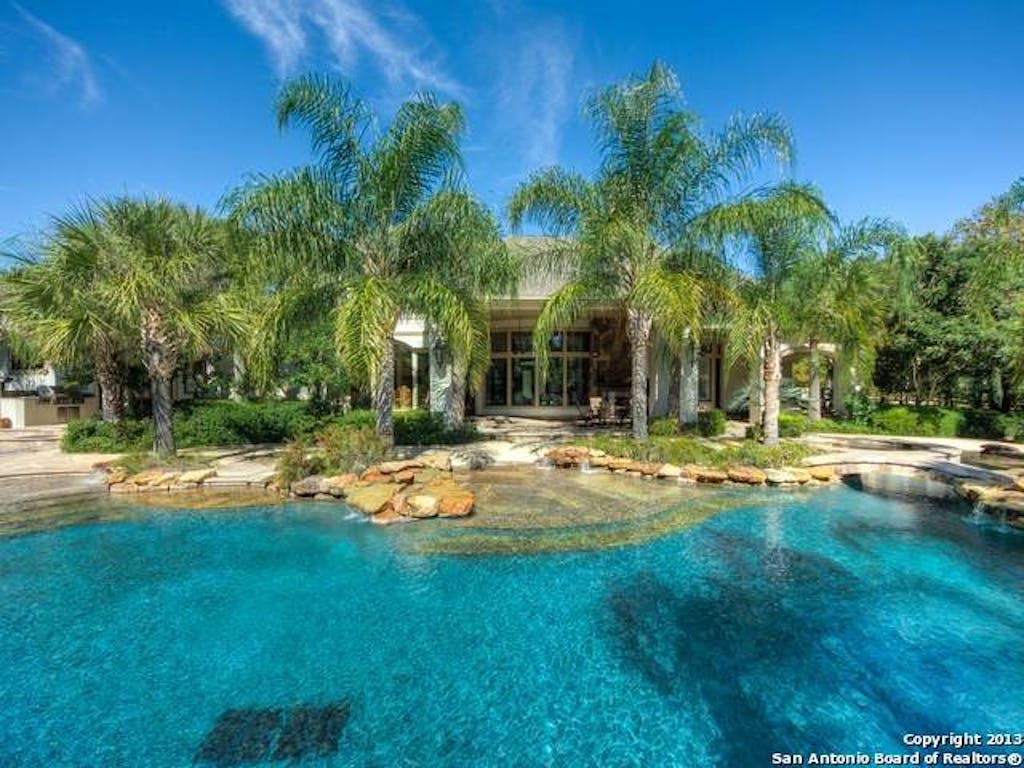 If you need a whole lot of acreage to accompany your extremely expensive, ridiculously fancy house, but you’d rather fly commercial than have to live with the hippies in Austin, fear not: Houston-based house-seekers can head out to Magnolia and nab themselves 185+ acres while remaining a mere 40-some miles from the city. Live out on the water—specifically your 25-acre “world class bass lake,” complete with ten islands—and enjoy the opportunity to see them all either by boat (property comes with a private boathouse) or on foot (property includes 21 bridges!). No sea legs? Fear not, you can kick it in your nine-acre Japanese garden or your seven-acre botanical garden, and breathe in the intoxicating aroma of the literally five thousand azaleas. Then, when you need to get into the city, take your hoverboard or Segway or whatever it is you use to get around this giant place over to the private lakeside helipad and catch a ride into Houston to conduct whatever kind of business you do that allows you to buy a $19 million house in the middle of nowhere. 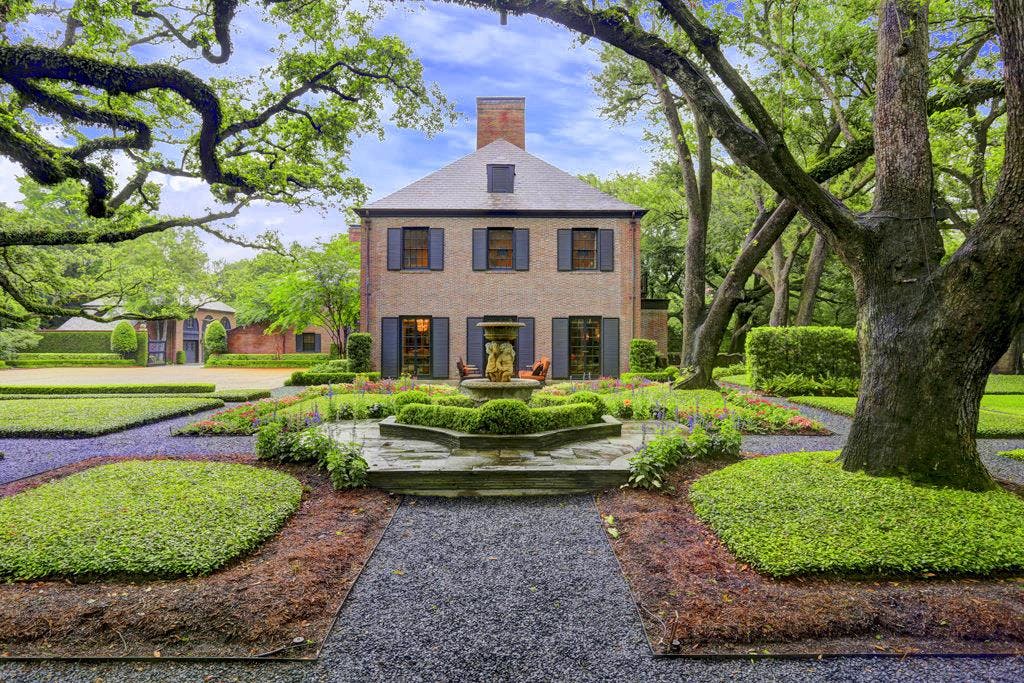 Okay, let’s say you have some specific criteria for a place to live: You need at least 12,000-square feet to be comfortable, you need to be in the heart of a major city’s museum district, you need eight bedrooms and bathrooms, but you’ve got no use for a tennis court. Oh, and your absolute ceiling is $20 million bucks. You won’t believe what we have in store for you: Over on Longfellow Lane in Houston, you can be mere steps away from the Houston Museum of Natural Science in the heart of the city, enjoy nearly two acres of outside space, get all your criteria met, and still come in two million dollars under budget. Truly, the world is a good and kind place. 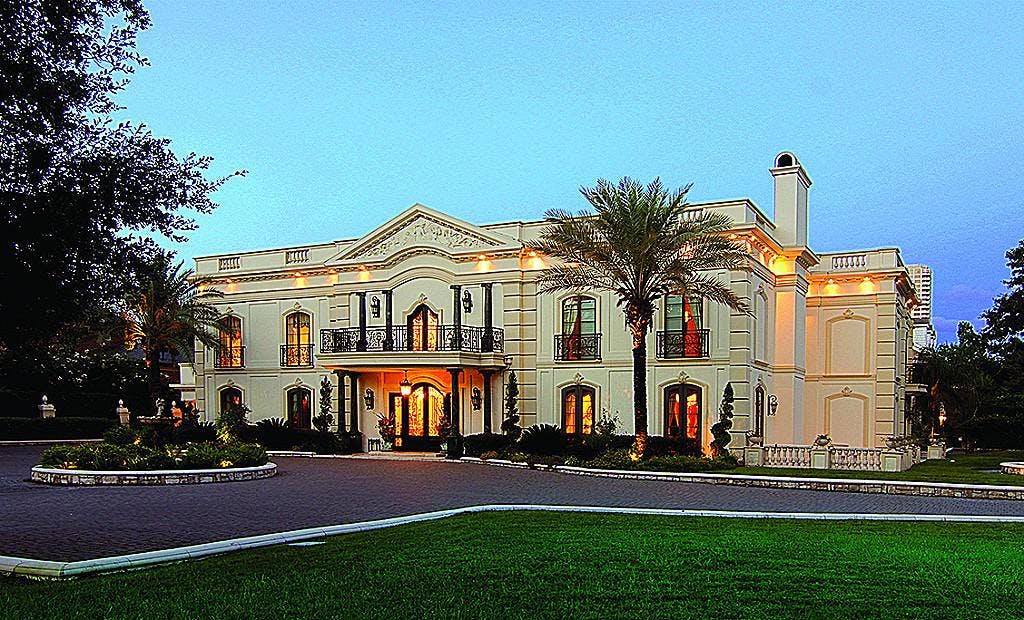 Much like when the Value Menu at McDonald’s prices everything at 99 cents, creating the psychological feeling that you’re spending less than a dollar, this exquisite central Houston property isn’t $18 million. Nope, it’s $17,900,000. That may not seem like much, but it’s actually one hundred thousand dollars you’re saving just because the listing agent didn’t want to scare you away. That’s free money, just yours for the taking, because you bought a place that had a clever listing agent. You got rich enough to be looking all the way down at number nine on this list by being smart, so keep your eyes peeled open even wider: This is a pretty nice house. It’s the second biggest on the entire list at 21,500-square feet, and though it doesn’t have even one private island, let alone the ten you can find at the magnolia property, it more than makes up for that with its abundance of marble flooring. Whoever built this place was seriously into marble: Floors, columns, staircases, countertops, it’s just marblepalooza up in here. Besides all of that, the centerpiece of the house is the 12,000-square-foot natatorium, so you can swim on hot and/or rainy days without having to worry about being too hot and/or wet. (And don’t you worry, the floors in that natatorium? Marble!!!) Truly, it’s a wonder that there is any marble left for anybody else’s house. But that’s not your problem, it’s theirs. Suckers.

Just because most of the crazy expensive properties in Texas are in Houston and Dallas doesn’t mean that there ain’t money getting spent in San Antonio. Indeed, though it’s the only one to crack the top ten, this 23,000-square-foot palace near the delightful Magnolia Pancake Haus and a pretty good Denny’s is the largest house on the entire list. What does your $17.5 million get you besides easy access to an Olive Garden? How’s an eight-car garage sound? How ’bout twelve friggin’ bedrooms? What about an underground wine cellar, or your own yoga room, or a 20-foot-tall rock wall on the exterior? How’s a 600-gallon fishtank sound, or your own private barbershop? A lake with a waterfall? You got it. You got everything. You’re right next to Denny’s and you have a lake with a waterfall. You are living the San Antonio dream. Congratulations to you, to me, to the planet earth. Life is so good right now.