It was a simpler time in 2011. Solange was still just Beyoncé’s little sister. Fans eagerly anticipated new material from Prince, David Bowie, and Leonard Cohen. The host of Celebrity Apprentice busied himself with tweeting about Barney Frank’s nipples. And the hip folks of Austin, enjoying themselves at that year’s edition of the now-defunct Fun Fun Fun Fest, acted like a bunch of yokels who had never seen a celebrity before when Ryan Gosling turned up at the festival.

A Tumblr blog dedicated to Gosling’s appearance at the festival was started to capture all of the pictures people took of and with the star. And he wasn’t alone in being there. He was joined by Val Kilmer, Rooney Mara, Michael Fassbender, and other actors. All of this came after similar appearances by members of that batch of stars at Austin City Limits, and before they’d reprise their appearances at more festivals in the year to come. Terrence Malick was with them, and it was clear that they were filming something with the reclusive director, but the details of that project had been scarce in the years that followed. It was believed that the film was called Weightless; last year, we learned that it ran 145 minutes in its first cut screened for the British Board of Film Classification, which gave it a 15 (an equivalent to an R rating). And that, besides the cast list, was really about all we knew.

Now, we finally have some more details: We know that the movie is called Song To Song, we know that it stars Gosling and Mara as struggling Austin musicians in love, Fassbender as an evil music producer, and Natalie Portman as “the waitress he ensnares,” according to IndieWire. (It sounds a little bit like Wayne’s World meets Closer when you put it like that.) It all apparently takes place in “a rock ‘n’ roll landscape of seduction and betrayal,” which sounds very Austin circa 2011. (In 2017, Austin musicians are too busy worrying how they’re gonna keep up with the rent to seduce or betray anybody.)

In addition to all of these details, we also know something else about the movie: it’s release date on March 17. That is a week after SXSW kicks off, which suggests that in advance of the theatrical release, it’ll probably play the Paramount as part of the festival—smart money would have it as the opening night film of the festival, given the setting, subject matter, and star power of the film. Here’s hoping that Tumblr blog revives in time for the baristas, waiters, and hotel staff of Austin to snap shots with Gosling as he rolls through town for the festival.

Either way, though, one of the long-simmering mysteries of Austin’s music and film culture—just what exactly was Terrence Malick doing with all of those famous, beautiful people at those music festivals half a decade ago?—finally gets resolved in two short months. 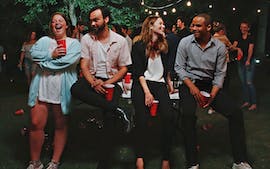