There’s been plenty of controversy over the proposed stadium deal between the Texas Rangers and the City of Arlington. Globe Life Park has been around 22 years, which makes it awfully young to be pulling the plug on, but the Rangers have been seeking $500 million in taxpayer funds for a new park. That’ll come to a vote in November, but the fear that the Rangers might move if they don’t get a new place to play—one with a retractable roof this time, since apparently in 1994 they didn’t realize that Texas is hot—is definitely there. But the organization isn’t just approaching voters in Tarrant County with a stick—they’ve got a carrot too.

That comes in the form of Texas Live!, billed as a $250 million mixed-use district that features dining, entertainment, hotels, and a convention center in Arlington’s stadium district. There are plans for three different live music and performance venues—Rangers Republic, Live Arena, and Arlington Backyard.

According to a video released by the Rangers showing off the plans, it’ll also include brick façades that suggest a warehouse district that never actually existed, rooftop pools full of what we can only assume will be attractive young people, and vaguely upbeat (if barely audible) music composed on old synthesizers.

The Rangers tout the economic impact for the plan on the Texas Live! website, noting the 3,025 jobs the facility will bring to Arlington (with two-thirds of them temporary construction jobs), and the $2 billion in “direct and indirect salaries”—or the projection that both the paycheck that a server at one of the new restaurants takes home, and the money spent on a work uniform bought near the stadium counts toward that $2 billion impact.

If all of this makes you cynical, well, that’s probably fair. It sounds like a lot of money, but counting direct and indirect impact is the sort of double-dipping that allows organizations like SXSW to claim huge benefits to the local community even in years where they are slowing down. But where SXSW’s assessments are based in real numbers, the Rangers’ $2 billion is based on projections that stretch over a forty-year span. And even $2 billion over four decades is super optimistic for a few reasons (who knows what the future holds!), but chief among them is that the Rangers organization can’t remain committed to a ballpark for more than two decades, so what’s to stop them from demanding a new mixed-use live/work/play entertainment district in Arlington in 2028, and touting how much money it’s going to bring into the community come 2070?

Ultimately, that $2 billion in direct and indirect impact is more like $50 million a year. That’s a lot, but the folks in Arlington don’t get it out of the goodness of the Rangers’ heart. Rather, at least $100 million of it is coming from taxpayers, with $50 million coming from the city and $50 million coming from the state. That also assumes that there’s no fun math in the split like the Rangers called for in their deal for the stadium, in which 60 percent of the money the Rangers put toward it gets paid for by taxes on parking and tickets (as Deadspin notes, in literally every other stadium deal those tax dollars are considered taxpayer money).

Still, the Texas Live! project does sound like a good time, dubious economic model notwithstanding. Projections for the facility look fun, like a place for countless ethnically-diverse young people to hang out with their friends, their bowties rakishly undone as they sit at one of at least four bars inside the Live! Arena venue, ignoring a band and a wall of giant televisions behind them. 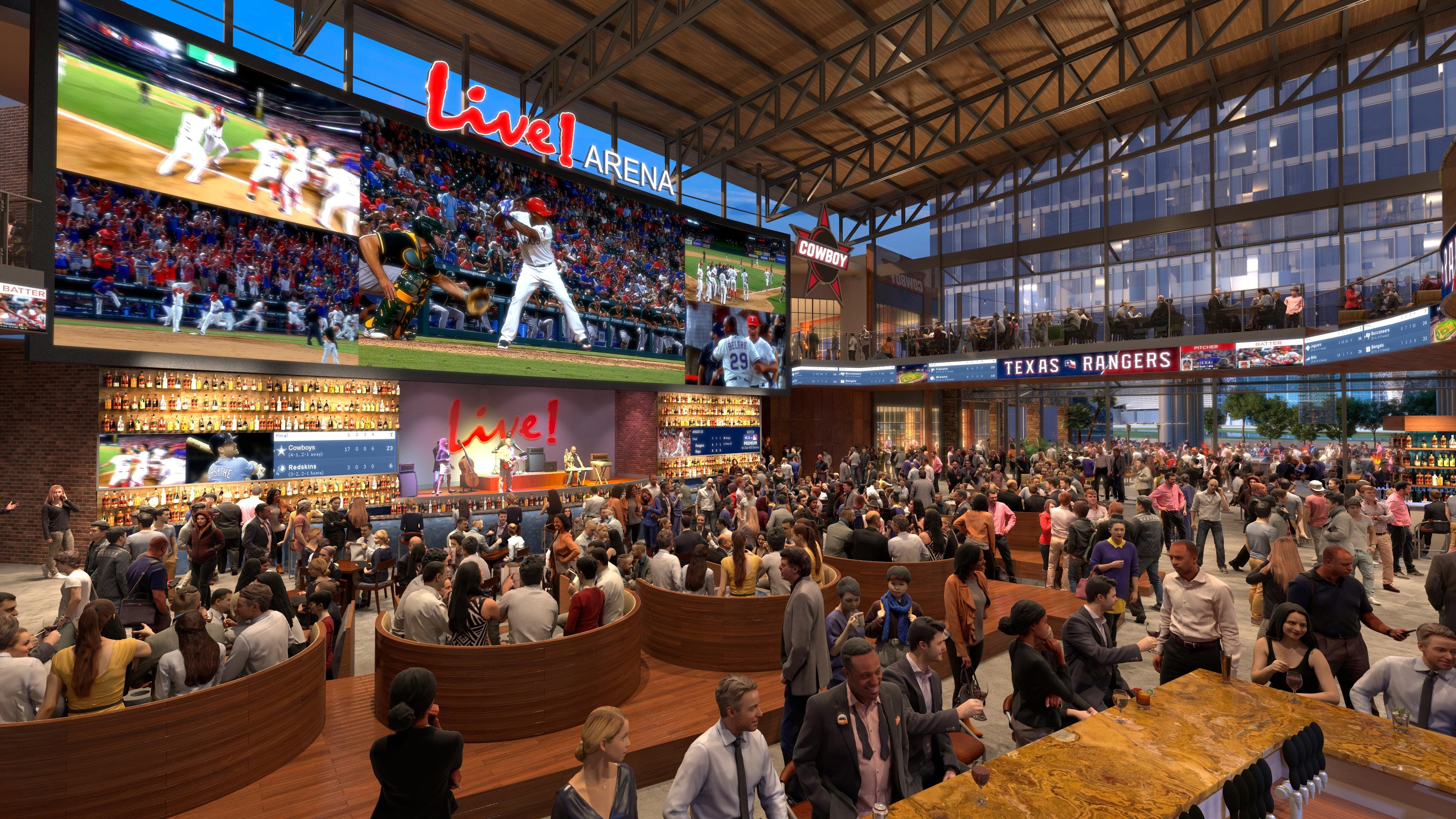 The real question, ultimately, is whether this kind of good time can be offered to the people of Arlington without putting them on the hook for nine figures in public funding—and, more crucially, if they can trust that the investment they make in 2016 will be rewarded with the sort of long-term, forty-year commitment that the Rangers are implying the project will entail. That’s the sort of thing it’s hard to answer, but it highlights once more the challenges inherent in these too-good-to-be-true public-private partnerships.