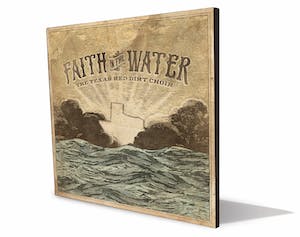 It’s been a dozen news cycles since Hurricane Harvey devastated the Texas coast, but those people whose lives were directly impacted are still struggling to move on. The list of people who sheltered in place during the storm includes Texas Red Dirt songwriters Roger Creager and Kyle Hutton, who waited out Harvey in their respective homes in Northwest Houston. (Neither of them lost anything in the storm, but both saw streets in their neighborhoods flooded.) While they watched the flood waters, they began trading lines for a song that would become “Faith In the Water,” a “We Are The World”-style group jam featuring players in the independent Texas country music scene including Josh Abbott, Jack Ingram, Pat Green, Wade Bowen, Ray Wylie Hubbard, Ray Benson, and more.

The song premieres exclusively in Texas Monthly. Listen below and learn what inspired Creager and Hutton, their favorite stories from the session, and their hopes for Houston and the affected areas.

Dan Solomon: Where did y’all start with “Faith In the Water”?

Roger Creager: For me the song started about five days after the storm, when the waters receded enough to get out. I went to Fort Worth to play a concert. I was watching the news the whole time I was at home, and people saving one another in these johnboats. Of course firemen and policemen were working around the clock, but I’m talking about just regular citizens that were taking their boats out and saving people’s lives. Five days after the storm, I was heading north on I-35, and I saw hundreds of people heading home who had been out here doing that. It was an emotional thing for me when I realized what I was seeing. And that’s where it started for me.

Kyle Hutton: Roger and I live down here in the same area. I sent him a text and he sent me a text back, just checking in on each other, and then tossing lines back and forth, because we’ve written songs together over the years. We ended up sitting down and writing a song that captured the emotion that we were feeling, that captured the emotions that our friends and neighbors down here were dealing with. And I realized what an emotional chord it was striking with me. That’s when we started having a conversation about getting some of our buddies out there to sing with us, and that’s when we decided to put it out there and tried to raise some money. Once we put the word out that we were gonna have a recording session, everything got real humbling then. The response was overwhelming—not only the singers you see listed, but the A-list studio players in Austin, and Ray Benson and Willie Nelson’s recording studio, and all the people coming in and giving their time, and nobody would let us pay ‘em. They wanted to be a part of it.

DS: What were the most meaningful moments in the process for you?

KH: When we put the word out, there were a lot of guys that couldn’t be there because of their touring schedules or whatever. One of the more touching things to me was the willingness of guys like Pat Green, Jack Ingram, Jason Boland, and some of those guys who are on the song who said they couldn’t make it to Austin on the day everybody’s there recording, but who said that they would make it into the studio if we got them the song. So in addition to what happened in Austin that day, there were a lot of guys who got themselves to the studio and got it done, because they wanted to be a part of it.

RC: We got goosebumps once an hour for two days, as we were going through the process. I played at Billy Bob’s in Fort Worth this last Friday night, and I begin to tell the story about seeing the trucks and the inspiration, where it came from for me. And I played the song, and I didn’t ask for anything, but people began putting money on the stage, saying “put that towards your cause.” People put up about $500 that night, and it wasn’t even asked for. That was very humbling, for me, to see the care that people have. I made a comment that there’ll come a time when you can donate, and I’m sure that you will, but they just started. There’s something about the spirit of people. I got a phone call from one of my buddies in California who had been watching the news, and he said, “You Texans are showing the rest of the world how to treat each other.”

DS: The song is billed to the Texas Red Dirt Choir, but there’s also an actual gospel choir on the song. How did they get involved?

KH: We told Clayton Horn, the producer on the project, that we knew we wanted all of our friends to come in and sing a line in the song, and that we wanted everyone to sing along on the choruses. One of the things Roger said was “I want it to feel more gospel,” and we kept working on the song to get it where it had that feel. One of the things we told Clay as we were going into the studio was, “Do you think you can find some members of a gospel choir to come in and help us set the tone for the song?” And he said he knew the perfect people, and he brought in a group of five amazing singers that took the project to a whole new level.

RC: They were from Clay’s church. They set the tone for the project when we got there. They were the first ones to come in and sing. After hearing the song and picking up a couple parts, I could see that they were becoming very emotional too. They went into the other room and had a prayer before they began recording.

KH: They prayed that studio down, man, which was great, because then all our buddies showed up.

DS: What’s the state of the Texas Red Dirt community like these days? Was getting everybody together like this a special occasion, or was it just like any other Friday night?

RC: Those of us who tour full-time, we’re all guilty of putting our heads down and just plowing ahead. Very seldom do we get to pay much attention to our friends, and then occasionally we’ll play big festivals and get to hang out. But an event like this, as far as I know, has never happened. We’re all good friends, but to all come together like this is something new.

KH: It became more clear to me how special it was after the studio session. For hours, there were texts going back and forth in the group text, from some of the biggest names in independent Texas music, just talking about how amazing it was and how glad they were that they got to participate. Speaking to the historical nature of the gathering, Kevin Fowler sent a text that said, “That was epic, thank you for letting me be a part of this historic event.”

DS: What do you want people to take away from the song?

RC: In a world that seems tragic, particularly as we watch storm after tragedy after hurricane after earthquake, it’s really nice to see people loving each other. I feel like this song highlights that. It’s a little bit of a morale booster.

KH: When it’s not on the news every day, or you’re not seeing something as strange as water on the freeways in Houston, there’s the longer-lasting part of the equation: the repair, getting homes back to where they’re livable and they don’t have mold, working through the bureaucratic channels of insurance, and trying to get your life together. My hope is that the song might just remind people that there’s going to be a recovery and a resurrection, and it’s going to be better than it was before after things are rebuilt and restored. I hope it gives people hope—not just in humanity, but maybe also in their circumstances.