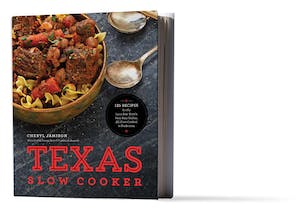 I first met Cheryl Jamison in Austin back about 1993, when she was promoting Texas Home Cooking. I remember barely being able to see the top of her head above a stack of books at the beginning of a line that wound around the second floor at BookPeople. We immediately hit it off, and every few years, I’d get a notice about another book (The Border Cookbook) and another (Sublime Smoke) and another, until there were seventeen in all. She and her husband Bill became a two-person cookbook machine, specializing in dishes with a Southwestern accent (they lived in Santa Fe and Bill was originally from Texas). Along the way, they won four James Beard awards and sold more than 2 million copies. Now Cheryl is on her own (sadly, Bill died in 2015) and has just finished Texas Slow Cooker, adapting 125 classic Texas dishes for busy people young and old. Start out with the three recipes below: a wine-rich beef stew, some spicy jalapeño cornbread, and an apple and berry crisp that’s perfect for fall.

Beef and Texas Red Wine Stew
Inspired by beef bourguignon, this stew takes on Lone Star character if you use a Texas wine such as Texas Cabernet from Kiepersol winery in Tyler or the Rhone-style blended red called Les Copains from McPherson Cellars in Lubbock. Granted, the dish is a bit involved, but it makes enough to serve a party; just cook up some noodles or spaetzle to go with it. The leftovers are fabulous.

Generously spray the inside of the slow cooker with oil.

In a large heavy skillet, fry the bacon over medium-low heat until brown and crisp. Remove the bacon with a slotted spoon and transfer it to the slow cooker. Turn the heat up to medium-high. In the bacon drippings, brown the meat, about one-third of it at a time. Turn on all sides as needed, then transfer to the slow cooker. When the third batch of beef is mostly browned, sprinkle in the flour and cook for a couple of additional minutes. Pour in about ½ cup of the wine, being sure to loosen and include the bits stuck to the bottom of the pan. Put all in the slow cooker.

Add 2 more cups of the wine, plus the broth, onions, carrots, garlic, tomato paste, thyme, bay leaves, and salt. Cover and cook on the low heat setting for 8 to 9 hours, or for 4 to 5 hours on high. The beef should be very tender and the onions and carrots mostly dissolved into the sauce.

In large heavy skillet, warm the butter over medium heat. Stir in the mushrooms and cook for several minutes until limp. Add the pearl onions and cover the skillet for 5 minutes. Uncover and pour in the remaining ½ cup wine. Cook several minutes more, until the onions are tender and the wine has reduced somewhat. Transfer to the slow cooker and stir well.

Discard bay leaves and add more salt, if you wish. Spoon into shallow bowls, scatter each with parsley, and serve.

Jalapeño Cornbread with Sorghum Butter
I took a cooking class many years ago from an East Texas chef named Lamoreaux who made an irresistible cakey cornbread that became the model for this. I use Lamb’s Gristmill’s stone-ground yellow or white cornmeal from the family’s mill in Converse, a stone’s throw from San Antonio. If time permits, I like the extra touch of molasses-like sorghum butter, made from a traditional Texas grain crop. It’s good on pancakes and biscuits too.

Pour ½ inch of water into the slow cooker. Put a 3-inch biscuit cutter in the middle of the cooker, if you have it, to serve as a rack. (You can also improvise a rack by pulling out 18 inches of aluminum foil, rolling it into a snake, and coiling it to fit in the bottom of the cooker.) The water should be below the top of the rack.

Butter the inside of a quart soufflé dish or a deep 6-inch cake pan. (This will be set inside the slow cooker, on the rack.)

In a small bowl, stir together the cornmeal, flour, baking powder, and salt.

With a whisk or an electric mixer, whisk together the butter and brown sugar in another larger bowl, until the mixture is creamy and the sugar is mostly dissolved. Add the eggs, one at a time, then the buttermilk, corn kernels, jalapeños, and cheese.

Pour the batter into the prepared soufflé dish or cake pan and transfer it to the slow cooker. Cover and cook on the low heat setting for 2½ to 3 hours, or until a toothpick or cake tester inserted in the center comes out clean. If the cornbread seems under-done after 3 hours, leave off the slow cooker lid, cook for another 5 to 10 minutes, and check again.

When the cornbread is done, remove the pan from the cooker and set it on a baking rack to cool. When cool, cut the cornbread into wedges or squares in the size you wish.

While the cornbread is cooking, whip the ingredients in a small bowl until thoroughly combined and reserve at room temperature. Serve alongside cornbread.

Apple and Berry Crisp
This crisp goes directly into the cooker, rather than in another dish with a water bath. The crunchy elements in the topping stay crisp but the fruit and butter melt down deliciously. It won’t actually brown much as it cooks so the pecans, brown sugar, and liberal dusting of cinnamon give it a burnished appearance. If you have an oval slow cooker, it will provide the optimum depth for the fruit and topping. (But round works too.)

Combine the oats, pecans, brown sugar, flour, cinnamon, and salt in a food processor until you have a coarse meal. Add the butter and pulse a few times until the mixture becomes evenly crumbly. Add the mixture to the slow cooker. Cover and cook on the low heat setting for 3½ to 4 hours.

Scoop out and serve warm. Leftovers are good at room temperature or reheated.