July 1, 2015, is a date that will live in infamy. The state of Texas was suddenly and deliberately attacked by the Twitter and blog forces of the New York Times Empire’s food section, whose heinous guacamole recipe is, without a doubt, one of the most alarming and disgusting weapons of mass destruction ever unleashed in the history of mankind:

Add green peas to your guacamole. Trust us. http://t.co/7imMY9c2ph pic.twitter.com/oeOMt2qgmh

With those eight words, and that horrid recipe, war was launched between the culinary forces of two great nations. Peagate had begun. So here is our plan of attack. It’s a simple one, but we believe it will be effective: We asked Texas-bred chefs living everywhere from San Antonio to Dallas to the very belly of the Gotham beast to chime in with amazing and breathtaking spins on classic New York dishes.

And we welcome contributions from more of you: take a New York classic, add one or two Texas ingredients, smugly tell the world to “trust you” and away we will go. Unlike pea-befouled guacamole, some of these dishes might even be edible, delicious even. You be the judge.

Brian McManus trained at Brennan’s in Houston before leaving the restaurant industry completely. But he was kind enough to come out of retirement and offer up this take on a New York standard — Texas chili with matzo balls.

Adding a matzo ball to what is an otherwise fairly traditional Texas chili is one of those radical moves that is also completely obvious after you taste it. Like a classier hominy or masa harina, the ball of matzo meal, egg, and vegetable oil simultaneously adds heft and a bit of airy lightness to the meat-heavy meal. We suggest breaking it up with your spoon and stirring it into the chili, thus ensuring every bite has a bit of ball. And believe it or not, it’s even better the next day: the matzo is quite the flavor sponge! 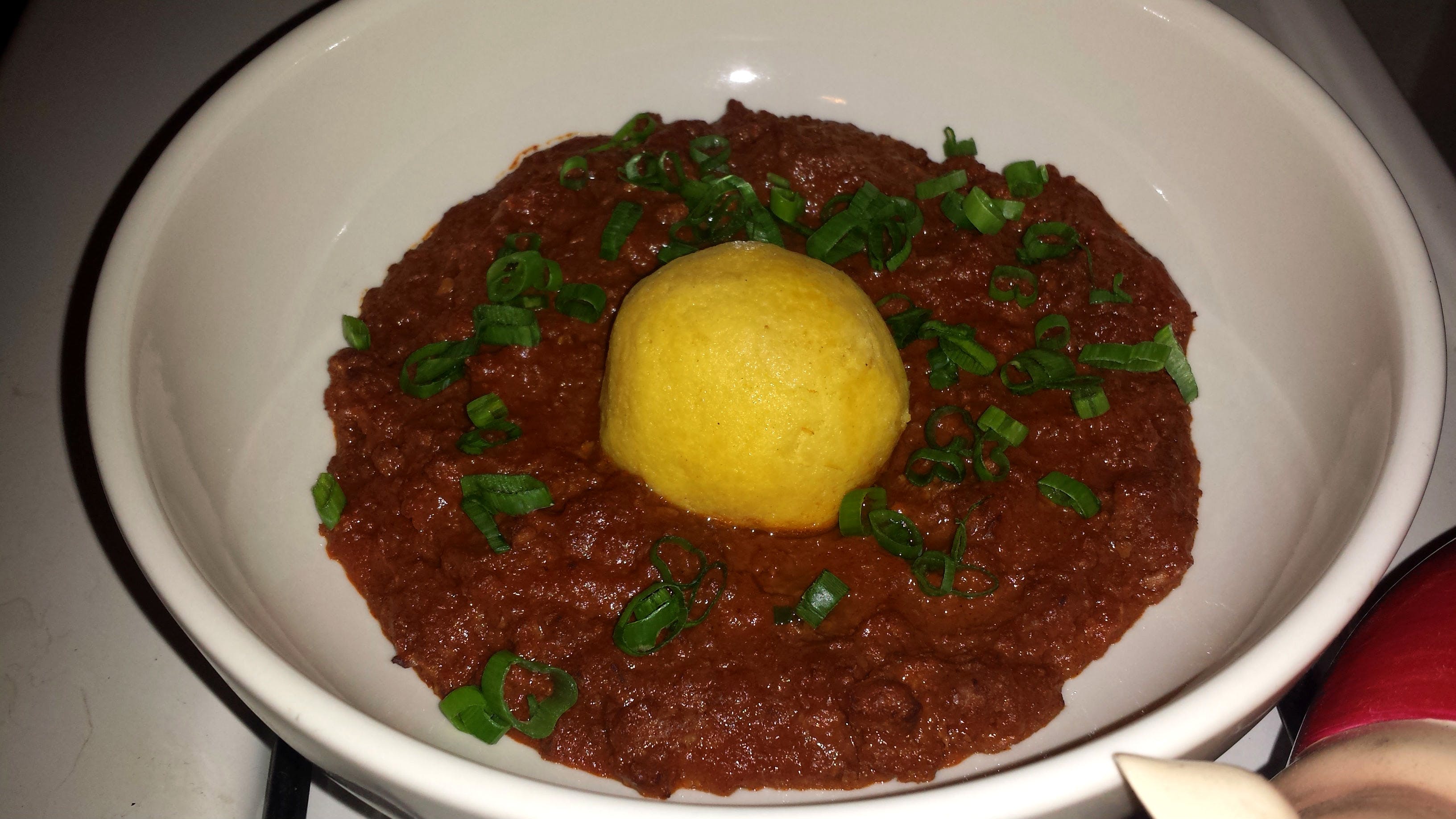 For the matzo balls:

Season beef with salt and pepper. Heat oil in a six-quart pot over high heat. Working in four batches, brown beef, about three minutes per batch. Using a slotted spoon, transfer beef to a plate.  Add onions and garlic; cook until lightly browned. Return beef to pot; stir in tomato paste. Cook, stirring frequently and scraping bottom of pot with a wooden spoon, until tomato paste is caramelized. Add the spice, stirring frequently. Bring two and ½ cups of water to a boil. Reduce heat to simmer. Stir occasionally for around two hours until thick.

Beat the eggs, oil, and seasonings in a mixing bowl. Fold in the matzo meal and mix until fully incorporated. Store the mixture, covered, in the refrigerator for a minimum of two hours, or overnight. Boil twelve cups of water in a four to five-quart saucepan. With greased hands, roll the batter into about six balls, the size of a golf ball, and drop into the boiling water. After about five minutes the matzo balls will begin to rise to the top of the water, and you can stir them gently. Boil until doubled in size, about fifteen minutes total.