Listen, Texas, we should talk about this license plate problem that you have. We get it. Custom license plates are fun, and they’re a source of revenue for the state, and what’s the harm in allowing a given company/school/organization/etc. that wants to demonstrate its Texas-ness by placing its logo on an official state license plate—especially if they’re going to pay for the privilege?

But, look: You’ve got nearly four hundred options now, and some of them are ugly. They crowd the actual content the plate is supposed to contain—namely, an alphanumeric that makes a car identifiable—in favor of a picture of a hamburger or a dolphin or something. Plus, not to get all design snobby here, but some of them use Comic Sans. Have a little self-respect.

Anyway—we’re pleased to note that we’re not the only people who’ve observed that the hoarding of license plate options going on in this state is getting a little ridiculous. As the Dallas Morning News reports, the DMV itself—along with police organizations—has started to reconsider this willy-nilly approach to license plates in our great state:

DMV board chairman Johnny Walker, a Houston trucking executive, said at the January meeting he’s noticed plates with messages too tiny to make out.

“I can’t read some of these plates when I’m driving down the highway. I’m kind of curious as to what they say. . . . All of a sudden, I find myself trying to tailgate somebody” to read it, he said.

“It makes it difficult for someone patrolling the streets to look at a license plate … to figure out [what it says] and to wonder if it’s legitimate,” board member Victor Rodriguez said.

The plates certainly do offer some good to the world. Most of the plates associated with nonprofit organizations cost $30, with a substantial portion (usually $22) of that going to the organization the plate promotes. Others are well-designed objects that allow an ardent supporter to proudly display their affection for a cause, sports team, university, or business in a manner that improves on the visual style of the standard license plate. Rest assured, we would be the last people to decry causes as worthy as insuring Texas children, literacy, animal welfare, or blood banking. But those garish plates do those causes few aesthetic favors. The “blood donor” plate features a picture of an anthropomorphic drop of blood, dressed like the Texas flag, tipping a cowboy hat and offering a thumbs-up to passing motorists. Does that really inspire you to make a trip to the blood bank?

Meanwhile, other plates simply offer lectures to those who have the misfortune of sharing the road with the person who paid to promote the cause: Saving water is important, but who wants a lecture from a license plate? Sharing the road with cyclists is absolutely vital for the health and safety of people who ride bikes, but it’s hard to take that message seriously when there’s an image that we’re pretty sure is secretly Lance Armstrong on the left-hand side, and would it have killed the plate’s designer to put a comma between “road” and “y’all”? Protecting dolphins is great, but that’s a complex problem that requires more than just a visual reminder that dolphins are cute. And being told to smile by complete strangers is obnoxious under any circumstance—how much more insulting to have that command issued by an impersonal piece of metal affixed to the bumper of a passing pickup?

But at least all of these plates come from a place of charity and kindness, regardless of how they’re implemented. Others, meanwhile, are strictly an exercise in crass commercial advertising, for products between which it’s hard to draw any reasonable correlation to automotive transportation: 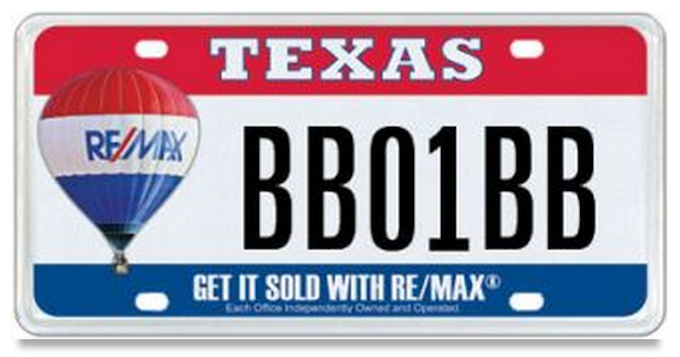 Far be it from us to deny the iconic impact of Dr Pepper in Texas, or the deliciousness of small, Texas-based fast food chains like Austin’s Mighty Fine Burgers or College Station’s Freebirds World Burritos—and we will acknowledge that the latter two, at least, offer well-designed pieces of advertising product—but this is all a bit ridiculous, isn’t it? Mighty Fine Burgers operates four restaurants in the Austin area. Do they really need a customized license plate that anyone in the state can purchase (and receive a $100 gift card for, if they notify the chain)? And Re/Max is based in Denver, for Pete’s sake.

The overwhelming number of license plate options really does seem to distract from the purpose of the plate. We’d never question the idea that, say, our servicemen and women should be able to display their record on their license plate, but does one really need the ability to declare their favorite NASCAR driver or off-brand baseball team, or three different options to demonstrate an affinity for the Dallas Cowboys? 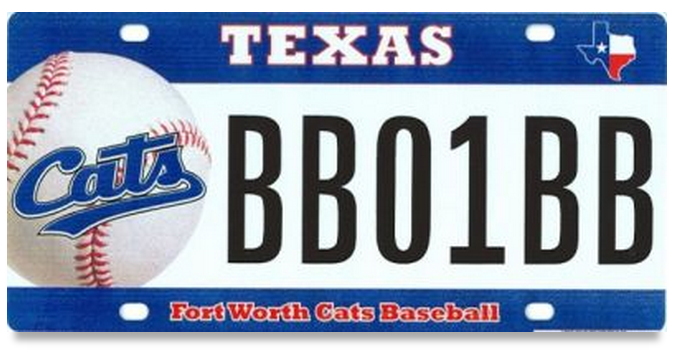 The Jeff Gordon plate is an ill-designed mess, while the Fort Worth Cats plate creates a potential road hazard by causing other drivers to take out their cellphones and google “fort worth cats baseball?” in order to verify the existence of the United League Baseball team whose average attendance is under four thousand people a game. As for the Cowboys, fine, but this is Texas—it’s not exactly a bold statement to declare one’s allegiance to the ‘Boys. Maybe if they offered one for the Philadelphia Eagles (though that might create other road hazards).

Plus, if a person does want to show off their personal affection for whatever it is they are personally affectionate toward, what’s wrong with the old-fashioned vanity plate? If you’re a Cowboys fan, why not prove your devotion by being the only person in the state to have a plate that reads “AIKMAN,” or “AIKMAN8,” or “8KMAN,” or “JRYSUX,” or “DEZZZZ,” or whatever it is that best expresses how you, personally, feel about the team?

All of which is to say that, yeah, maybe the DMV and the police have a point that this has gotten out of hand. We’d hate to look like old fuddy-duddies here, but there was a time when people had only a very slight smattering of license plate options, and that was good enough. Consumer choice is a good thing, generally, but there comes a point at which providing nigh-unlimited options stops being useful. We passed that point at least two hundred custom license plates ago.