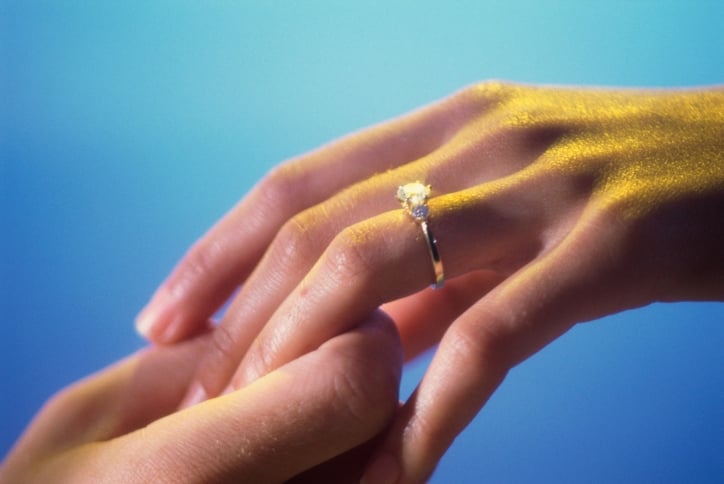 Last week, in the span of 72 hours, two Houston men filed suit against their ex-fiancees, demanding the return of their engagement rings.

I’ve been following Harris County court proceedings for more than five years now, and the only similar case I can recall here was a true doozy. That was when former Houston Texan star Mario Williams sued his ex for the return of a honkin’ big 10-carat, $800,000 rock. And of course in Dallas, Longhorn great and disappointing pro Roy Williams sued for and got back his $76,000 ring from former Miss Texas Brooke Daniels.

But those cases came years, and miles, apart. And now two in three days in one county courthouse? Could this mini-spate have something to do with the straitened times brought on by this new Oil Bust? Are men today less willing to say, “Screw it, keep the damn thing,” or are women more likely to cling to and hock these expensive baubles?

The latter seems to be the deal in the first of these two cases. In those pleadings, an oil company exec claims that his high-end-real-estate-agent former fiancee dumped him on Christmas Day, five days after he presented her with a $40,000 Tiffany & Co. engagement ring. He states in the suit that she has admitted in writing that she unilaterally broke off the engagement, and he contends that she never intended to marry him to begin with. The suit argues further that she has “absconded” with the ring in order to partially repay her $87,832.19 debt to the IRS. (The plaintiff helpfully included a threat letter from the taxman as an exhibit.)

If that’s her plan, she’s likely to be bitterly disappointed, because the suit also notes that, $46K price tag or no, the 1.52-carat ring (color grade: J; clarity grade: VS1) has been professionally appraised at a resale value of a mere $6,140. That’s just a drop in Uncle Sam’s bucket. Sick burn, brought to you by De Beers! (And no matter how much she can get for it, she’d better not even try: for the time being, the judge has signed an order temporarily forbidding the woman from selling the ring.)

The second of the two cases presents murkier details, while perhaps sharing a little too much information about the former couple’s failed romance.

They met at a local restaurant in April 2012, began seeing each other on occasion, and “on July 27, 2012, they began serious dating,” whatever that means. “On a trip to San Francisco in September 2012, Plaintiff fell in love with Respondent,” the suit continues, the language of amour now rendered in chilly legalese. By the end of that month they were diamond-shopping, and by the end of October, the hopeful groom had bought and set a stone. The ring is now insured for $42,000.

The proposal came in December at New York’s Park Plaza Hotel, and the bride-to-be slipped the ring on her finger later the same day in Central Park. The following month, the man loaned his fiancee $15,000 in cash to pay her debts. According to the suit, the woman was to pay it back by taking care of some of the honeymoon expenses. So far so good. Even better, in March 2013, he contracted to build a marital home in the Houston Heights, thus “furthering his commitment.”

And that’s when things started going awry, and the suit’s wording gets a little vague.

“After an argument over a text message, Plaintiff paid for eight counseling sessions with a Houston therapist. The parties met individually with the therapist, as well as having joint sessions. Respondent stopped going to the therapist.”

(Hold up, who got that text, who sent it, and what did it say? If it was worth eight therapy sessions, it must have been powerful stuff.)

In July of last year, while the man was abroad, the woman flew the Heights coop the man had built for them. For the next three months the man asked her to return the ring to him if and only if she did not wish to marry him. “He still hoped they would marry,” the suit states. And then in October she ceased discussing the matter, and more recently she posted a picture on Facebook cozied up to another man, with her bare ring finger clearly visible.

One wonders if that is what caused her former beau to finally pull the trigger on the suit, which demands the return of the ring and the $15,000 loan. But not the $13,000 in itemized jewelry he also lists in the suit. She can keep all that.

But not because he was feeling generous. Those expensive trinkets were simple gifts, whereas, under Texas common law, an engagement ring is what as known as a “conditional gift.” True ownership does not accrue to the recipient until the condition—marriage—is met. Should the rice never fly, ownership of the ring goes to whoever was not at fault in the breakup.

That’s the way it is in Texas, anyway, and it could be the wisest approach. In other states, the ring would revert to the man even if he got caught having an affair with his fiancee’s best friend, while in a smaller number of states, the woman would get to keep it even if she said “Thanks, see ya, bye” the second she opened the box.

As for that $13,000 in itemized jewelry in the second suit discussed above? Tough toenails, the same as it was for Mario Williams, who also complained that his ex had rung up his AmEx to the tune of $108,000 and that he had spent $230,000 on her, all while she (allegedly) had no intention of ever tying the knot with him.

“Gold-digging is not illegal,” Houston attorney and legal analyst Joel Androphy said at the time.