Days after a shooter burst into the Sutherland Springs First Baptist Church last Sunday and shot 26 people execution-style, Pastor Frank Pomeroy—who lost his own fourteen-year-old daughter that day—announced that he plans to demolish the church building. When religious establishments are attacked, they can ruin the very sanctity and sense of security that churches, mosques, and temples offer their members. They can make a place of holiness and worship feel exposed and unsafe.

As Pomeroy tries to figure out how to move himself and his congregation forward, so too are other pastors around the state.

Reverend Peter Aguilar could hear the sirens from first responders and ambulances as he was finishing worship at Floresville United Methodist Church, just a few miles away from Sutherland Springs. Members of his congregation, many of whom had family or connections to members in the Sutherland Springs church, began receiving phone calls and text messages. Aguilar volunteers as a chaplain with the Bureau of Alcohol, Tobacco, Firearms and Explosives, which involves making himself available to people at crime scenes. He called Wilson County Sheriff Joe Tackitt to see if he would be needed at Sutherland Springs.

“So I went to the crime scene, probably around 12:30 p.m., and they had already taped off the crime scene. This was pretty sobering, it was pretty horrible,” Aguilar recalls. He spent time comforting church and community members and heard “some horrific stories.”

After arriving home from his service on Sunday, Pastor Sid Hall of Trinity United Methodist Church of Austin, received a text message from Aguilar. The two belonged to a clergy group that was planning a trip out to the Texas Hill Country, and Aguilar, who led the group, informed him that he would be delayed because he was at the scene of the Sutherland Springs shooting.

“That’s how I heard about it,” Hall says. “And my immediate response was just horror that it happened, but also concern for my friend who was being called on to respond as a pastor in that very, very traumatic situation.”

In San Antonio, Pastor George Chambers of Alamo United Methodist Church had just returned from church and turned on the TV to the news of the shooting. “We were just shocked that this type of event has hit so close to home,” Chambers says. “Many of the people that are affected by what took place are just down the road from us. We have many families in our church that have school teachers that teach in the district connected to the community affected.”

As the pastors watched the news unfold, whether on the news—or, in Aguilar’s place, listening to firsthand accounts—they all experienced a mix of horror, grief, and anger.

“When you hear the story of a pregnant woman being killed and an eighteen-month-old child being killed and then the stories go on and on, you can’t help but to feel this anger at this waste and loss of human life,” Aguilar says.

“When is this going to stop?” Hall remembers thinking. As he followed the news and mourned for the Sutherland Springs community, he says he was also “almost dreading the political jockeying” that often follows mass shootings in the United States now. It felt clear to him that the United States’ gun laws needed to change, but also that very little would. Almost immediately after the news broke, he began receiving emails from members of his church asking the same question: “How safe is our place?”

That question of security is one that all three pastors now find themselves working through with their churches. Chambers, who has active and retired military members of his church, as well as law enforcement and multiple members with licenses to carry, says his church will have a board meeting on Friday to figure out what steps need to be taken to protect their congregation. Aguilar says that a retired military member of his church asked him if he could bring his gun to worship, and Aguilar gave him permission. His church will be discussing security issues “until things die down.”

Hall says he spent much of time with other clergy in the aftermath of the shooting discussing security measures. “We all feel like there is only so much you can do short of doing what happens in airports with metal detectors and conveyor belts,” he says. His church insurer, Church Mutual, has announced a safety training in the spring that Hall thinks all his church leadership should attend “to help us understand what steps we can take that we’re not taking now to make this as safe as absolutely possible.”

Another immediate need for church leaders is what message to share with their congregations this Sunday. Chambers has settled on continuing with the sermon he began last Sunday about the prodigal son. On the other side of that story is the other son, who stayed home and obeyed his father, but became angry and upset when the prodigal son came home.

“Many people today, like this fellow that committed this crime—this massive murder—was angry, he had baggage, he was hurting,” Chambers says. “And the question is, what can we do to give our problems and our burdens and our struggles to God so that we can go forward and not cower down to the things that are taking place. ‘Cause we as Christians believe that Scripture teaches us that in the end times, there’s going to be tragedies and things that take place and we are not to be afraid and hide. We are to be followers of Christ and to go forward and take our faith into the community and share and be with people and take care of people and love people as Christ would do.”

On Sunday, Trinity Church of Austin will be having a prayer ritual for all the victims and their families, including the shooter, who Hall refers to as “the twenty-seventh victim.” Hall still believes prayer is important at a time when people feel it’s not enough. “I think there was a representative or senator that said ‘I’m done with praying’ when a moment of silence was called for in the Congress,” Hall says. “And I get that. I’m still going to pray. I’m still going to hold these people in my heart but I’m also going to do what I can as a citizen to bring about the kind of change in our gun laws that makes a violent person less able to use weapons that can kill dozens of people in just a few moments.”

But Hall is less sure about what to tell his congregation this coming Sunday. He’s reaching out to colleagues and the leadership of the two denominations his church falls under—the United Methodist Church and the United Church of Christ—to figure out what message to convey. But this particular loss for words feels familiar to Hall.

“It reminds me a little bit about when my children were little and a friend died,” Hall says. “I know that my children wanted to hear that that could never happen to them and that I would make sure it didn’t happen to them, but I couldn’t ensure that. So I remember having that struggle of how do I talk to my child about this and give them assurance and remind them that I am here for them? That I will do that my best to make sure they are safe but to not give them a false sense of security that it could never happen to them. That’s a little bit how I feel right now.”

Aguilar, however, is clear on what message his congregation, which is so closely connected to Sutherland Springs, needs to hear this Sunday. He plans to deliver “a message of clarity and truth,” using messages from Galatians Chapter 6 about not growing weary of doing good, and the Beatitudes, in which Jesus uses “salt of the earth, the light of the world, the leaven in the world” as metaphors for how people should live their lives. Ultimately, he wants his congregation to have hope, strength, courage, and perseverance as they begin the long work to help rebuild a community. As they care for themselves and their neighbors, Aguilar wants to impress another key message for them: “Do not give in to fear.” 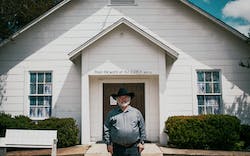 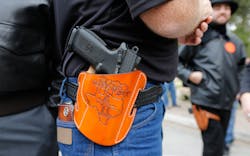 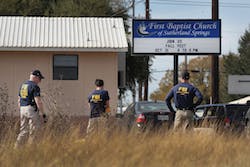