Wanna see the most cringe-worthy clip of the 2016 presidential campaign thus far? Here’s raw footage that a professional film crew shot of Ted Cruz trying to herd various family members into hitting all the right talking points in a campaign ad. As CNN explains, it’s not uncommon for B-roll of candidates to make it online as a way for campaigns to skirt election laws. Rarely, though, does unedited, awkwardly hilarious material of this caliber end up in the hands of a mocking public.

Finding Sanctuary — Things got heated at the Capitol as the Lege got into it, once again, over sanctuary cities. As the Austin American-Statesman put it, a state Senate hearing Thursday “called to study so-called sanctuary cities revealed the divisions between Democrats and Republicans on the issue to be deeper than ever.” The Texas Tribune didn’t mince words either, writing that “Republicans left no doubt they are hell-bent on passing state-based immigration measures when lawmakers return to Austin in 2017.” There was once again debate as to who should have the greater say: local officials or state authorities, a rather awkward question for those who are so keen on the get-the-government-off-our-back rhetoric, as Texas Monthly‘s Dan Solomon previously pointed out. As both stories remark, Dallas County Sheriff Lupe Valdez, who is an outspoken opponent of strict anti-sanctuary measures, was not allowed to testify at the hearing. Not that she didn’t speak her mind. “Valdez said outside the hearing room that Birdwell’s decision to block her testimony meant the Veteran Affairs and Military Installations’ Subcommittee on Border Security would hear only part of the story,” according to the Statesman. “Valdez insisted that she regularly cooperates with federal immigration officials, but that a law to ban sanctuary cities would end up pushing people in the country illegally into the shadows, where they could become victims of crime.” Those who did speak — the director of the Department of Public Safety, the state deputy attorney general, and a rep for the Sheriffs’ Association of Texas — didn’t offer any resistance to tougher, state-controlled efforts. “Near the end of the 3½-hour hearing, [Senator Charles] Perry asked [the state deputy attorney general] if the Legislature could withhold state money from city and county governments that support sanctuary cites. Starr said he knew of nothing that would prevent such action.” So get ready for another state vs. city fight in 2017!

Outta Luck in Lubbock — Several state publications are reporting that the Federal Justice Department has filed a lawsuit against the city of Lubbock over the hiring practices of the local police force. “Federal officials allege in the lawsuit filed Wednesday the department violated the federal Civil Rights Act in the way it administered its written and physical exams. They contend the city failed to show that the tests screened candidates for skills that are required for the job,” the Lubbock Avalanche-Journal writes. “Specifically, federal officials say the police department discriminated against Hispanics and women in hiring entry-level police officers.” The lawsuit is not a complete surprise, as the Justice Department had previously sent a letter to local officials after its investigation found that the police department “‘engaged in a pattern or practice of discrimination against Hispanics and women’ in hiring probationary police officers.” According to the investigation, “a higher percentage of Hispanics failed the written exam while a higher percentage of women failed the physical test.”  The police department didn’t have an immediate response to the lawsuit, but in June “Police Chief Roger Ellis said he believes the current standards are necessary for the police force” and that the tests are on-par with other cities,” according to the Avalanche-Journal.

Mean Memes — By now, Texas politicians should realize that trying to create clever social media memes is a bad idea. It would seem, however, that no such memo reached Lieutenant Governor Dan Patrick. Some back story: The New York Daily News made a splash on the Internet after it previewed its front page the day after the San Bernardino shootings. The front page headline screamed “God Isn’t Fixing This,” and featured the tweets from several high-profile politicians who posted staid variations of “our thoughts and prayers are with the victims” on social media. Patrick, who promised to serve the Lord first and the citizens of Texas second during his inauguration, was not going to take this insult. “I’m disgusted by this morning’s New York Daily News cover, which discounts the power of prayer and pushes a political agenda in the wake of the San Bernardino shootings,” Patrick wrote on Facebook, according to the Dallas Morning News. “I would like to reiterate my invitation to pray for the victims and their families during these dark times.” In addition, he offered his own version of the front page, which featured Texas-based thoughts-and-prayers tweets, but the headline read “God Hears Our Prayers.” 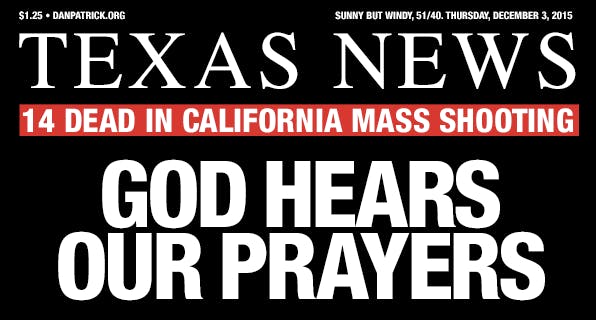 Unfortunately, just above that headline, Patrick’s team had attempted to provide some context, and the mock front page ended up reading “14 Dead in California Mass Shooting: God Hears Our Prayers.” The Internet went nuts. Patrick later deleted the Facebook post and tweet, saying it had been “misrepresented,” and blamed “those … who suggested a different meaning to our tweet.” As the Morning News points out, this isn’t the first time Patrick has had technical difficulties. “The strict conservative who is known for his strong stance against same-sex marriage once accidentally tweeted ‘MARRIAGE = ONE MAN & ONE MAN.’ That tweet was almost immediately taken down.”

What Is Art? — Remember when a San Antonio artist used Austin’s now-iconic “I love you so much” graffiti and reimagined it to express his (and our) love of tacos just a few days ago? The story made the rounds in Texas, but apparently city officials didn’t get the message. “The artist’s whimsical interpretation … had been mistaken for run-of-the-mill graffiti,” and was painted over by the city, according to the San Antonio Express-News. Problem is, the “graffiti” was legitimate “art” (whatever the difference might be between that!). Thankfully, “by mid-afternoon, balance had been restored. Apologies were made. There were promises that it wouldn’t happen again. And Muñoz had restored the work with what was arguably an improved 2.0 version. He had permission from the building owner, who just asked him not to post anything vulgar, religious or controversial. There’s not much less controversial in this world than professing one’s love for tacos.”

Gohmert’s Goin’ for Another Term

Did Someone Just Rat Out the ‘Affluenza’ Teen to Authorities?

Apparently, Models Get ‘Creeped Out’ By the Texas Owner of Maxim