Well, this will warm the cockles of your heart. Check out this video of a McKinney family welcoming their newly adopted son in the best way possible—by placing him under the tree and surprising his siblings. Spoiler: the girls absolutely lose it. You might, too. 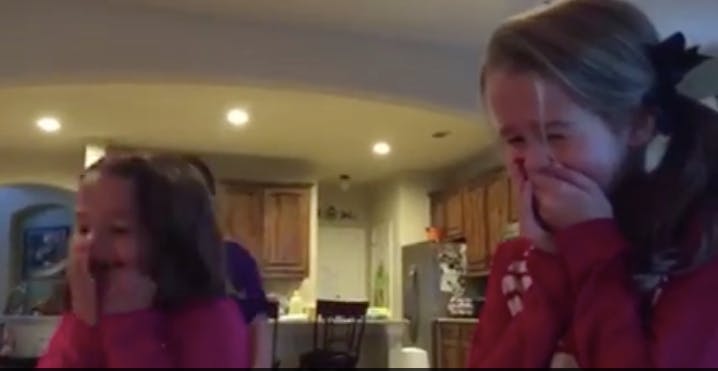 Never Mind — Remember all the fussin’ state officials did last week over blocking Syrian refugees from coming to Texas? Well, they take (some of) it back! “Texas backed down Friday from efforts to block six Syrian refugees from resettling in Dallas after the Obama administration reiterated in federal court that the state had no authority to do so. The swift reversal diffused a standoff Texas started after becoming the first state to sue the U.S. government in efforts to turn away Syrians following the terrorist attacks in Paris,” writes the Associated Press. The family at the center of the battle, as well as another group, is expected to arrive Monday in Dallas and Houston, respectively. Not that this will end the fight. “[Attorney General Ken] Paxton, however, said he is not entirely dropping the lawsuit. He still wants a hearing next week that would give Texas assurances that the Obama administration will work with the state on refugee resettlement.”

Bad Teachers — If you’ve been keeping up with state and local news, you might have had the impression that Texas teachers have been engaging in inappropriate conduct with students. Unfortunately, you’re correct. The Lege has taken notice as well, and on Monday some lawmakers will “launch a comprehensive review of how Texas should respond to the increase in complaints of sexual misconduct by teachers and inappropriate relationships between educators and students,” according to the Austin American-Statesman. The figures seem rather alarming. “Over the past seven years, there has been a 53 percent increase in the number of student-teacher relationships investigated by the Texas Education Agency. In fiscal year 2015 there were 188 such cases. Investigators with the agency say the cases typically involve well-liked teachers and coaches who foster inappropriate relationships with students via text messages and social media.” As the story notes, “Monday’s state Senate education committee hearing will mark the first time legislators have addressed educator misconduct in a meaningful way since 2007, when they passed a law that required all educators to be fingerprinted to make tracking criminal behavior easier. Two other law changes this year aim to improve how improper student-teacher relationships are investigated.”

Profiled — If you’re brown and Texan, you might have trouble on the road. “Over the past five years, Hispanic motorists stopped by Texas Department of Public Safety troopers were 33 percent more likely to be searched than white drivers. Yet those inspections were less likely to result in the discovery of drugs, weapons or illegal currency than the searches performed on white drivers,” according to the Austin-American Statesman, which did a pretty eye-opening analysis of traffic stops (15 million total stops by the DPS in the past six years!). The research also found that “During the same period, troopers discovered contraband on African-American men searched during traffic stops at slightly higher rates than white men. Yet a black man pulled over by the Texas state police was also more than twice as likely to be searched as a white man.” The piece very diplomatically points out that this disparity goes against DPS’s expressed goals of fair and equal stops, but perhaps some good will come of it. According to the Statesman, “the agency would hire a contractor to review the way DPS officials collect and analyze traffic stop data.” To it’s credit, the DPS’s “search rates of all drivers have dropped significantly in recent years. They are also relatively low compared to some agencies,” with the paper noting that Missouri’s rate is terrible.

Check Out This Texas-Sized Lego Menorah

Looks Like We Won’t Have A Secession Vote After All

So … Didja See That Baylor Vs. UT Game?