Important Facts of The Day

Whataburger is known for a lot of things—their ketchup, being both God-approved as well as a popular teenage Fight Club—but what else can you recall about our state’s greatest gastronomical treasure? Luckily, The Thrillist has posted the listicle, “Ten Things You Didn’t Know about Whataburger” in order to help you “get to know them on a deeper level.” Digest and enjoy.

Below is, as the Austinist remarks, the most badass thing you will see all day. On Tuesday, Ann Richards’s son presented Wendy Davis with his late mother’s engraved shotgun. It lacks the pure awesomeness of Richards actually shooting guns and/or riding a motorcycle, but it’s not a bad shot: 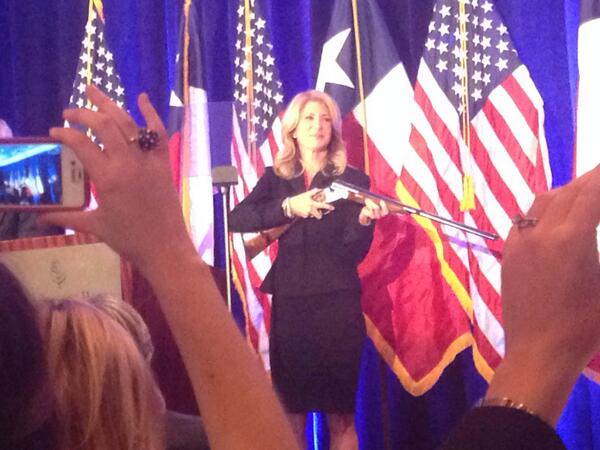 Clean Skies Over Texas? — The Lone Star State maybe be constantly threatening to secede from the Union, but on Tuesday the two sides did come to an agreement over at least one thing: Texas’s clean air plan. Cutting though the smog, the federal government essentially allowed some “operating flexibility” surrounding the booming oil industry, which has a tendency to create a lot of pollution. “The deal comes after years of bitter bickering between the federal and state agencies over environmental regulations” that had “forced more than 100 industries, including some of the nation’s largest refineries, to work directly with the EPA to get new operating papers,” according to the AP. Still up in the polluted air is “what overall standards were agreed to” and what kind of impact the new agreement will actually have. Though anyone expecting the state to keep the oil industry in check ought not hold their breath.

Central America Bum-Rush — The Obama Administration, which has overseen more deportations than its predecessor, has been upping its game with border apprehensions. New data shows that “U.S. Border Patrol agents last fiscal year apprehended about 57,500 more people attempting to cross into the United States illegally via the southern border than in 2012,” according to the Texas Tribune. And apprehensions from Central America saw a whopping 71 percent increase. Of course, none of this is to suggest that border security actually works, only that both sides now can erect talking points as dependable as a wall around Mexico. “Proponents of immigration reform may say the increase in apprehensions means that the Border Patrol is doing a better job of securing the border,” notes the Tribune, “while opponents may argue that more apprehensions indicates that more people are getting through.”

Bernie: The Sequel — The mystery surrounding Bernie Tiede’s return to Carthage continues. Last week, the former mortician was transferred from jail in New Boston back to the Panola County, to appear before a judge. Skip Hollandsworth, who wrote the original Texas Monthly story that was eventually turned into a Richard Linklater joint, recently shed some light on the proceedings. Bu KLTV reported yesterday that “the town is on edge” over the arrival and several city officials still have no clue what’s going on. “No one is sharing any information with us,” said the Chief Deputy. Even the D.A.’s office could only say that they’re on “standby mode.” So … standby for more.

A Dying Monarchy — More frightening than a Mothman siting, Texas is in danger of losing the presence of its state insect, the Monarch butterfly. Experts say that the number of Monarchs taking their annual migration dropped to their lowest level since record-keeping began in 1993, according to the AP. “Their report blamed the displacement of the milkweed the species feeds on by genetically modified crops and urban sprawl in the United States, extreme weather trends and the dramatic reduction of the butterflies’ habitat in Mexico due to illegal logging of the trees they depend on for shelter.” The most symbolic of butterflies isn’t going extinct—they flutter worldwide—but the shocking “statistical long-term trend” could mark the end of the insect’s visual significance in North America. Worse yet, that Texas might have to finally name the Flying Cockroach as its state insect is a horrifying thought.

The Bigfoot Circus — The Texas man who not only claimed to have killed a bigfoot near San Antonio, but recently published photos of his big game capture, recently announced details regarding his proposed exhibition tour though Texas and the country. The Houston Chronicle has the developing story. “Expert tracker” Rick Dyer and his “management team” said he will be showing off specimen in Alamo City and the Houston area sometime next month. Responding the Chronicle‘s cheeky inquiries, the Texas Parks and Wildlife Department, which has a sense of humor, says it has no restrictions on bigfoot hunting and that “you just need a hunting license.” Conversely, People For the Ethical Treatment of Animals (PETA), which has no sense of humor whatsoever, adamantly opposes the killing of fictional creatures.