In case you missed it, Whataburger is officially the best burger restaurant in all these United States. Or at least according to Fast Company, which wrapped up its awesome bracket-style tournament as determined by voters. Better luck during next year’s burger bonanza, Five Guys: 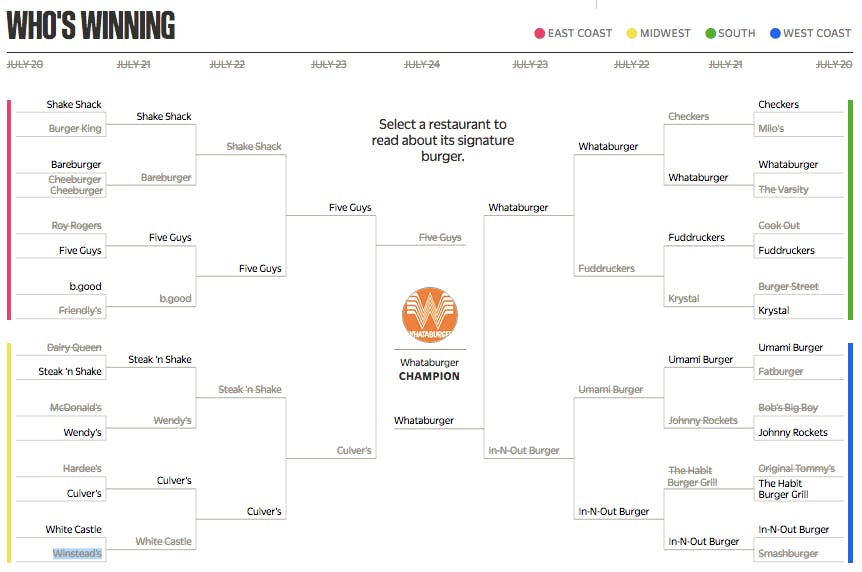 New-ish Oath – As expected a couple of weeks ago when the group’s executive committee voted on the issue, the Irving-based Boy Scouts of America has officially decided to allow gay men into leadership roles. The BSA is expected to announce the end of its longtime ban today. “The proposal the executive board will take up comes two years after the group lifted its ban on openly gay youth, a dramatic step for an organization whose leaders went to the Supreme Court to fight accepting openly gay members,” writes the Washington Post. Although the blanket anti-gay policy is officially lifted, “the resolution allows troops chartered by a religious organization – including churches, mosques and synagogues — to discriminate, and to ‘continue to choose adult leaders whose beliefs are consistent with their own.’”

Perry’s Partial Problems – Ya can’t win’em all, and Rick Perry learned that lesson Friday when a state appeals court tossed out one of the two charges against the former governor. The Third Court of Appeals said the charge of “coercion of a public servant” violated Perry’s First Amendment rights and that the statute itself was unconstitutional. The decision still leaves one felony charge hanging in the air — misuse of office. After the decision, Special prosecutor Michael McCrum said that he thinks “there will be a trial before the end of the year,” according to the Austin American-Statesman. Perry’s legal dream team, obviously trying to put away this whole mess so the presidential candidate can get back to pure campaigning, said (without precedent, it seems) that the felony charge is a misdemeanor at best: “The remaining charge is hanging by a thread, and we are confident that once it is put before the court, it will be dismissed on its face.”

Gone But Not Forgotten – Sandra Bland’s funeral was held Saturday in Illinois with hundreds in attendance, and Texas residents marked her passing, too. On Sunday, hundreds “gathered at the Johnson-Phillip All Faiths Chapel on the campus of Prairie View A&M University, Bland’s alma mater,” according to the Houston Chronicle, holding a vigil and later marching “down the road to outside Hope AME Church, where Bland was arrested July 10.” Meanwhile, “dozens of people protested outside the [Katy] home of the state trooper who pulled over Sandra Bland weeks ago,” reports KTRX. The tragedy is still commanding national attention, with Perry saying on CNN’s Face the Nation Sunday, that “obviously I don’t think [Texas State Troopers] acted appropriately. Transparency is really important in this process so all of the people in the state of Texas know this has been appropriately investigated.” For a little extra reading, both the New York Times and the Associated Press ran stories yesterday – already well-reported here in Texas and abroad – about Waller County’s less-than-perfect record when it comes to race relations.

Tweaking in Texas – Unlike certain nearby neighbors, Texas hasn’t seen too many stories and arrests concerning meth. That’s changing. “A growing number of Texans are seeking treatment for methamphetamine addiction, reversing a downward trend in abuse in the state since a 2006 federal law banned over-the-counter sales of medicine containing the synthetic drug pseudoephedrine,” reports the Texas Tribune. “Last year 6,219 Texans sought substance abuse treatment for methamphetamine and amphetamine addiction, up 590 from the previous year.” “We’re in the middle of a methamphetamine epidemic,” said a researcher at the University of Texas. One possible reason for the uptick is cheap and powerful meth coming across the border from Mexico and that “while there has always been some methamphetamine coming into the country from Mexico, the problem has been growing.”

The Art of the Sleaze Deal – When Donald Trump visited Laredo last week, he said a bunch of arrogant things, defended his caustic statements about immigrants, and even got into with a reporter from Telemundo. So everyone (particularly Latinos) is in complete agreement that he’s terrible, right? Not quite! The Associated Press has an interesting post-visit dispatch from the city, noting that “the billionaire businessman’s visit exposed evidence of a divided community whose overwhelmingly Hispanic population both decried Trump as racist and cheered his hard line immigration views.” As the story goes on to explain, “Interviews during and after the whirlwind tour with more than a dozen local residents underscored the danger Trump represents to the GOP’s relationship with Hispanic voters and his appeal to a vocal segment of frustrated voters, many Hispanics among them, who see a glaring problem on the nation’s southern border that requires attention.” It’s a fairly short piece, and entirely anecdotal but, hey, maybe Trump is the candidate we deserve.

The Media are Very Unhappy with the Waco Shooting Gag Order

The Dallas Observer’s LiveJournal of the Annual Juggalo Gathering

Next Leader of National Landmen’s Association is a Midland Landwoman

Astro’s Biggio Gets Bronzed at Baseball Hall of Fame