From the Bigger-in-Texas Department, A&M revealed college football’s largest videoboard yesterday. As if to remind UT that the Aggies are gaining as the state’s top football team, the screen is “fractionally” bigger than the University of Texas’s Godzillatron: 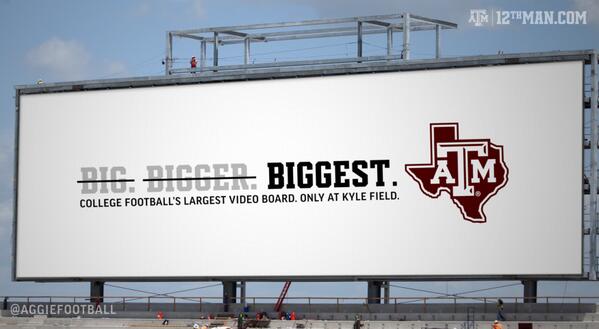 Domestic Disturbing — If you live in or around Houston, you no doubt heard about the horrific incident that the Chronicle called “the Spring Massacre.” Four children and two adults were shot to death yesterday in what was “obviously a domestic situation that went south,” according to authorities. The Spring, Texas, shooting ended with the husband-suspect surrendering after an hours-long standoff—his car had been boxed in by police in a residential cul-de-sac following a chase. It was the man’s critically wounded, fifteen-year-old daughter who called 911 and “later warned deputies that her father planned to go to her grandparents’ home to kill them,” reports the Dallas Morning News. Police reported that the husband was “cool as a cucumber,” a certainly chilling detail in this tragic story. The story is still developing and authorities have yet to release the names of either the suspect or the victims.

The Powers That Be — And thus falls UT-Austin president William Powers. He announced yesterday that he would step down from his post in June 2015. UT System Chancellor Francisco Cigarroa, who called for Powers’s resignation last week, said “there was no single incident that prompted my decision to ask President Powers for his resignation last week, but a long history of issues with communication, responsiveness and a willingness to collaborate.” This is the latest development in what has indeed turned out to be a long history, marked by the possible impeachment of embattled UT Regent Wallace Hall, who made some harsh allegations about Powers; Cigarroa’s own announcment to leave by this year’s end; and now a shakeup at the top of the UT system’s flagship university. National media like the New York Times and Washington Post have even weighed in, saying this saga highlights a major issue in higher education in general, namely, “that fundamental change is needed to turn universities into engines of economic development for their states and reduce their roles as centers of scholarship.”

Grip and Grimace — Governor Rick Perry pooh-poohed the invitation of a “handshake meeting” with President Barack Obama, asking instead for a longer audience with the prez to talk about the unfolding border crisis. So the president agreed to a fifteen minute meeting. It must have been like a speed date since in that time frame “Perry laid out his concerns and suggestions, and Obama implored him to help get the funding request [of about $4 billion],” according to the Austin American-Statesman. Apart from producing a caption-worthy picture, the meeting seems to have shown just how skilled Obama can be at political judo. Both men said the meeting was “constructive,” but it was Obama who seemed to really leverage the moment. The president said he’d consider putting more national guard boots on the groud, per Perry’s request, but pivoted quite well to his message of across-the-aisle cooperation. “As far as I could tell, the only disagreement I had with Gov. Perry was that he wanted me to go ahead and do it without Congress having to do anything,” Obama said. “The bottom line is there’s nothing the governor indicated he’d like to see that I have a philosophical objection to. … If the Texas delegation is prepared to move, this thing can get done next week.”

Cash Backflow — BP is requesting the $5 million it gave Texas in 2010 for the Deepwater Horizon disaster to be returned to the company, reports the Texas Tribune. The company claims the state hasn’t spent any of the grant for clean-up, and that it “has allowed the funds to sit in its General Revenue account, earning $20,871.63 in interest over the past three years,” wrote a BP attorney wrote in a letter. “As such, BP respectfully requests that the State of Texas return the unused and unneeded $5 million grant to BP.” In response, Perry sent a letter “‘respectfully’ denying the company’s request for a return of the money and arguing that ‘the State cannot accept an arbitrary deadline to expend the funds.’ The letter went on to say that the money would be used for a ‘website and grant programs.'”

Is Lance Armstrong About to LiveStronger?

Houston Has a Family in Forbes’ Top Ten Rich List