We’ll go ahead and predict an unanimous decision that these robes should be required for all Texan-born judges. You know, if the court ever takes that up.

Crisis at Home — Who could have expected the question of terrorism and Syrian refugees to affect Texas like it has? Rounding out a week of charged rhetoric from lawmakers, Agricultural Commissioner Sid Miller made what is probably the most controversial remark in another one of his firebomb Facebook posts. “In a post on his campaign Facebook page on Wednesday, the Republican juxtaposed two images: one showing a twisting mass of snakes, the other a crowd of refugees,” notes the Texas Tribune. “‘Can you tell me which of these rattlers won’t bite you?’ Miller’s post asked. ‘Sure some of them won’t, but tell me which ones so we can bring them into the house.'” 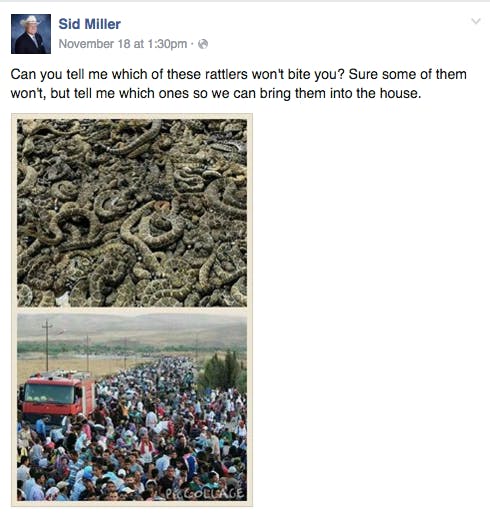 Meanwhile, Governor Greg Abbott pushed back against pretty much every legal expert who said he doesn’t have the authority to block the arrival of Syrian refugees. Appearing on Sean Hannity’s Fox News program, Abbott said “that the authority is included as part of Section 8-1522 of the United States Code. Specifically, he pointed to a provision that says activities by local refugee resettlement agencies ‘should be conducted in close cooperation and advance consultation with State and local governments,'” according to the Houston Chronicle. As if both bolstering and undercutting his argument about the dangers of the supposed refugees, two Syrian families (two men, two women and four children) turned themselves in at the U.S.-Mexico border in Laredo. As The Guardian points out, credit for breaking the new goes to Breitbart, though it reported that the families were “caught.” Despite the publication’s jingoism, authorities really are concerned about an ISIS threat, with none other than the head of Dallas’s FBI office telling NBC DFW that “ISIS [is] recruiting aggressively using social media to target young people and said there’s no doubt they’re recruiting youth in North Texas.” And finally, a seven-year-old white boy is making news because he “emptied [his] piggy bank and brought the money – $20 – to the Islamic Center,” in Pflugerville that was the target of fecal vandalization at the beginning of the week.

Hall Pass — The bad news: Texas kids are still doing really poorly on tests. The (closest thing to) good news: they’re still being allowed to graduate! “The Texas Association of Business surveyed the state’s 100 largest districts; in the 78 that responded, 86.4 percent of students were able to graduate without passing all their tests,” according to the Texas Tribune. The fact that so many kids are being waved through is attributed to the May law that “lets high school seniors graduate without passing all five state exams, if they meet certain requirements.” Like crafty students, it would seem schools have taken full advantage of the loophole. “The association’s study found that in the surveyed districts, 96 percent of the schools granted more than half of the exemptions allowed under the law. Twenty-three schools granted all requests for graduation.” It certainly sounds like an alarmingly high number of high school students are getting by without demonstrating a most basic knowledge of necessary subjects, but not everyone is concerned. The head of one of the main advocacy groups that pushed for the law said the study is overblown. “There has been extensive testimony by parents, educators, students, and testing experts showing that the current cohort of tests is not an appropriate measure for high school graduation,” the president of Texans Advocating For Meaningful Student Assessment told the Tribune.

Adult Consequences — The Affluenza kid is back in the news, except this time some are arguing that he’s no kid at all. “This week, the Tarrant County district attorney’s office filed a motion to transfer [Ethan] Couch to the supervision of an adult court. Without the transfer, under the Texas Family Code, Couch’s probation will expire on his 19th birthday in April,” according to the Fort Worth Star-Telegram. Couch got off essentially scot-free after killing four people while driving drunk and recklessly. His defense famously argued that Couch was too well-off to know the difference between right and wrong, and Couch received ten years of probation. As the story notes, “Under an adult court judge, Couch’s probation terms could change or stay the same.”

Holy War — If you’re not familiar with the Church of Wells yet, be sure to catch up with pieces from Texas Monthly’s Sonia Smith. They’ll add some context to the latest bizarre chapter of the church and its members. Six members of the cultish church were arrested in June after disrupting the sermon of the rich and squeaky clean Joel Osteen. Now, it seems the Wells members may get to punk the famous pastor once again. The group’s lawyer said ” his clients were exercising their right of religious freedom and intend to fight these charges,” according to Houston’s KPRC. To that end, “he’s looking to call Pastor Joel Osteen to the stand at his defendants’ upcoming trial, if their case goes that far,” writes the Houston Chronicle. If Osteen does take the witness stand, it should be as exciting as a tent revival. “At their July court appearance, one of the members called out Osteen for supposed hypocrisy. ‘Joel Osteen is a hypocrite for holding us accountable for preaching the gospel,’ Gardner told the Houston Chronicle. Gardner blasted Osteen as a ‘charlatan’ and ‘imposter’ and said Lakewood was a cult.”

Texas Restaurateur Goes to That Diner in the Sky