“The Aggies need some cupcake games to rest and heal. In my view, Texas is just as weak if not weaker than the non-conference games we play, so we may as well play them.”

We all just want J.J. Watt to be happy. Which is why somebody created an app for the superstar after he said how hard it is to find a date. It’s a twenty question test, and “if the app users gets all 20 questions correct about Watt, it will shoot a verified tweet to Watt with the user’s Twitter handle included,” the Houston Chronicle reports. The app is still in testing mode, so bone up on your J.J. knowledge. 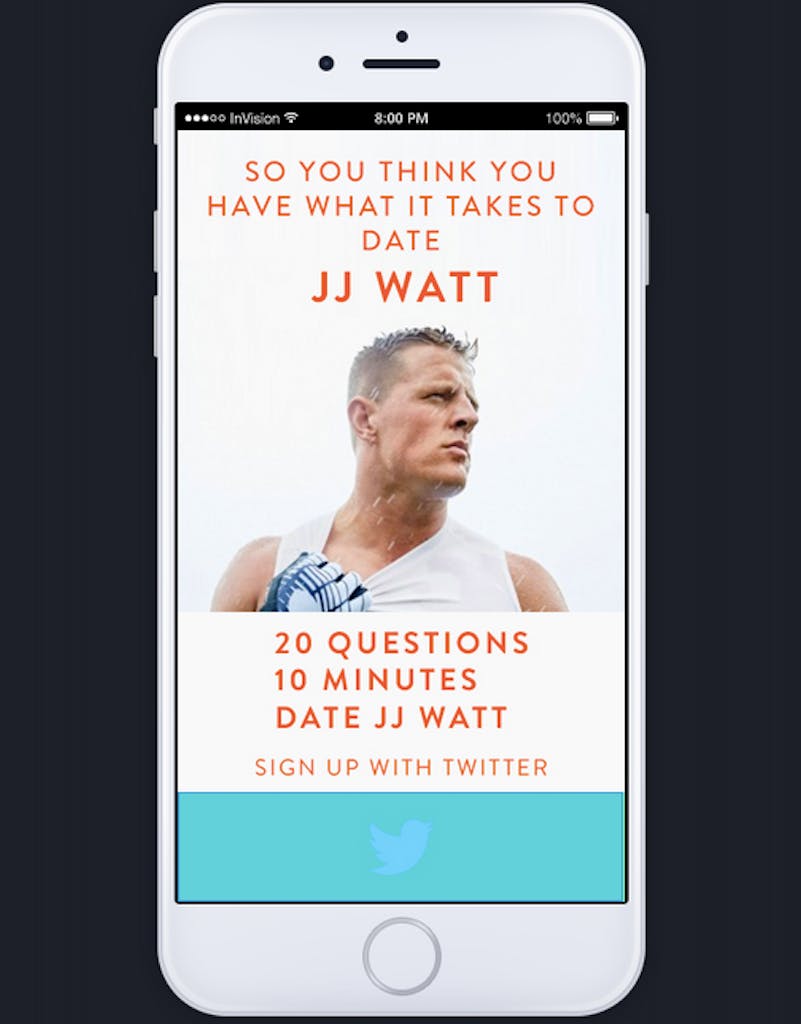 Motorcycle Tales — GQ went all in on May’s Waco Twin Peaks shooting, but it’s still as confusing as ever. Presenting the piece as part oral history and part summary, the narrative that emerges is that the Cossacks and the Bandidos really don’t agree on hardly anything aside from their collective dislike of law enforcement that conducted sweeping arrests. To wit: “Anonymous Cossack #1: The Bandidos invited us to [the COC meeting at Twin Peaks]. That’s why we were there earlier than any other club. We were told, ‘This meeting is about us stopping all this crap.’ The agreement was made by a Bandido named Marshall Mitchell. Marshall Mitchell (Bandidos): That’s a lie. That is an absolute lie. They were never invited. Categorically absolute b.s.”  The piece also dives into the bloodbath itself in pretty graphic detail and isn’t shy about presenting the bikers’ thoughts on the matter. “Some bikers believe there’s an even more sinister explanation: that a firefight of some kind was supposed to happen—that it was all part of a plan by the Waco P.D. to provoke bitter rivals into a public brawl that could be violently crushed and then used as a basis for sweeping RICO indictments.” The whole thing is a very interesting read.

Tough Therapy — Lieutenant Governor Dan Patrick is not having it. As debate (and a lawsuit) about the budget cuts in therapy for children and the disabled continues, Patrick said unequivocally, “Anyone claiming the Legislature arbitrarily instructed [the Texas Health and Human Services Commission] to save taxpayers $100 million by eliminating waste, fraud and abuse without consideration of the potential impact on Texas’ most vulnerable citizens — is just flat wrong,” In his statement, he also worked in a nice theoretical, noting he has a “‘long record of fighting for children with disabilities,’ but that therapy services were a ripe target for fraud,” according to the Texas Tribune. And apart from possible fraud, Patrick and Senate Finance Committee Chairwoman Jane Nelson said costs have skyrocketed over the past few years, “from roughly $436 million a year to an estimated $722 million from 2009 to 2014,” quotes the Dallas Morning News. The changes were supposed to go into effect today before a state judge last week delayed the cuts.

Taking Action …. Finally — Looks like Texas is finally starting to understand that abstinence-only education not only doesn’t work, but has the opposite effect. “Large numbers of poor teenagers will be able for the first time to get free birth control from the state as officials aim to reduce Texas’ high teen pregnancy rate, state health agencies announced Wednesday,” according to the Morning News. It’s sort of a nice first step. But it looks like teens have to be really, really poor to qualify: “the family’s combined income must be below 200 percent of the federal poverty level.” Still, it’s a good start, because something has to happen. “In 2013, nearly 46 percent of Texas high school students reported that they had had sex before they graduated. The teen birth rate is fifth-highest in the country, and Texas leads the nation in repeat teen pregnancies, according to the Centers for Disease Control and Prevention.”

Futbol Country: Frisco to Be Home of National Soccer Hall of Fame

The Women on Death Row

Contain Yourself: The Lonesome Dove Cast is Having a Texas Reunion