Texas Tribune reporter Aman Batheja pinpointed what is a common mistake among non-Texans. Namely that the state is as big as about six and a half countries in Europe. A “BuzzFeed ad helpfully describes tiny Texas town as ‘located between Dallas and El Paso,'” noted Batheja. You’re going to have to be more specific, Pecos-related ad: 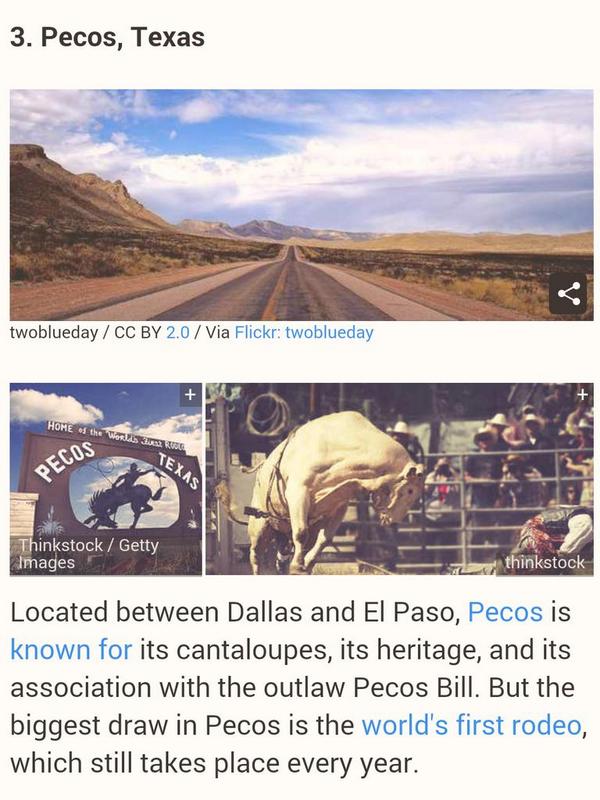 Apparently, being able to tell white people apart is a problem even for Texans. Yesterday, it was Talking Points Memo using a picture of Dan Patrick for a story about David Dewhurst and his felonious campaign staffer. Today it’s Wendy Davis. The Davis campaign tweeted out a photo (at the time of writing, it’s still up) of “supporters” who voted for Davis. The only problem? It was a photo of the College Republican Federation of Virginia supporters helping out Republican Senatorial candidate Ed Gillespie, tweeted last month.

Ebola Watch: Day 22 — Knock on wood, or whatever else is not infected, but it seems now we’re just having to deal with the fallout of Ebola. Not that it’s all that pretty. Dallas nurse Amber Vinson is Ebola-free. So is the dog of Nina Pham, Bentley. That said, the Tribune has a pretty tough assessment of the state’s performance since the virus emerged. Governor Rick Perry “and other Texas leaders are pointing fingers at the Obama administration” and his task for is “recommending that the state give its health officials more power to quarantine people at risk for infectious disease.” All well and good, except, “Missing from the official talking points is the reality that the state of Texas had full legal power from day one to order travel restrictions or impose quarantines on nurses or other health sector workers — indeed, almost anyone suspected of posing a public health threat — but did not use that power.” As for those Texans who’ve suffered from Ebola, it looks like they won’t have much recompense after official missteps. Thanks to Wendy Davis’s wheelchair ad, many Texans are at least vageuly aware of the state’s tort reform laws. As previous reported, Thomas Eric Duncan’s family is considering a lawsuit, but they won’t make it very far. “The first challenge they would face is probably the greatest: proving that Duncan ever had a better-than-even chance of survival once he’d contracted the virus,” explains the extremely detailed and informative Texas Observer piece. Not to say the hospital hasn’t already taken a hit financially. “Emergency room visits at Texas Health Presbyterian fell by 53.3 percent since Oct. 1 compared to the prior nine months,” reports CNBC. “Those 2,336 fewer patients were the primary reason that revenue at the hospital also fell, by $8.1 million, or 25.6 percent, Texas Health Resources said in the filling.”

Pay To Play — Athletes at the University of Texas could-maybe-possibly get compensated in the near future. The fact this this is still theoretical needs to be stressed since there seems to have been some confusion over the issue. Speaking at a forum yesterday, Steve Patterson, UT’s men athletic director, said the university would “spend nearly $6 million a year to comply with a string of recent legal rulings requiring colleges to be more generous to their scholarship athletes.,” according to the Dallas Morning News. “That money will break down to about $10,000 for each player. The money will cover college expenses that aren’t covered by a traditional full scholarship and give each player $5,000 in compensation for the university’s use of his image.” All of this follows a very big “if.” As in “Assuming the new policies survive the legal appeals process.” The confusion about whether this quasi-salary is happening or not stems from a DMN article that inaccurately said the financial package was happening. This prompted publications like the Austin Business Journal to jump on board as well (the DMN has amended it’s mistake, the ABJ has not). What isn’t theoretical is that the series of rulings will have major implications for how athletic departments, big or small, run their programs. The phrase gets overused in politics a lot, but this is a real game-changer.

Vigil-Ain’t-E — Vigilantes simply trying to take border security into their own hands sure can’t catch a break lately. “For a second time this week, a member of a controversial group of armed civilians patrolling the border for undocumented immigrants near this city was arrested, court records show,” according to the San Antonio Express-News. “Agents of the Bureau of Alcohol, Tobacco, Firearms and Explosives arrested John Frederick Foerster, 44, of Brownsville on Tuesday on a charge of felon in possession of a weapon, according to a spokeswoman for the U.S. attorney for the Southern District.” In all fairness, the arrest doesn’t have too much to do directly with Foerster’s recent display of patriotism, but rather the fact that felons aren’t, you know, allowed to be armed. Foerster’s previous run-ins with the law include a felony burglary and “possessing a switchblade and knuckles.” As the story notes, federal agents arrested a member of the American Patriots was arrested on Monday on similar weapons charges and “In September, another American Patriot was arrested on a felony charge after he allegedly left a 9 mm handgun, for which he carried no license, in a convenience store bathroom.” Maybe the group should focus on background checks the next time it recruits members.

Baby You’re A Less Poor Man Too — The state’s recent economic boom is giving those at the bottom a leg up. “New figures from the U.S. Census Bureau show a declining poverty rate in Texas,” reports 1200 News Radio, which uses that basic fact to assert in the very same sentence that this figure helps dispel “common complaints raised by Democrats that Texas’ economic growth has been largely a low wage phenomenon.” Kinda needless taunting, 1200 News Radio! Also, this might not be true on deeper analysis. Still, “Numbers crunched by the Texas Public Policy Foundation, a conservative think tank, show that the state’s poverty rate has fallen to 15.9%, or about the same as the national average” and that “California, with a similarly diverse population as Texas, has proportionately 47% more people in poverty than does the Lone Star State.” Whether you’re apt to think this economic assessment is comprehensive or not, at least we can all agree that Texas is certainly better than California.

Building Better Lives —Thanks to the economic boom, it seems the entire state of Texas is under one giant construction crane. There’s just one major problem: there’s no one to operate the dern crane. “Almost half of Texas construction companies say they are losing workers to other, higher-paying industries,” according to the DMN. “Eighty-three percent of construction companies surveyed by the Associated General Contractors of America said they are having a tough time filling worker positions including carpenters, equipment operators and laborers. … In Texas, more than 90 percent of construction companies reported challenges with finding workers. … And 48 percent of construction firms reported that they had lost workers to other industries in the area. Thirty percent said some of their workers had left the area to work in jobs outside the construction business.” Apart from literally constructing their own stairs for upward mobility, workers are also taking advantage of all the money to be made in oil, turning in their nail guns for shale shakers. Might be time for Governor Perry to start touring the really poor countries, encouraging their grunt workers to move to Texas

When Chuck Norris Came To Texas, Greg Abbott Voted For Him