Devotion to Whataburger knows no bounds. The state’s favorite food chain tweeted out a photo of a pair of one-of-a-kind sneakers by San Antonio designer, Dank Customs. Though the tweet, like the limited edition shoes, is now gone, you can still check out the kicks here. Up next: specially designed Whataburger underwear. 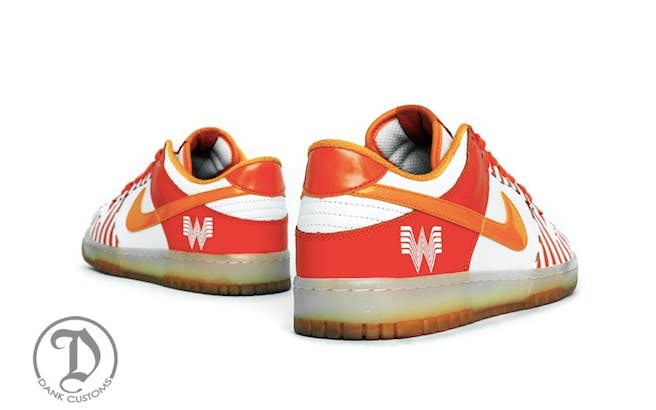 Cruz’n — Ted Cruz is adopting a tortoise kind of mentality: slow and steady wins the presidential race. He’s picking up small wins along the way, like Lieutenant Governor Dan Patrick’s official endorsement Sunday, a big get that pretty much shores up Texas for the freshman senator. “Patrick, who will serve as the Texas chairman of Cruz’s campaign, hailed the senator as the only candidate who can truly energize the GOP base in not only the primary but also the general election,” writes the Texas Tribune. Cruz had another little victory in his home state: “He has the backing of more than third of Republicans in the Texas Legislature, he has been endorsed by about a quarter of the GOP members of the congressional delegation and he has raised more money from Texas than any other candidate.” This all adds up to a bit of a coup for Cruz, who previously clashed with Patrick when the then-state senator backed Cruz’s campaign rival for U.S. Senate, David Dewhurst. As the Tribune notes, the last little fight for Cruz is (the maybe floundering) Jeb Bush and that family’s dynasty. We all know how George W. feels about Cruz, but the Senator doesn’t seem that concerned. He “offered his usual praise for the family but suggested their political brand may be out of date with the GOP failing to win the White House for two elections now.”

Drug Dealings — On Thursday Buzzfeed broke the news that Arizona and Texas “attempted to illegally import sodium thiopental from India this July for use in executions, but the Food and Drug Administration stopped the shipments in the U.S. before they could leave the airports.” The Texas Department of Criminal Justice maintains that it “obtained a license from the DEA to import” such drugs as sodium thiopental, while the FDA “has consistently maintained that importing sodium thiopental would be illegal.” Texas, Arizona, and Ohio all hired lawyers “to help them obtain execution drugs that the U.S. Food and Drug Administration and a related court order have declared are illegal to import,” according to Buzzfeed’s latest piece. “Texas . . . retained its outside counsel starting in October 2014 to provide it with legal advice regarding ‘specialized procurement'” and the state “. . . authorized $25,000 for its contract, which likely has been extended for an additional term.” The FDA told Buzzfeed that it is following standard procedure, although it didn’t give a time table for its “evaluation” of the drug shipment. The whole story is worth a read, particularly the entire section about Texas’s dedicated (and secretive) efforts to get the drugs by just about any means necessary.

University of Life — The fight over affirmative action is gearing up for another round. The University of Texas has been fending off a lawsuit by Abigail Fisher, who was denied entry into the school because UT has specific requirements that she did not meet. Fisher claims she was denied because she was white. UT does consider race in its admission, and in the brief it filed with the Supreme Court Monday, said it “needs to consider race in admissions if it wants a diverse, representative student body,” citing “its troubled racial history, noting that a black student wasn’t admitted to the school until 1950,” according to the Tribune. “The school also stresses that race [and diversity] is still an issue on campus today,” citing the brouhaha over the Jefferson Davis memorial. And what are UT’s chances? “The last time the Supreme Court heard the case, it ruled that schools may use affirmative action, but only if they can show that race-neutral policies don’t do the job of diversifying their student bodies.” Oral arguments are expected to be heard in December, with a decision to be handed down “sometime next year.”

At the Courthouse — One of Texas’s long and curious gay marriage battles may soon be settled. “A state appeals court has reaffirmed its earlier decision to validate the marriage of a transgender widow seeking the estate of her firefighter husband who died battling a blaze,” writes the Associated Press. “The ruling Friday by the 13th Texas Court of Appeals sent the case of Nikki Araguz Loyd back to a Wharton County judge who originally voided the marriage because Texas did not recognize same-sex marriage.” The Court of Appeals previous decision had declared Loyd’s marriage valid “due to a change in the Family Law code that states that a person who has had a sex change is eligible to marry a person of the opposite sex,” according to ABC13. Not that any of that really matters since the Supreme Court ruled gay marriage constitutional this summer.

Another Lose — Numerous publications across the country have reported on the incredibly sad news of Sunnyvale widow Patti Stevens’s death. Two weeks ago, Stevens’s husband was brutally (and randomly) attacked with a machete while jogging near White Rock Lake. Authorities are pretty sure Mrs. Steven’s death is a suicide. “Neighbors told the station that friends discovered Stevens’ body in her garage and first responders were later observed opening doors and windows,” writes Fox News. The suspect in the case of her husband’s death is 21-year-old Linze Johnson, the Texas A&M football star who left the team without notice, and whose family suspect has serious mental health issues.

No, Crazy Texans at Haunted Amusements Are Not Eating Innocent Children

Sid Miller, Our Protector of Fried Foods, Fights Off the Bacon Haters

How Do you Say “Y’all” in Chinese?

Texas Students May Not Be as Dumb as Everyone Thought