Some people have a problem with woman doing a very natural, life-giving thing in public. As the battle continues to embrace breastfeeding in public, one group of women is making you think twice before objecting — and not just because they could kick your butt. A photo of nearly a dozen Fort Bliss soldiers breastfeeding their children, looking about as offensive as a bed of flowers, is going viral for all the right reason. It was originally removed from Facebook, but has since been put back up and remains there now. 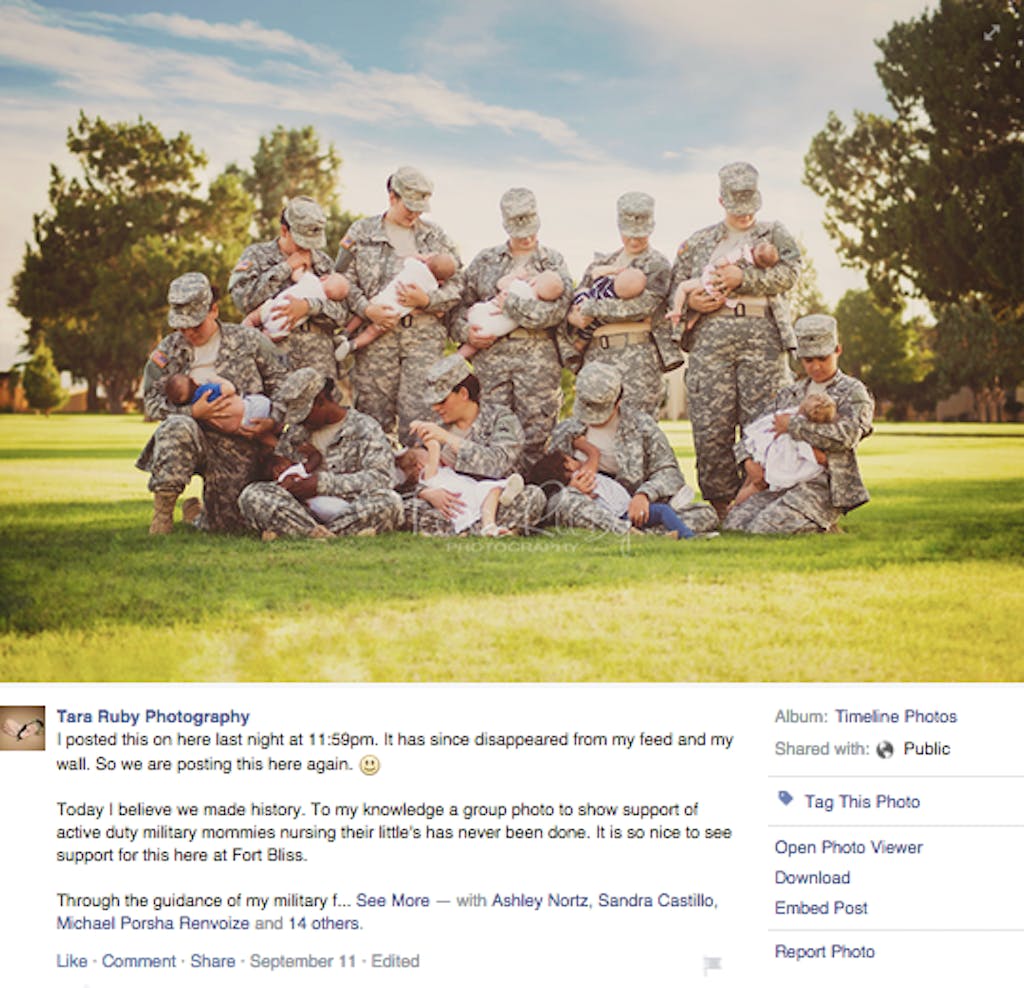 Trump Stump — Presidential candidate Donald Trump returned to Texas on Monday night in his effort to Make America Ridiculous Again (or something like that). It certainly went better than last time, when he went to the border and said every migrant was a murderer and rapist. The Donald “regaled” the crowd of about 16,000, “bragging about his business acumen and pledging to aggressively deal with illegal immigration and companies that move jobs overseas,” reports the Dallas Morning News. Perhaps in an attempt to reach across the aisle, Trump also promised to “bolster women’s health care and the energy industry, and to boost tax revenue from companies that are keeping profits overseas.” Perhaps the best write-up comes from the Texas Observer‘s Christopher Hooks: “His speeches are not meant to be understood in the traditional sense. …  [Trump] tends to throw out subjects, nouns and verbs and then bask in the applause or disapproval of his adoring audience.” Because Trump is Trump, people had a lot of apparent feelings about his event. “[B]oth the number of protesters that have become common outside his campaign events and the intensity of their clashes with Trump supporters reached new heights,” writes Politico. “As it ended, attendees filing out, mostly white, clashed with 200 or so lingering protesters, mostly black and Hispanic. Police intervened in several heated exchanges, including some involving members of the Black Lives Matter movement. Protesters then chanted a Spanish profanity at attendees. After attendees dispersed, dozens of police officers, including several on horseback, pushed protesters off arena property in a tense standoff.” How many days are left before the election, again?

Sad Perry — Trump’s Texas timing was unfortunate for our former Guv, who spent Monday mourning his failed campaign. Although experts and opiners had already offered armchair analyses as to why Perry crashed hard and quick this go around, the former governor had his own theories. “His lingering indictment and his failure to make the first prime-time GOP debate in August doomed his campaign as the summer drew to a close, Perry also said in his first interview since dropping out of the race,” the Houston Chronicle writes. Perry also lamented to Fox News’ Sean Hannity: “Either you’re a billionaire or you have billionaire backers, and the real issue for us is that we ran into those headwinds.” Exiting with moxie, Perry referred to Travis County DA Rosemary Lehmberg, a key player in Perry’s indictment, as “‘this drunk DA that had used this office, we think, for political purposes,'” the Texas Tribune reports. He also took a “not-so-veiled swipe at billionaire Donald Trump” for showboating. According to the Chronicle, Perry “declined to formally endorse any candidate in the crowded Republican field, saying ‘we got a lot of vetting to do’ before he throws his support behind anyone.”

Game Review — Don’t worry! Another Texas referee was not hit by a high school football player. But the past two weeks have been enough for reflection (and punishment). Because ostracizing kids who’ve done wrong rather than teaching them to be better humans has always worked in the past, the two players from John Jay who targeted a ref during play have been moved to an alternative high school. “Northside Independent School District issued a statement Friday saying the two players from John Jay High School in San Antonio were moved while they await a disciplinary hearing,” according to the Associated Press. As for the other San Antonio player who attacked a ref the following week, he’s been removed from the team and suspended for three days. The St. Anthony player’s “on-field punishment is more than the standard five-game minimum suspension for this type of offense,” according to KSAT12. “Asked if Cardenas’ increased suspension had anything to do with the previous week’s player-referee hit, [St. Anthony Dean of Preparatory Programs Dan] Ochoa said the decision wasn’t based on the other players’ actions.” As for how Texas refs are holding up, ESPN has an interesting look at the lives of the men who volunteer to be a high school stadium’s collective bad guy. As the story notes, “Several Texas high school football refs cited fellowship and the fondness for Friday night lights as reasons they enjoy their part-time jobs, even though these ordinary Joes are occasionally the least-popular folks in packed stadiums, log long hours and aren’t paid particularly well.” The piece does a good job of not sensationalizing the unfortunate incidents. “Few refs have even felt threatened while working a football game, much less ever seen anything like those hits. … If they weren’t having fun, several of the refs said, they’d find another way to fill their Friday nights in the fall.”

Round 100 in the San Marcos Landowners Vs. Tubers Fight